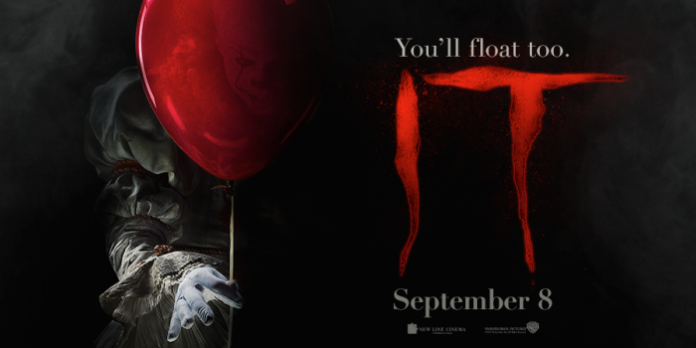 Sitting there watching the clown trot out his plop poor routine it all became too much. ‘Why don’t you take your sad act elsewhere and clear off?’ You would not believe the trouble I got into for saying that. Admittedly I was four years old and it was my birthday party but if perhaps Pennywise had been the clown I’d have been terrified into silence. Those who remember the TV version of Stephen King’s book will be only too familiar with Tim Curry’s clown which ruined the reputation of the whey faced pultroon’s who ply their trades driving collapseable cars and wearing spinning bow ties. Curry’s clown inspired a thousand sleepless nights so when a film version was mooted way back in 2010 many were derisory about it but despite the film having a troubled pre-production which is never a good sign the resulting film is superior in every way to the TV version.

Set in King’s version of a 1980’s  Maine rather than the 1950’s this starts in suitably gloomy style with torrential rain battering the streets as Bill Denbrough (Jaden Lieberhar) makes a paper boat for his little 6 year old  brother, Georgie,  to float in the rain filled street gutters. It’s the film’s most upsetting scene when the cherubic child meets Pennywise trapped down a drain imploring the child to join him. So when the child says, ‘Ben’s going to kill me’ what happens next is as horrific as it is upsetting with the film’s most disturbing image. But it sets the tone that the film is no made for TV special with all its limitations on what cannot be shown. What follows is a disparate  group of school friends called The Losers Club all of which are outsiders for the usual trivial reasons that kids ostracise and pillory others who don’t fit the norm. So you have the boy with a stutter, the fat kid, the kid with glasses, the one with an allergy etc etc and their differences unite them as friends and their strength as a group is a defence from the school bullies. Much like Kings’ ‘Stand by me’ their friendship has a credible resonance which has always been a strength of King’s writing when it comes to writing about childhood.

With the disappearance of little Georgie the town has a veil of melancholy about it as he’s not the only one to have disappeared as other children have too every 27 years and the killer clown is at the centre of it and again much like ‘Stand by me’ where the friends go looking for a dead body in the woods this group go looking for the clown.

Much was made of Curry as Pennywise but Bill Skarsgard, who takes over the role here, ratchets it up a notch with his flaky bulbous head, eyes pointing in different directions (with no help form CGI apparantly) and his grubby Victorian era clown costume and there are several jarring, shocking scenes notably an extended set piece in a disused house and another with a slide show the kids watch in a garage.

Director Andy Muschietti, whos previous film ‘Mama’ proved his worth at scares has done a great job with Kings book which was a massive tome and this focuses solely on the first part of the book dealing with them as children and he has cast well as each of the kids is believable especially Jaden Lieberhar grieving over the loss of his little brother Georgie. Those familiar with the book will be only too aware that there were some extremely unsavoury moments  that were rightly never going to get in the film but the film is better for that and opts to hint at the darker elements  including  Beverly’s (played especially well by Sophia Lillis) wrongly regarded as the school slut whereas the truth is that there are hints of an incestuous back story with her widowed father.

This is far superior version to the TV version for which many will have rose tinted memories but this update sweeps it aside with aplomb. Towards the end they do that bizarre thing where they make a cut in their hand and hold their bleeding hands in a circle so our fingers our crossed that they make part two before the characters get hepatitis because this is a great, if perhaps slightly over long, Chapter One.