It’s difficult to equate the diminutive stature of director James Wan with some of the biggest hit films which will inevitably include the new Aquaman film. Along with actor / writer Leigh Whanell they made ‘Saw’, a $1m micro budgeted film that grossed a $100m+ and spawned a franchise that saw (sorry) a film released every Halloween.  With Whanell’s spooky scripts Wan single handedly showed others how to make horror scary again proving it with ‘Insidious’ which launched three more films and ‘The Conjuring’ which will shortly go into production on its third film though regrettably not directed by Wan.

Understandably he wanted to shake off the horror director tag taking on ‘Fast and Furious 7’ which made a not inconsiderable $1.5billion making it one of 2015’s biggest films. The following year would see the launch of the DC extended universe with Batman v Superman and though it did well at the box office (although it didn’t break the magical $1billion). The fans on the other hand had a far cooler response. Wonder Woman changed all that only to find that the superhero get together Justice League met again with fan ambivalence.

It’s stand out character though was Aquaman and as played by Jason Momoa was rock ‘n’ roll through and through. Like Superman he had an alter ego, the less than dynamically named Arthur Curry, and was a bit of a joke to comic book fans so why did Wan choose to take on the Aquaman film?

‘Well I’ve seen Flash on TV but I’ve never seen the Aquaman character done before’ said Wan, ‘and I thought, ‘This might be interesting to come round to it because we all know that he’s a joke in pop culture’ and the more I thought about it the more I thought there might be something interesting I could do with this guy and the world that he inhabits.’ It wasn’t the only problem Wan would have. Aquaman was a half breed: half man, half fish, so whilst it was land dwelling sense presented little problem  an underwater world was a different matter altogether with perhaps only James Cameron’s ‘The Abyss’ being remotely similar but that was real water and the Aquaman film cast had to speak to each other underwater.

‘James pushes himself to the limit and beyond and he likes to do things that are outside of the box and that’s why we all love what he does.’ Wan added,’ With this film we knew that there would obviously be a lot of visual effects involved but also coming from an indy low budget horror background I wanted to do as much of it practically as possible and also with the actors it just helps them out so much more if you can touch and see certain things.‘ 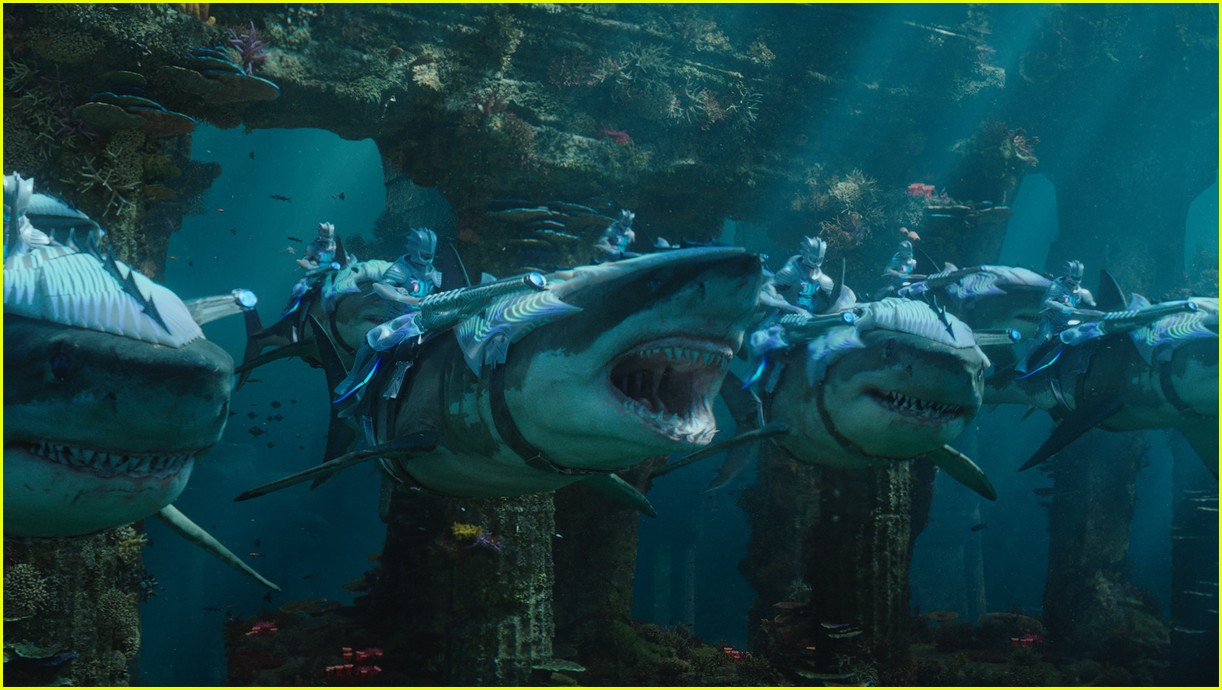 The Aquaman film was to be a massive undertaking with the underwater set mostly green screen with water digitally added after. ‘If I can put them in a set or use visual effects to extend the set and we did tones of set extension in this film but if the actors walk, touch or sit on things you get to build them. I try not to forget my roots in practical film making.’ enthused the director.

Relocating to Australia the Aquaman film sets were built in Warners studios where the Matrix films were also shot. Add to this a ton of state of the art digital effects the actors were then to find themselves in some good old fashioned heavy duty rigs to assimilate the floating in water effects.

Actor Patrick Wilson who plays Aquaman’s jealous brother Orm joins us as we chat with Wan gleefully pointing out the actors socks with a shark motif.  Wilson is happy to be wearing comfy clothes again recalling the discomfort of the shoot especially the rigs they were strapped in to get that ‘floating in water’ effect. ‘A lot of different harnesses, cables, teeter totters this thing that’s like a giant tuning fork that we would sit in. It all depended on the move. Sometimes if it was just a close up you’d be literally just a few inches off the ground.’ Wilson grimaced at the memory of it all.

But Wan ever cheerful reminds him of one of the devices they used to achieve the effect, ‘It’s literally like a see-saw right? You stand on a platform and we just jack him up and he’d just sort of float like that!’

Wilson does see the funny side in fact the two of them clearly love working together with Wan having cast him in several of his previous films but Wilson goes on to say, ‘if it’s a full body shot you need to know how to swim because honestly I was with Willem and we felt like we were doing some strange avant-garde theatre. We really loved it and once we got cast it and I couldn’t feel my hips anymore. Maybe it’s because it was Willem Dafoe and he’s got such a huge theatre presence. In hindsight I always thought that doing green screen would be terrible for actors but honestly it felt amazing it felt like theatre maybe it was just the strange dialogue’

Aquaman as a comic book had been around since the 1950’s and modern audiences had had their first encounter with him in Justice League and its contemporary setting and here he was to have giant seahorses, a classic costume. But Wan and his screen writers knew how to make an Aquaman film feel current.

‘Well I think it’s incredible’ enthused Wan,’ because we’re saying right now how bad the environment is going through upheaval and coming from California with all these fires and everything has this massive natural disaster. There’s no way you can do an Aquaman story without touching on the environment  and I think as the world is getting shittier the character is getting more and more relevant. Sure Patrick’s character is the antagonist in this story but his intentions are not quite wrong. I don’t see him as a bad guy at all he’s just sick of all the crap we as surface dwellers do and I think that’s very topical and it’s interesting to tie his character in with this sort of nationalistic mindset of Atlantis and how they see themselves as the more superior race and all that stuff seems very topical right now’.

Wilson warms to the director’s theme too, ‘Well you never play a bad guy as a bad guy like Hans Gruber. I don’t think he viewed himself as a bad guy and I think that’s why he counteracts with Black Manta so well because you see manta’s journey of avenging a father. It’s primal and clear cut. So counteracting that you’ve got this very human struggle with his brother and the way he was bought up. His other not getting along with his father you know all this stuff. You know he’s heard about this older brother and he knows deep down he’s the first born even though he’s a half breed…even in the comic he has a lot of rage. Anger as an emotion is easy as an actor to go to but you have to find where that is coming from and there’s so much rooted in his story line. Anger at the environment, anger at the surface dwellers, at the way they treat it and then this first born son comes in to challenge for the throne. That’s my ark and that’s easy to play.’ Both men are hugely enthusiastic about the film and rightly so with the film visually stunning and different from the others in the DC stable and Wan’s version of the character is confident and different from many of the superheroes we’ve seen before.  With the Aquaman film already opening in China to impressive box office figures the fishman’s future  seems assured.