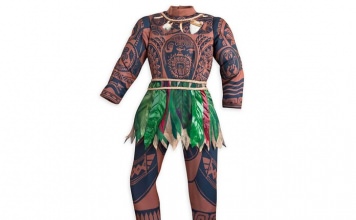 Disney are usually pretty fastidious in their attention to detail but may have scored something of an own goal regarding their new animated film, ‘Moana’ based on Polynesian legend where a young girl is joined by a Polynesian God (Dwayne Johnson) to navigate their was across the sea to a mythical island.

As merchandising is such a potent moneyspinner for every film and Disney especially are no different but unfortunately here they’ve quickly pulled from the shelves the Polynesian demigod Maui costume.  Similar to the costume of Dwayne Johnson’s character it consists of a dark skinned, long-sleeved bodysuit of tattoos with a leaf skirt.

They were already on shaky ground selling costumes based on Polynesian mythology and gods in the first place but when users on social media (including Native Hawaiians) started raising their objections to dressing a child in the skin color of another race raising memories of the black and white minstrel show with many saying it was “worse than Black Face” it was clear Disney had to at.  In fairness they have been quick off the mark removing the costume and offering the following statement: “The team behind Moana has taken great care to respect the cultures of the Pacific Islands that inspired the film, and we regret that the Maui costume has offended some. We sincerely apologize and are pulling the costume from our website and stores.”

Can’t help but feel that whoever had the idea for the costume in the first place is unlikely to be working for Disney much longer.

Moana opens in the US on November 26th and in the UK on December 2nd.