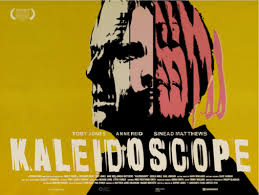 Back in 1966 we had a film called ‘Kaleidoscope’ starring Warren Beatty in what was a pretty average  comedy and much like its title it was all glittery with plenty to distract but of little substance. The latest film with the same title is a very different affair. Starring Toby Jones and directed by his brother Rupert,  both the sons of the great Freddie Jones, it follows a recently released prisoner, Carl, back living in a high rise flat and preparing to go on his first date after 15 years of single–dom.  Toby Jones has always been good at those slightly nervy yet potentially sinister male characters that can veer from kindness and goodwill to sheer anger, frustration and violence and his portrayal here is as edgy as ever With his elderly black female neighbour lending him one of her late husband’s garish Hawaiian shirts he gets ready for his date with Abby (Sinead Matthews), a bit of a lairy good time girl. With her in-your-face attitude to enjoying herself she tries her best to coerce Carl out of his shell but she’s not all what she appears to be either.

But Carl’s night and the following days are to change dramatically with the re-appearance of his mother Aileen, played by Anne Reid another of the great unsung but well known faces of British TV dramas. Aileen is an  interfering busy body with an overly maternal instinct towards her son but, in keeping with the other lead character’s, she too is not quite what she seems to be because much like the toy in the film’s title the story here changes  with every turn and Carl’s mind, bit by bit, becomes ever more confused about what’s real and what isn’t and the mother-son relationship becomes ever more destructive.

Much like the recent British release ‘The Ghoul‘ this is another film where you have to watch and listen to everything because this is one big psychological puzzle which forces the audience to think about just what is (or isn’t) going on. For director Rupert Jones, who has also written the script, this is his first dramatic film after 2013’s ‘The Answer to Everything’ which was his more of a musical and this won’t be for everyone expecting an easy ride and wanting the film to simply wash over them but what he’s crafted here is a not always easy watch but features riveting performances from all three leads.