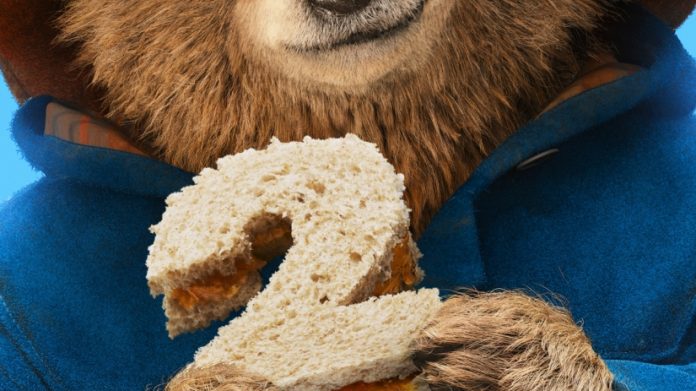 The phrase about what bears do in the woods might well have a been a sly joke used by the poster designer for the Paddington sequel where the beloved bear is literally holding a number 2 in his hands but we digress. The decidedly British Paddington did surprisingly huge business in the US and worldwide the film made $268m an enormous amount for a British film and so a sequel was always going to follow.

Paddington is as loveable as ever as voiced by Ben Whishaw and the sequel gives us a little bit more of insight into his origins in Peru before we return to London where he is now safely ensconced in the family home of the Browns and their children. Settled in and beloved by the whole street apart from an officious self appointed local neighbourhood guard played by Peter Capaldi, Paddington wants to buy his beloved Aunt Lucy a pop-up book of London as a present for when she arrives in London for a visit.  Unfortunately his neighbour, a grandiose actor, Phoenix Buchanan,  played with relish and self parody by Hugh Grant, is also after the book.  Grant’s Buchanan is an actor who has fallen on hard times and is reduced to dog food commercials (one of the films many highlights) and his reason for getting his hands on the book lies more with clues hidden within its pages to the location of hidden treasure rather than any literary desire.

In the time honoured tradition a mix up with Paddington trying to catch a burglar, who has stolen the book from the shop, finds the bear banged up in prison and at the mercy of a fearsome old lag called Knuckles McGinty (Brendan Gleeson) the prison cook who has little if any flair for cooking and who the other prisoners are too terrified to complain. Paddington and his beloved marmalade sandwiches win him over and together they track down the preening Phoenix Buchanan and the pop up book.

It’s a series of comic vignettes and set pieces but the script written by director Paul King and Simon Farnaby, who’s had a great year with his potty Dutch man in Mindhorn being a highlight, have made a lovingly respectful film to the late author Michael Bond’s bear in what is one of the best family films this year which jauntily whizzes along and even at one point slyly references David Mamet’s, ‘bringing a knife to a gun fight’ line from his script for ‘The Untouchables’.  Maybe for some the film may present too upper middle class and clean representation of London but the visual effects department have added some beautiful moments to the film including an animated sequence of the pop up book that owes much to the classic BBC TV series.

The Harry Potter franchise bought just about every British actor of note to the mix and it seems that this could well be the intent here because there are turns by Jim Broadbent and Eileen Atkins to Richard Ayoade & Joanna Lumley and even Simon Farnaby can’t resist a another cameo, here as an inept security guard more concerned with guarding his mug of coffee than catching Hugh Grant in one of many disguises. But apart from our furry friend it’s really Hugh Grant’s film proving, as seen with the recent ‘Florence Foster Jenkins‘ what a superb light comedy actor he is and he throws himself into the role. Perhaps on the downside is that Julie Walters, no slouch in the comedy actress department, is given little to do as the grandmother and the same could be said for Hugh Bonneville also.  But it’s a minor criticism of what is another hugely enjoyable family.

PADDINGTON 2 is out this Friday 10th November 2017