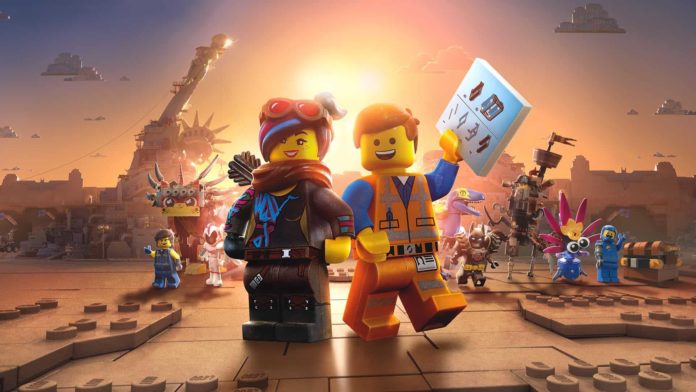 Perhaps the most blatant bit of product placement we’ve ever seen was The Lego Movie but it also turned out to be an unexpectedly huge success of 2014 earning a mammoth $469m so it was hardly surprisingly that The Lego Batman movie and The Lego Ninjango Movie quickly followed. Perhaps it was writer / director Phil Lord & Chris Miller who were so relentlessly self deprecating with their script poking fun at both the Lego product itself as well as other movie tropes that it was so good. So quite why they thought they would be suitable for the sombre, takes itself seriously,’ Solo A Star Wars story’ is anyone’s guess and perhaps might go some way to explain why they ended up getting sacked from it. Animation is  clearly where they are far more at home and have now written the imaginatively titled Lego Movie 2 : The Second Part after their success with Spiderman into the Spiderverse.

Lego Movie 2 picks up off the back of the first film  who’s  big reveal was that the toys were part of the human universe as toys for Will Ferrell and his kids whose daughter is a Duplo building bricks fan and it’s her Duplo bricks which launched an attack on the Lego characters and their world.  Picking up 5 years later  Emmet Brockowski (Chris Pratt) & Wyldside (Elizabeth Banks) living in a bleak apocalyptic wilderness and its ripe for sending up as Wyldside, the more world weary of the two, stares into middle distance profoundly pondering the future  whist Emmet, terminally upbeat, rocks up clutching takeaway coffees for them wondering what she’s looking at not realising she’s having a movie moment. It’s those scenes that, whilst they will go over the head of young children, are what gives the film adult appeal.

They are joined by the usual cast that includes Batman voiced by Will Arnett apparently allowed to improvise his lines to great effect and its him who has an unexpected love story whilst they battle the Duplo characters. So we the cast find themselves in a variety of settings including space as they continue their battle and are joined in their quest by Rex Dangervest also voiced by Pratt who might not be all that he seems.

Lego Movie 2 is breathlessly frenetic  leaving no time even for the most attention deficient disorder afflicted child to get bored and the film much like the first takes in the real world where the two children, now slightly older, playing with their toys. Whilst this sequel is not as good as the first film it still remains as meta as ever if you can keep  up with the furious pace and frantic visuals with jokes galore and even a Bruce Willis cameo and Batman with many of the best gags. Self reverential, Lego Movie is also something of an ode  to the power of a child’s imagination as they play with their toys and to that end you can’t really knock such a film that celebrates such an idea.