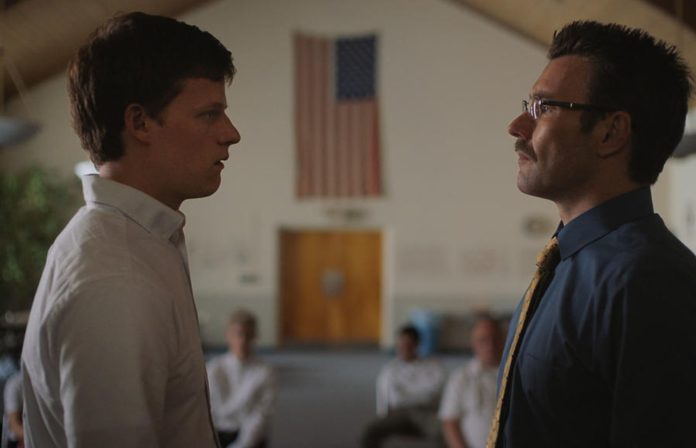 Most of us can think of someone who could be happily erased from history for the betterment of mankind…..Hitler, Mao Tse Tung, Amanda Holden to name but a few but here the boy erased is wishful thinking by the parents of Jared Eamons (Lucas Hedges). In fairness it’s not actually him but more that fact that for his deeply religious parent its the discovery of his homosexuality that has them sending him to a Christian ‘correctional’ centre that enforces religious doctrine. It’s that part of the Bible that states, ‘He who sleeps with another man should be stoned’ which in fairness probably helps.

It’s a centre that’s headed up by Joel Edgerton and at first it all seems pretty easy going if evangelical in its comforting scriptural message of God’s love for man combined with the centre’s physical exercise programme for the students but it is does get increasingly forceful in its attempts at gay conversion (converting them to be straight rather than the other way round obviously).

It’s Jared (Lucas Hedges) who fights the urge to go straight and ultimately knows that he cannot live the life his parents want him to live and it’s ironically the advice from the centre to, ‘fake it til you make it’ that helps him maintain the illusion that he is being converted back to being straight again. Boy erased is as much about his parents struggle to accept their son’s sexuality. His father Marshall (Russell Crowe) is a Baptist minister keen for his son to follow in his footsteps and doing what he believes is right to …um…straighten him out adhering to his own religious principals. Like any decent father he wants the best for his child but keen that Jared should live by father’s moral code. For his mother Nancy (Nicole Kidman) it’s the same but it is her that is the more flexible in her understanding and unlike her husband’s stoic belief in gay conversion ultimately she realizes that they cannot change his homosexuality.  Naturally it puts a strain on their marriage and his parents are not painted as stereotypical ogres which this sort of film so often does.

Written and directed by Joel Edgerton this is adapted from a book of a true story doesn’t get as preachy as you might expect and spares liberal lecturing. Edgerton as the gay conversion teacher is the one who does become increasingly oppressive employing more aggressive techniques to ‘cure’ his students culminating in a scene of quite literal bible bashing as they batter a young man with one. Edgerton coaxes sensitive performances from his three leads and perhaps the biggest surprise is the casting of Flea , bass player with Red Hot Chilli Peppers as one of the centre’s rehabilitators who looks every inch the grizzled disciplinarian. In fact Flea has a quite an extensive acting career having also appeared in the gay themed, ‘My own Private Idaho’ back in 1991.

Edgerton is proving to be a capable film maker after his debut directing thriller ‘The Gift’ and this is another genre proving that he is capable of handling different genres and it’s a step towards the critical kudos and inevitably awards that is surely coming his way.