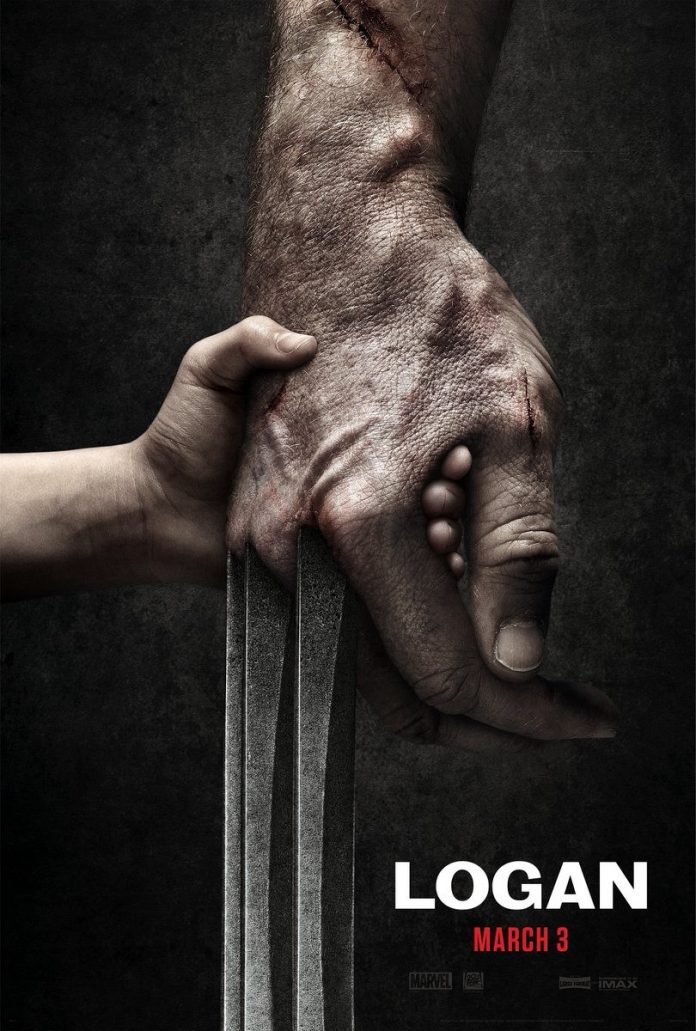 With the blockbusters starting earlier and earlier the first this year is Wolverine 3 or Logan as it title actually is. After playing the character for 20 years over nine films Hugh Jackman is hanging up his talons with this final entry and with 20th Century Fox having had such a box office bonanza with the adult orientated shenanigans of Deadpool they’ve had the confidence to go for the same audience here. And make no mistake this is not for children because for once we see in graphic style the hacking, slashing and stabbing of those blades none more so than the opening scene where Logan, now working as a limo driver, waits in a dark car park on the US Mexico boundary waiting for his client only to find, as President Trump says , some bad hombres, trying to steal his chrome hub caps. It ends spectacularly badly for them. Trump would be proud and this certainly has a political slant to it which is especially prescient even though it was shot before Trump came to power.

Logan, is not only a part time limo driver but also a full time carer for Professor X, wheelchair bound and a shadow of his former self suffering from seizures that ripple through the air causing havoc and for which Logan has to acquire prescription meds from corrupt medics. Logan too is not the man he used to be. He’s covered in scars and wounds that never heal and the aches and pain of long fought battles that still keep him in agony.  Hiding out in a derelict water tower on the Mexican border with Caliban, an albino mutant (played by Stephen Merchant though great still can’t hide his Bristolian accent) they keep a low profile. Into their lives comes a little girl Laura (Dafne Keen) who is being chased by what appear to be mutant hunters led by a metal cyborg handed Pierce acting on behalf of Richard E Grant’s Dr Rice,   What follows is something of a road movie / Western hybrid as Professor X and Logan attempt to get her to a safe place appropriately named Eden whilst battling to prevent her getting into the hands of Dr Rice  and his cronies.

Those expecting a traditional superhero film along the lines of the X-men series will be disappointed as this is a far more sombre and darker tale on a par with Christopher Nolan’s Dark Knight trilogy which is entirely a good thing. No saving the world from super bad mutants here.  The first trailer that wowed everyone with its Johnny Cash tune captures the mood of the film perfectly because this is a poignant farewell that Jackman pays to his character and deals with issues as serious as mortality and responsibility. In fact the film owes much to the classic western ‘Shane’ which it wears on its sleeve even going so far as to have characters watching it on the TV.

After the muted response to the last two standalone wolverine films writer / director James Mangold has made possibly the best X-men film and at times it is brutally violent and sweary which feels a little out of charter when Patrick Stewarts’ Xavier starts dropping f-bombs. At the heart of it all is the relationship of Logan with Xavier and especially Laura who is mute for much of the film and despite Dafne Keen having a presence about her that is reminiscent of a young Christina Ricci it would have benefitted for more scenes between them and at 135minutes it is a little overlong.  Whilst its more adult orientated appeal will ensure good word of mouth it rightly doesn’t have the flippancy of Deadpool that made that such a success and would be inappropriate here.

This is presented as anything but a comic book superhero and is far more grounded and despite the occasional plot hole this is superior genre film making which for some may even leave you struggling to hold back tears.

Here’s the best trailer we’ll probably see in a long while…..