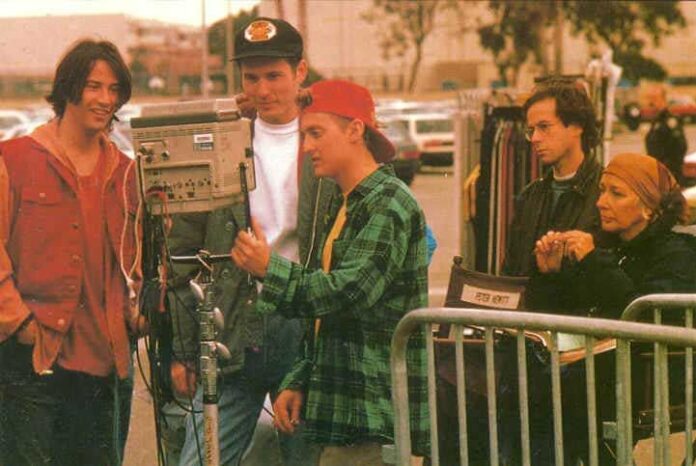 Excellent it may have been, but Bill & Ted’s road to the big screen was famously complicated from the start.  Set up at Warner Brothers, the studio started to get cold feet when Back To The Future was released in ‘85, the suits concerned that its time-travelling plot shared too many similarities. “Originally Bill & Ted time-travelled in a van,” remembers producer Steve Kroopf. “So, we did a draft where we 86’d the van. It was [Excellent Adventure director] Steve Herek who came up with the idea of the phone booth, basically because of the old college gag about how many people you could stuff in one.” Despite the change, the studio put the project in turnaround. It might never have seen the light of day, says Kroopf, if (we) hadn’t “sweet-talked” [executive vice president] Mark Canton into letting it go. “I’ll be honest,” laughs Kroopf of then taking the property out to market. “We didn’t get a lot of bites.” But one that they did was from Agostino ‘Dino’ De Laurentiis. Or, more specifically, his daughter, Raffaella, who was running production for her father’s company. Dad may not have quite understood the appeal – “He didn’t get it,” laughs Kroopf – but Raffaella’s smart call meant not only that the Wyld Stallyns would come to life, but that they’d even go on tour. “Raffaella basically called in a bunch of favours which meant we were able to go and shoot in Italy for 10 days for virtually nothing,” says Kroopf. “And the movie was that much better for it and it was that much better an experience for the crew because of it. We got there, loved it, came back and thought we had the greatest movie ever. And then DEG [De Laurentiis Entertainment Group] went bankrupt. The movie was on the operating table, ready to die.”

But Bill & Ted’s Excellent Adventure didn’t die, it soared. Saved from a straight-to-TV purgatory when Kroopf’s wrangling rescued it from a deal between the administrators and HBO, the movie eventually hit US theatres on February 17, 1989. (Hence the overdubbing in the movie when anyone mentions the originally intended ‘present day’ of 1987.) And while American audiences fell for these unlikely leading men and their poetically exaggerated Californian dialect, what was most impressive was how much the world embraced them, delighting in just how different this all was from the teen movies of the time. “It was incredible how far it travelled,” laughs Kroopf. “Years later I was doing a movie called Terminal Velocity with Charlie Sheen and we did a little bit in Russia. I kept hearing people call each other ‘Dude’. I was like, ‘In Russia?!’”

“It was that language that drew me and Keanu in,” remembers Alex Winter. “It was so different from all the teen sex-comedies that were being made.” Keanu Reeves nods. “Some of them were great,” he says, “like all those John Hughes movies. But this was just so different. That’s why the fans respond to them, I think. And that’s why it was crucial on Face The Music that the idea was perfect. We wouldn’t be doing this without the fans. It’s our way of saying thanks.”

Key to this brave new world of Bill & Ted is Face The Music director Dean Parisot. A student of absurdist comedy and an expert in juggling tone, of his 40 credits, the one that most obviously sums up his unique skill set is Galaxy Quest, the sci-fi comedy that’s become a cult classic thanks to its seamless blend of the hilarious and the heartfelt. “The world of Bill & Ted has a really unique tone,” says Winter. “Not everyone ‘gets’ it.” Not just that, but how on Earth do you go about directing the final part in a trilogy, 29 years after its second instalment – the gloriously insane Bill & Ted’s Bogus Journey, directed by Peter Hewitt – was last in theatres?

Two of the people it particularly fell upon to hold onto, as Parisot has it, the “core” of Bill & Ted, while also moving them forward, were Nancy St. John and Mark Isham. The former is an acclaimed visual effects producer, the latter an Oscar-nominated composer. Both were big Bill & Ted fans before the call came in to work on this movie. Both are even bigger ones now. 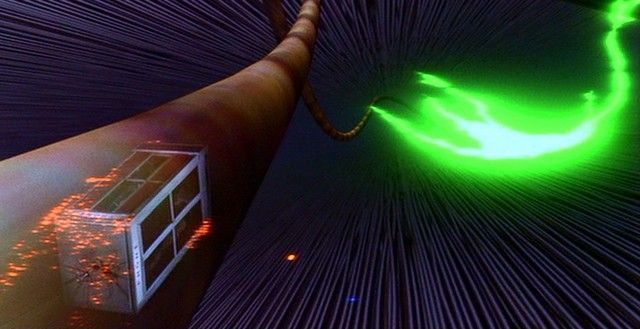 “When you’re dealing with an entity as precious as Bill & Ted, people know every frame,” says St. John. “In terms of the first two movies, you want to establish what was utilised then, but you have to upgrade it.” Charged with creating a stunning digital canvas for our heroes’ quest – specifically three locations in Hell that they find themselves relegated to at one point, a vision of the future inspired by Santiago Calatrava’s “city of light” in Spain, and a cameo, of sorts, for George Carlin’s Rufus – St. John was determined to never deviate too far from the Bill & Ted palette, while always improving it. “Take the ‘circuits of time,’” she says of the way in which Bill & Ted travel in the movies. “It’s a very fine line. We couldn’t take [those effects] too far away from the original conceptual thought and process. But technology has advanced in such an incredible way in between these movies, so you also want it to not look like the clunky old version they did with optical cameras in ’89!”

From a musical standpoint, Isham’s take at his first meeting with Parisot perfectly chimed with the director’s. “At that meeting, Dean said to me, ‘I just think we should take this seriously,’” remembers Isham. “I said to him, ‘Thank God, because that’s what I thought too!’ I wanted to score this as if I was Bill & Ted’s composer. Not the audience’s composer, but Bill & Ted’s. It’s their adventure and the music is their story. It meant I could find all these emotions within them, give them some heart. And that also turned out to be so much funnier than trying to make ‘funny’ music. It felt like it fit.”

For Parisot, from a narrative perspective, Face The Music represented three unmissable creative opportunities. First, there was the upping of the stakes. In Excellent Adventure, Bill & Ted’s mission was to not flunk their history report. In Bogus Journey, it was to win The Battle Of The Bands. “And in this one, the stakes are that all of space and time is going to be destroyed,” laughs Parisot. “We sort of skipped over all the other possible stakes.” Second was to oversee the evolution of two of the most iconic comedy creations of all time. “What’s really interesting,” Parisot observes, “is that in this movie Bill starts off more optimistic than Ted and then they kind of switch places in the middle.” And, third, there was the chance to introduce the world to Bill & Ted’s daughters, Thea & Billie.

“A lot of us [on the production] have daughters,” says Parisot. “So that father-daughter relationship was a really interesting avenue to explore. And when I told my daughter I was doing this movie she was really excited. Then she’d say, ‘Dad, it’s unlikely that they would say ‘Dude’ this much. And I’d always call her on it. I’d point out, ‘You just said to your boyfriend, “Dude, what the hell…?” You’re using the phrase! You’re just not aware of it!’” The casting of Billie & Thea was crucial, not least given the legendary chemistry of their on-screen fathers. “Back when we were casting the roles of Bill & Ted, for Excellent Adventure, we had all the best young actors of the moment [in to audition],” remembers Kroopf. “It was basically a big bake-off, and we did our due diligence. But it became impossible to not cast Keanu and Alex. And that was because every time we’d go out into the waiting room to get the next set [of actors] in, there they’d be, talking. They didn’t know each other, but there was this connection between them. Then you’d go out for lunch and there they were, having lunch. Then you’d walk to your car at the end of the day and there they were, on their motorcycles, driving off into the sunset together.

“We knew with Samara [Weaving] and Brigette [Lundy-Paine] too,” Kroopf says of casting the brilliant ‘Ready Or Not’ and ‘Atypical’ actors……. She is so funny. And Brigette, when she walked in, you just went, ‘Is that Keanu’s daughter?’ This physicality she can uncork is jaw-dropping. And then we looked at a picture of Samara and Brigette, put it next to a picture of Alex and Keanu, from Excellent Adventure, and it was just, ‘Oh my god – this is uncanny!’” 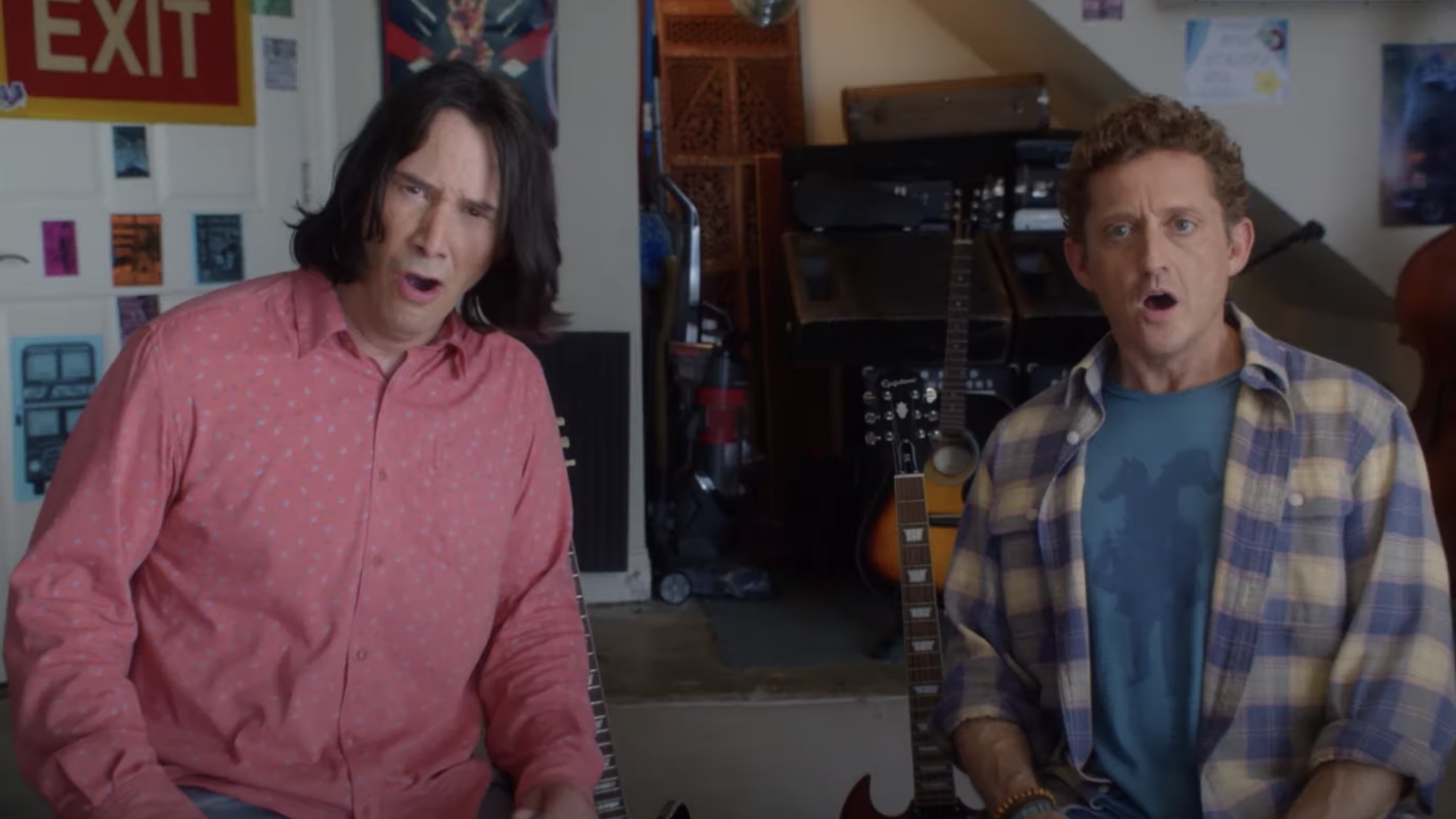 Bill & Ted have come a long way. They were born on stage and started out grounded in reality, before Matheson and Solomon skewed their movie versions into the realm of sci-fi (“I try to consciously fight it, out of a desire to break away, but maybe I have a predilection toward that because of my dad,” Matheson has said to Starlog Magazine, referring to his father, legendary science fiction author Richard Matheson). And though the concept for Excellent Adventure was a tough nut to crack – Matheson and Solomon’s initial idea had been to have Bill & Ted being accidentally responsible for everything bad that ever happened, like the sinking of the Titanic and the assassination of Abraham Lincoln – once they’d settled on the idea, the script took just four days to hand-write. And now, 29 years after their first sequel – originally titled Bill & Ted Go To Hell – they find themselves back to finish the journey.

“This is a three-part story,” says Matheson. “Excellent Adventure is the beginning, Bogus Journey is the middle. And this is the end.” Solomon agrees. “The first movie, we wrote it as kind of a lark, because the characters really made us laugh. And then as it grew… it became much more meaningful,” he says.  They’re far from alone. Bill & Ted have their famous fans – Steven Soderbergh was part of a group of creatives who read the Face The Music script, although he says, “My role was more as a cheerleader than anything” – but more than that, they have legion fans in the real world too. “I have to give a huge amount of credit for this movie actually getting made to the fans,” says Kroopf. “Every time we’ve said, ‘Hey, are you interested?’ in some way or another, the chorus has been shocking in terms of its intensity, passion and the sheer size of people it touches in some way.”

For Reeves and Winter and Matheson and Solomon, Face The Music means the end of a question that has dogged them in the years in between, whether it’s on the set of John Wick or Men In Black, or in a restaurant or a store: “Are you doing another Bill & Ted?” It also gives them the chance to say thanks in the only way they know how.