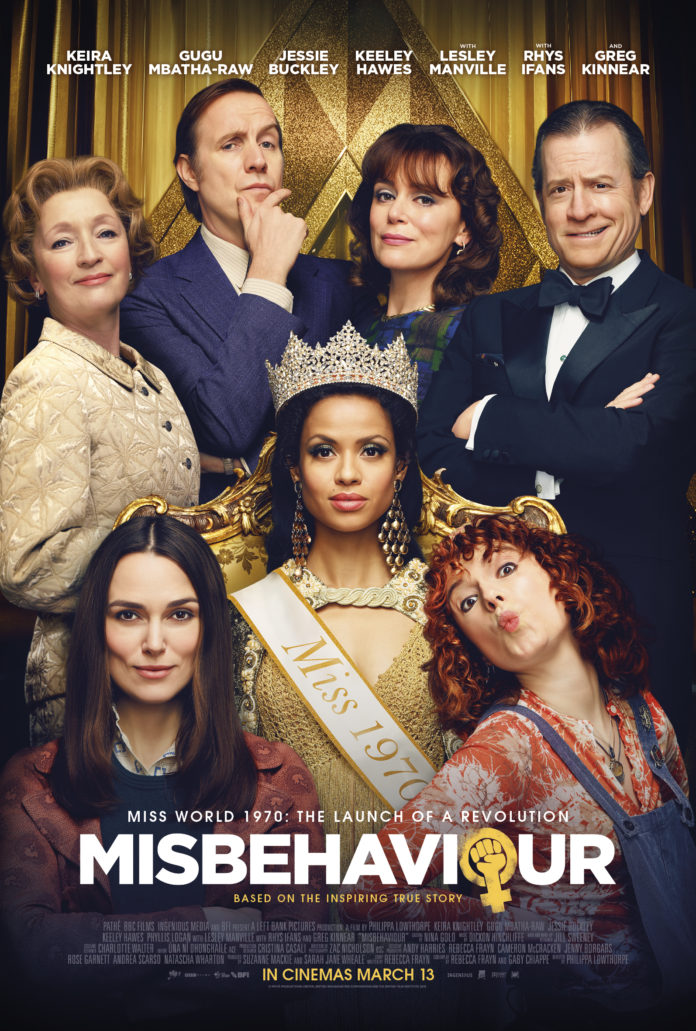 The 1970’s. Happy days where the school summer holidays lasted forever, fondue and prawn cocktail were the corner stones of any dinner party and and if you wanted to work as a presenter for the BBC you had to be a predatory sex offender ……..thankfully that last bit has mercifully ended.  It was also the rise of the feminist movement that saw women campaigning for equal rights and Misbehaviour sees Sally Alexander (Keira Knightly) being interviewed by a bunch of stuffy University lecturers  seemingly appalled a woman has dared to leave the kitchen and sit in front of them and not only that but she is a single mother too. Alexander is a bookish but strong willed independently minded woman peeking out from owlish glasses who secures herself a place at UCL where she falls in with a motley group of agit prop protestors led by Jessie Buckley who’s sole M.O. for protesting is defacing sexist bill board adverts.

It’s when the Miss World contest rolls into town that the commune of female protestors set on the idea of misbehaviour in the form of a live  protest at the televised event itself. The idea of parading women in swimsuits and evening wear now seems so quaintly outdated and here it’s made all the more laughable by a cheesily sexist compere who interviews the women who give bland answers about working for charity whereas today the answers you’d expect from the girls of TOWIE asked, ‘What are your hobbies?’ are more likely to elicit the reply, ‘Drinking, screwing and trying to balance a bag of chips whilst peeing in the gutter’.

Counterbalancing the the women’s right protestors are the contestants themselves who are an eclectic bunch. Suki Waterhouse plays Miss USA with a sense of arrogance and entitlement that the title is hers.  Clara Rosager plays the contest favourite Miss Sweden but looking at the whole Miss World circus with the same sort of disdain that British audiences do when looking at the Christmas TV listings and there’s the thrill of Miss Guyana and the breakthrough moment for Miss South Africa which is divided between two women to embrace both a black and white entrant and it’s this aspect where the contest for the first time stood up to the apartheid system. It’s one aspect of the script which very much plays second fiddle to the women’s right protest. Perhaps best of all is Rhys Ifans in typical scene stealing form as Eric Morley who was behind the whole lurid idea of Miss World. Like a greased back, sleazy wide boy at a second hand car auction Ifans corals the women through rehearsals for the show. Ifans usually morphs into the physical likeness of many of his roles and his role as Peter Cook in ‘Not Only but Also’ was extraordinary and he’s also played Dylan Thomas and Howard Marks to remarkable effect but here his physical resemblance to Morley only extends to him being male. Nonetheless he is hugely enjoyable in the role. He’s watched over by his elegantly demure wife Julia (Keeley Hawes) in an underwritten role and a more mismatched couple it would be hard to imagine. Think Jacob Rees Mogg marrying Kerry Katona and you get the idea.

Add to the sexual politics Greg Kinnear as Bob Hope, the comedian and serial adulterer, who, much like Rhys Ifans as Eric Morley, bears little resemblance to Hope and is watched over by his weary wife Dolores (Lesley Manville) begrudgingly resigned to him taking on the compere job knowing that it is like giving Gemma Collins the keys to the Krispy Kreme factory.  It’s a uniformly good cast with Ifans leading the way.

Directed by Phllippa Lowthorpe and written by Rebecca Frayn this is the latest film that supports the #TimesUp movement and juggles most of the roles well and the demonstration, when it does happen, is well staged equally showing the weakness of all parties concerned – Hope is hopelessly lost without his cue cards and Sally Alexander, pulling out an imitation handgun, in a misguided moment of madness despite her best intentions. For men of a certain mindset Misbehaviour is reminder of how women’s rights have dramatically improved and the end of the film is uplifting and guaranteed to put a smile on your face with the real life protestors as they are today.