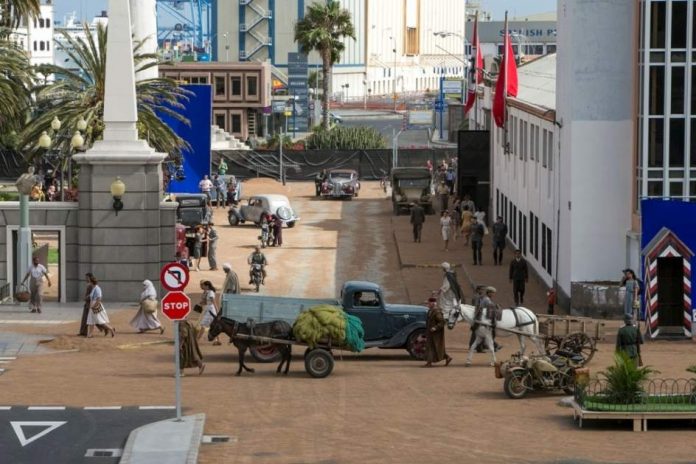 With Robert Zemeckis new film Allied starring Brad Piit now out we thought we’d take at look at where it was shot and though much of the UK  was used as a production base loads more of it was shot on location in the Canary Islands.

Zemeckis has a reputation indulging in the technical side of his films with Allied he chose to use a complex blend of location work, studio sets and digital effects for the 1940’s wartime settings. “No-one could afford to build all that we have portrayed in this movie without digital tools. We’re at a point now that you can do absolutely anything with VFX. We could recreate the cities of Europe and North Africa in the 1940s and do it without facing an impossible amount of building.”

80 different sets were built for the film and the Gillette Building in west London near SKY TV studios was a central resource for the production team but the crew also shot in Camden and Southwark. Several important in the film are set in Casablanca, which in 1942 was administered by the government of Vichy France but were filmed in both London, Gran Canaria and Fuerteventura in the Canary Islands, partly because Casablanca frankly has had better days and now lacks the romance of the wartime era although a visual effects team did go to Casablanca to laser-scan a selection of historically-suitable rooftops which were then inserted as background plate shots for certain scenes. “It was a very elegant, stylish, sophisticated city at the crossroads of the war.” says Zemeckis. It clearly isn’t these days

Because of the current tax credit support for big-budget movies and high-end TV productions London is hugely popular for filming – take drive trough London and you an’t help but stumble across film crews (we found one in Ealing borough earlier today which was all very hush-hush). The Canary Islands is becoming increasingly popular over the past few years with films like Fast & Furious 6, Clash of the Titans (remake), In the Heart of the Sea & Ridley Scott’s Gods and Kings being short there.