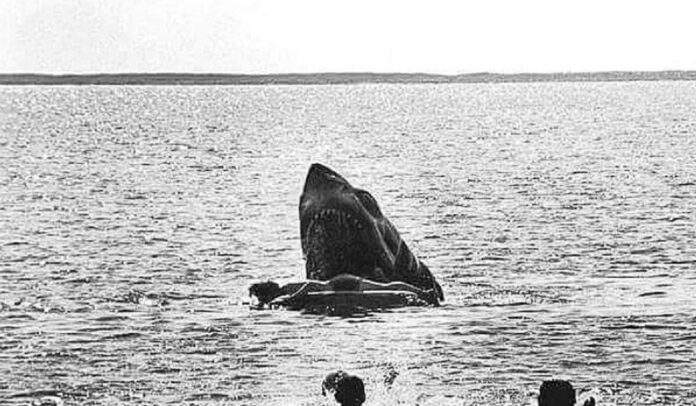 It’s been well documented what a nightmare Spielberg had shooting Jaws. Hugely over schedule and over budget but the film invented the summer blockbuster and made Spielberg a star director and is still the greatest shark film ever made.  The fact that the shark rarely worked properly and kept breaking down is well known with nearly all of the shots where it did work ending up in the film. The one that didn’t end up is the Kintner boy sequence.  It’s the scene where bathers go to the beach and the mayor encourages them to swim and the boy Kintner takes his lilo into the sea only for it to end tragically when he is attacked by the shark. The photo above is that very moment where the shark rises out of the water and bites down on the poor boy. It’s an horrific moment and it’s for that very reason that Spielberg, realising that it was probably just too much for audiences, dropped the scene from the film with only this photo remaining and is the stuff of nightmares.

Instead the scene focuses more on the simulated drowning of the boy. Jeffrey Voorhees, who played the Kintner boy, had to swim near to a machine which exploded with blood as the shark (which isn’t really seen apart from a fin), attacks him and he had to submerge himself underwater on cue.  Despite his best efforts he had to be ‘helped’ by a scuba diver dragging below the water using a spare oxygen mask to help him to stay under. This was the first time in the script that a child becomes a victim and one of the crew watching found it so distressing that he threw up on the beach.

The scene had his traumatized mother calling out for him as the swimmers run screaming from the water with actress, the late Lee Fierro, in a later scene confronting Roy Scheider’s  Police Chief Brody and slapping his face ……for the rest of her career she was forever being recognized by fans who bizarrely asked her to slap their faces too.

So would you have kept the scene in the photo in Jaws ?