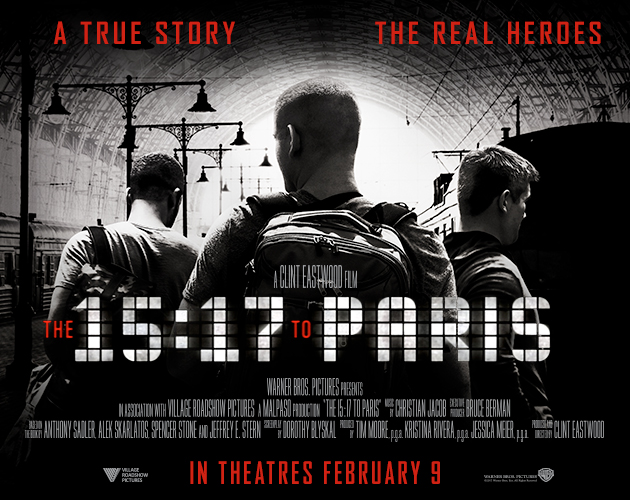 The glut of terrorist atrocities suffered by France included a lone wolf terrorist tooled up with a semi automatic rifle, hand gun, knife and 300 round of ammunition on the 15:17 to Paris. It was only the presence of three Americans (and a British Doctor) that saved the passengers being killed. It made headlines round the world though thankfully it didn’t happen on British soil as The 15:17 to Paris….is delayed would almost certainly never have been made into a film.

Starting with the terrorist, whose face is never initially shown, who boards the train before the film begins the first of its many flashbacks. Yes it’s one of those film which flits back and fore in time and here it’s to serve the back story of the three American men as they first encounter each other back in school in 2005. Spencer Stone, already a bit obsessed with the military as he wears a military fatigue T shirt along with his friend Alek Skarlatos both from single parent families and they befriend black, sassy and smart mouthed Anthony Sadler the only one with a stable family. Their friendship is forged outside the school principal’s office where they are frequently sent for misbehaviour. The film makes much of their early days with each scene seemingly there to illustrate a facet of their character which will come to the fore when ‘the incident’ begins.  So we have their fascination with guns and the military, their Christian upbringing at their church school (which is obviously played as the antithesis to Islamic fundamentalist terrorism) ,  a wrestling scene where Spencer learns some moves and a scene where a teacher tells them to be prepared for the unexpected in life – hmmm wonder what that could be leading up to?

Much of their schooldays  friendship  is endearing enough but the films structure flashes back and forth as they go through school into dead end jobs whilst flashes of the incident on the 15 17 to Paris are interspersed. It’s this structure which becomes a flaw of the film because just as the incident leaps into action the film lurches to a halt as the  film rewinds back to their school days again and especially Spencer’s  desire and commitment to training to get into the role he wants to do in the Forces. It fatally cuts the pace of the action dead.

Burt herein lies the problem with The 1517 to Paris which has been wholly built around a thankfully brief terrorist incident and the rest of the film is comprised of significant filler scenes most notably when the three are Europe which becomes a travelogue adding nothing to the story.

Certainly nothing can be taken away from the bravery of  the three especially Spencer because its he who is the first to leap into action, taking on the terrorist single handedly and suffering some gruesome injuries in the process before his two friends assist.

At 88 years old this is Clint Eastwood’s latest film as director and continues his run of films about true life stories (Sully) and his admiration for the military as seen in American Sniper and Flags of our Fathers. But once again it fits his template from two of those films even down to the end credit real life footage of the returning heroes. What is significantly different here is that he steps away from using actors in the title roles using the actual men themselves to play themselves and though none of them are actors they all acquit themselves well.

This was shot very quickly by Eastwood and there was talk of it being a possible Oscar nomination contender – the fact that reviews were embargoed until the day of release shows how hopes quickly faded. There’s no denying the bravery of these men but it does have an aura of TV movie of the week about it and that actually this would have made an even better documentary with dramatised moments rather than a feature film which here struggles to fill its brief 94 minute running time.