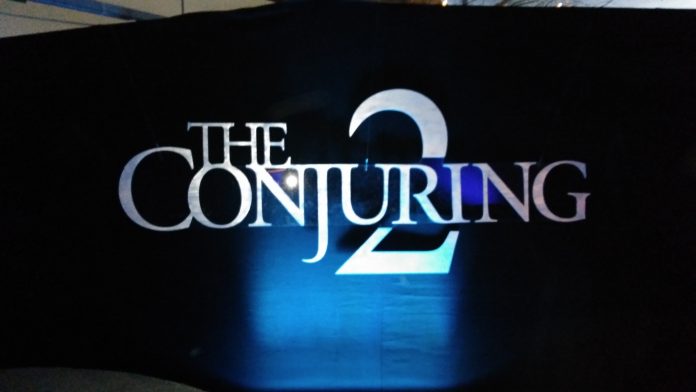 Much like the Editor returning from lunch stinking like a brewery but insisting that all he’d had was beer battered onion rings the credibility of many of the cases investigated by paranormal investigators Ed & Lorraine Warren were often thrown into doubt. Their most famous case was Amityville, a case which has been open to much speculation and which is the opening scene of ‘The Conjuring 2’ as the husband and wife team investigate how the gruesome murders at the house prompted the possession. It’s this scene which ironically features director James Wan as their camera assistant. Meanwhile thousands of miles away in Old Blighty or North London to be exact a young single mother, Peggy Hodgson (Frances O’ Connor) with her four children live in a semi detached house that her ex husband had bought replete with all its furniture after an elderly man, who we later know as Old Bill (Bob Adrian), had died and whose spirit is keen to see that no one else should live there.

After so many Hollywood horrors set in the US there’s something chilling for UK audiences to see something closer to home in what was a famous real life case filmed in the UK (or at least the exteriors were) and director James Wan of Malaysian/Chinese descent who lived in Australia before moving to the US, has captured a 70’s UK well introducing it with The Clash’s anthem,  London Calling, one of several songs whose lyrics are pertinent to the film, and further enhanced with sets dressed  with David Soul & Starsky & Hutch posters, bakelite phones, policewomen in skirts and even The Goodies playing on the TV.

With what seems to be the obligatory dabbling with a Ouiji board by the children the presence of Old Bill starts to make himself known (they should have played ludo!). At the same time the Warrens are in the US defending themselves on TV and with Lorraine continuing to have premonitions of her husband’s horrific demise she urges them both to retire. It’s a theme of loss mirrored in the Hodgeson home where one of the daughter’s , Janet Hodgson (Madison Wolfe), starts channeling old Bills demonic voice and her very soul is in danger of being lost.  With the UK ghostbusters investigation becoming a nationwide TV phenomena the story gets back to the Warrens and they decide to help. Unlike the first film this sequel is open to the doubters and freely suggest that this could be a hoax with rational explanations voiced by one character whose specific purpose seems to be to debunk what we see but ultimately the film has to take the Warrens side and it gives James Wan free rein to indulge his expertise at scaring the audience senseless which again he carries off with aplomb. There are well orchestrated scenes and moments that make you shiver and arguably this is better than the original. There is a palpable sense of dread that builds throughout and Wan also uses the soundtrack to add to the unease with a recurring heartbeat motif that occurs throughout which at times is something of a distraction as well as being on occasions, a bit of a bluff.

It helps that the cast play their roles well especially the children who convince in finding comfort in the most childlike of things whether it be leaving a light on, or holding onto a toy or craving a plate of biscuits.

James Wan has little to prove now in the horror genre having reinvigorated it with franchises for SAW, Insidious and now the Conjuring and having handled action blockbusters so well with last year’s ‘F7’  the break seems to have recharged his batteries and he’s been unable to resist returning to his love of horror. Fans of spooky scenes rather than blood, guts and gore will love this and it’s worth staying for the credits too for real life photos of the family and a recording of Old Bill himself.