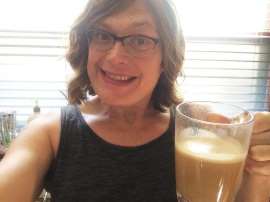 The Wachowski Brothers, Larry & Andy, famous for their Matrix films are notoriously private even when Larry came out as being transgender and is now known as Lana.

A further twist to the saga has been instigated by the arrival of a Daily Mail journo arrived on Andy’s doorstep to be questioned about transgender issues. Having been coerced into this Andy has now made the formal announcement that ‘Andy’ is his former name having now made the transition to transgender and is now known as Lilly.

In her statement she said, “Sex change shocker – Wachowski brothers now sisters!!!” before adding,’We continue to be demonised and vilified in the media where attack ads portray us as potential predators to keep us from even using the goddamn bathroom.

“So yeah, I’m transgender. And yeah, I’ve transitioned,” she said, adding that she is out to her wife, family and friends.’

In typical style our Editor has said that Lily does look a little too much like Greg Wallace from Masterchef and frankly for Lily, ‘it doesn’t get any tougher than this!’