We were kindly asked along to see a bunch of footage from the new Transformers film which was introduced by Michael Bay himself. It seems that he’s done a lot of editing from what looks a super hi tech digital edit suite at his home in Miami which then gets sent a across to five different  Editors. The most revealing thing from Bay was not just confirming that they had a writers room for the film but that they had so many ideas they have enough to make another 14 films!!!!!! He was also keen to emphasise that this is one of the first films to be shot in IMAX 3D with high definition details of all the mayhem.

Then the footage was played to us which though not revealing any spoilers to us was a taster of what we’ d see in the film. This included a scene of some kids scrabbling over a derelict building onto a big broken robot which come back to life and taken to safety by a young girl as they chased by robots not dissimilar to those seen in the original Robocop boardroom scene.  Mark Wahlberg rops up in this scene to help them escape.

There were also some big battle scenes set during Arthurian times.

There were also some intriguing scenes with Anthony Hopkins himself who’s not the sort of actor you readily associate with doing a film like this. He plays some sort of collector who lives in an English castle with a humanoid robot butler and another transformer robot which features outside the castle and transforms into a tank which fires at Mark Wahlberg as he approaches to visit Hopkins. Once inside the castle Hopkins expands on the transformer mythology and that they’ve been on Earth for far longer than we knew. Also present is the young girl we saw earlier who seems to be some sort of sidekick . Also in the scene was another actress, we think is  Laura Haddock wearing  what Wahlberg describes as a ‘black stripper dress’ and there is some banter between them.

All the scenes were incomplete and none featured regulars Stanley Tucci or Niccole Peltz from the last film.

There was a load of other footage of robot fighting too and it seems like this will be a long film and could be Bay’s swansong from the franchise as each film h says will be his last one. We’ll see……. 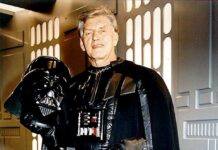