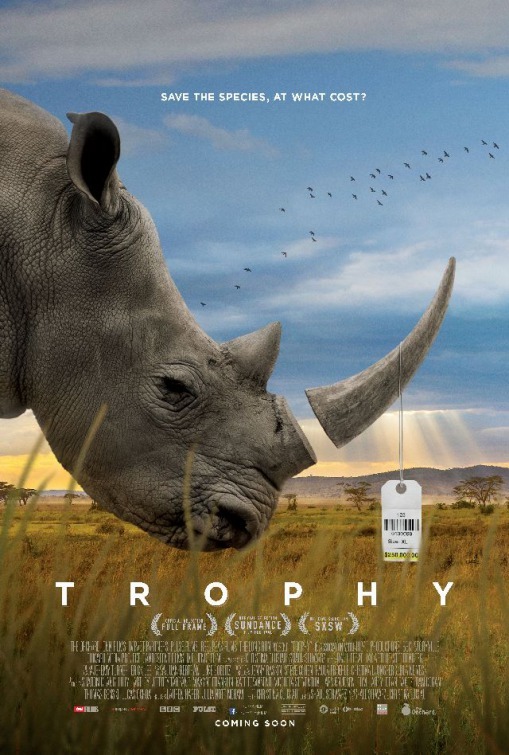 For many animal welfare is an emotive issue, though not as emotive as our editor when it’s his turn to buy a round of drinks…… but we digress. The documentary ‘Trophy’ covers the issue of animal conservation and balances it with big game hunting, one of which would, on the surface, appear to be wholly detrimental to the other. ‘Trophy’ presents a different angle because here it posits the idea that the cost of going on big game hunting expeditions actually pays to support animal breeding programmes. Albeit that once safely reared the animals sole purpose is to be shot by testosterone fuelled, dick swinging numb nut Americans with more money than sense. These wannabe big game hunters pay truly astronomical sums of money to shoot wild animals in their natural habitat with elephants and lions being the most expensive to shoot costing hundreds of thousands of dollars. The film makers follows several hunters, many of which regard it as an almost religious experience, with one, having shot a lion, breaking down in tears, whether it be from guilt, jubilation or relief is left for you to decide.  But it doesn’t stop the film showing some shocking and for some, upsetting footage especially where a purpose bred alligator, who has been dragged out of a pond the size of paddling pool, has a ‘hunter’ stand over it and shoot it through the head at point blank range followed by a triumphant punch in the air and a yell of, ‘MotherF*******!’  It’s hardly a surprise that one member of the audience we saw this with shouted, ‘Coward!’ at the screen.

The flip side to all this is the wealthy rhino breeder who has almost single handedly kept the South African rhino population stable financing it all from his own ever dwindling pocket. His angle is very different as he campaigns heavily for rhino horn to be legalised as it almost immediately ends over night the illegal market. It’s an entirely understandable point of view as the poachers kill the entire animal just for the horn whereas the breeder has the animal anaesthetized before safely removing the horn and the animals lives on to fight another day. It does mean though that the farmer has tonnes and tonnes of rhino horn that he legally cannot sell but if he could it would fund his rhino conservation programme. He lobbies South African government to back his cause and even comes to London to debate with an animal conservation group who seem wilfully short sighted in their opposition to what he does.

Though a little overlong this is a fascinating documentary which offers no easy answers and is almost guaranteed to divide audiences and provoke arguments long after it has finished.