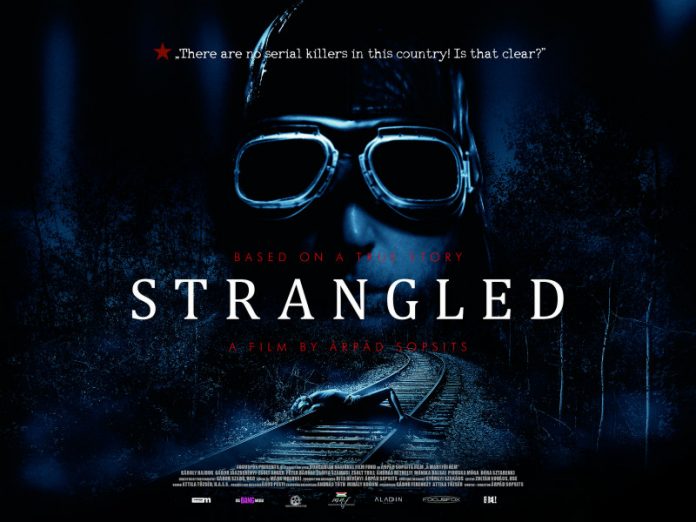 Several films this year have titles which are, at best, obscure and, at worst, a complete misnomer so whilst ‘Murder on the Orient Express’ needs no explaining, thankfully ‘The Big Sick’ wasn’t a 90minute film about a pool of vomit (and frankly anyone who cares to follow our Editor round his Soho drinking dens on a Friday can see that for free) but anyone going to see ‘Baby Driver’ and expecting to see a joy riding toddler would have been disappointed.

‘Strangled’, on the other hand, does what it says on the tin. Based on real life events in 1960’s Hungary it covers a series of shockingly brutal murders and necrophiliac rape of young women in a small town. It starts with what should be the end as a man is convicted of the rape and murder of a woman from the local factory. It’s a murder he readily confesses to and is swiftly banged up and, in one harrowing sequence, brutalised by the inmates in a shower. The police prosecutors are only too eager to have a conviction to show the population their efficiency. Problem is the man is entirely innocent and the murders continue and it’s the introduction of a new officer to the case who determines to trace who the killer is. With more murders victims being found it soon transpires that the prosecutors have much to lose if the man they convicted with undue haste is found to be innocent.

Much like the recent ‘Kills on Wheels’ this is another compelling Hungarian film which has some alarmingly sordid and gruesome murders which make very uncomfortable viewing and at times are arguably too graphic as the film goes on with the necrophile drawing increasing pleasure from the desecration of the bodies which are disposed of in the most callous throwaway fashion as though they are just rubbish. It’s perhaps just as well that we never really have any sense of who these women, and in one case a girl, actually are as the sequences would become perhaps too upsetting and must have been far from comfortable for the actors to have filmed.

It’s a compelling story and the miscarriage of justice is as frustrating to watch as an innocent man suffers due to the ineptitude of the investigation. In fact a re-enactment of the murder at the very start is shocking more for the sheer insensitivity with which it’s done with all and sundry spectating including relations of the murder victim.

Much like the way the Yorkshire Ripper was found the murderer whose identity we are privy to early on, is discovered by what would appear to be the most elementary method and the ending of the film which cross cuts between the murderer, the police officer who  uncovers him and the innocent man ends the film is both brilliant yet depressing.