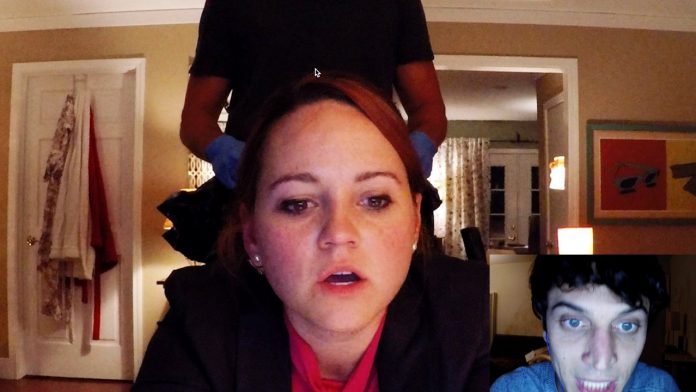 Perhaps the most frightening thing we found on the internet was the Editor’s browser history and its selection of specialist interest websites which goes some way to explaining why his laptop looks like a cheese toastie. (‘You’re Fired!‘ – Ed). Unfriended Dark Web is similar in many ways to 2016’s Friend Request being based on social media though here it’s based on six friends in a group chat using skype. For those not in the know the Dark Web is an untraceable part of the internet originally  developed and intended for use by military and government but as might be expected has come to light  for being used for even darker purposes by individuals using it for drug deals, arms sales, child pornographers, extortion and all manner of other illegal and nigh on impossible to trace uses and here it’s being used by a murky organisation called The Circle who use it to trade clips of varying degrees of nastiness carried out on abducted women. Mercifully the clips only hint at what’s about to happen to these women and are cut short before they are revealed in all their unsavoury tawdriness and vaguely misogynistic way.

These clips are only found by accident when Matias (Colin Woodall) decides to appropriate a lap top from a cyber cafe’s lost & found as it’s better than his own laptop  and uses it to skype a mute girlfriend Amaya (Stephenie Nogueras) who’s on the verge of breaking up with him. At the same time he simultaneously holds  a 5 way skype chat with friends as well as carrying out a facebook chat, google research,  passwords tests and downloads.

Like the forthcoming film ‘Searching’, Unfriended Dark Web is solely presented on screen as a PC’s screen with pop up’s and various other screens being minimized, maximised and text conversations and other connections simultaneously  appearing and it’s difficult to to keep up with the rapidity of all this as you’re continually scanning the screen for various things happening that it takes away a lot of the tension that should be generated if presented in a more formal manner. It’s here that Unfriended Dark Web falls down because whilst a younger generation  more used to this level of PC multi-skilling to others it’s confusing and takes some while to get used to.

So whilst Matias realises that Amaya is in danger from ‘the circle’ the group of friends soon understand that they all are until Caron (Rob Welsh) , the owner of the lap top gets his lap top back and all of the friends words, actions and contacts on their own PC’s being covertly tracked by the circle with far superior PC hacking skills. One by one each of the friends finds themselves in mortal danger regardless of how they try to save themselves and the most ingenious section of the film is the use of soundbites that ends up with one of the group being killed in the most ingenious manner.

Unfortunately most of the group are not that likeable especially AJ (Connor Del Rio) and the first 25 minutes of the film where we get to know the friends playing a daft game they come across as mildly irritating.

Computers and the internet and their depiction on screen  have ben around for some years now and Unfriended Dark Web is another film that struggles to make it cinematic and at a brief 90 minutes it’s still too long and by the end is a bit too clever for its own good.