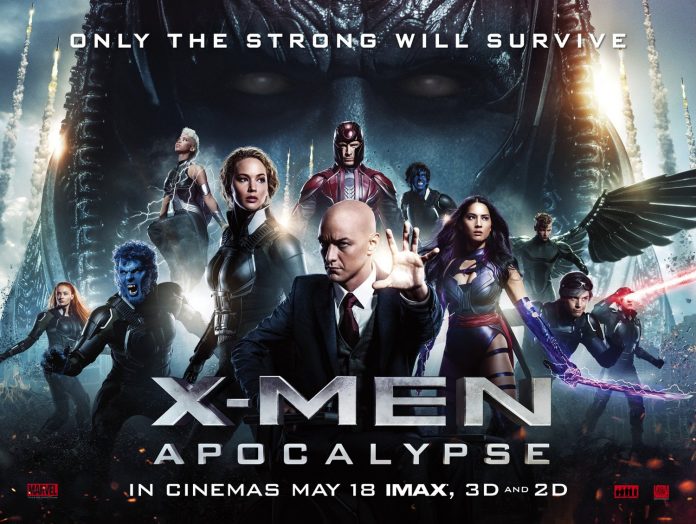 The release of any new X Men film always gives us the chance to plunder X related puns. So is the new film X-cellent or X-crement? ( ‘Stop it’ – Ed)

Director Bryan Singer returns once again to helm the latest film and opens with an X-quisite (‘That’s enough’ – Ed) Egyptian set piece in 3600BC where the world’s first mutant, Apocalypse, (Oscar Isaac) is made X-tinct (‘You’re fired’ – Ed)  and the scene segues into a wormhole title sequence which plunges the audience headlong through the ages up to the 1980’s where the film is set.

Picking up 10 years after the last film the X-Men have gone their own way with even Magneto now working as a manual worker in a Polish factory to support his wife and daughter, Professor X has his school for freaky…um….gifted children and whilst some of the mutants including Beast and, a now unnecessarily recast, Jean Grey work there whilst others, notably Mystique are keeping a low profile since the 1973 incident from the previous film bought their existence to the world’s attention.

It’s not until a bunch of what look like Middle East fanatics awaken Apocalypse from his dormant state, where he’s been lying under a lump of pyramid, that the plot kicks in. With CIA Op Moira Mactaggert (Rose Byrne) aware of the old mutant she warns Professor X and ultimately he and Apocalypse psychically connect.  It’s a mutant skill that Apocalypse wants for himself and having found 4 new horsemen which includes Magneto he carries out his plan to acquire other mutants skills and level the Earth and start afresh with him as the big boss.

At almost 2 and a half hours this is the longest of the films in the franchise and much like the Avengers movies it’s got  a job on its hands balancing all the players and for once it’s not a film that belongs to any one mutant. With the last film being very much Mystique and Wolverine’s this is wholly led by Oscar Isaac’s seemingly unstoppable Apocalypse. In fact anyone expecting to see Wolverine to the front and fore may well be disappointed as when he does appear it’s very much as a cameo  and brings the franchise full circle back to the first film. In fact his appearance here seems to have been influenced by the success of ‘Deadpool’ because when he does leap into action his talons do, for once, cause visible injuries and blood spray. The films nod to ‘Deadpool’  includes the language too where Magneto gets to drop the films sole F-bomb with a somewhat gratuitous line.

The cast here very much play this as a team effort with no one character taking over at the expense of any other and is in keeping with the film’s ‘family’ theme and the mutants working together.  Written once again by Simon Kinberg this has plenty of back references and back story and neatly ties in threads from the other films too. There are some good gags too with James McAvoy getting plenty of funny lines about his interest in Rose Byrne’s  Moira Mactaggert and there’s even a sly dig at the third (and weakest) film in the franchise.

The previous two films have been period pieces and have been all the better for it and though this isn’t quite so obvious the style of clothes clearly place it in that era. Unfortunately what made the previous two films so good was playing with real moments in history and this being the Reagan era could have had fun with that particular chapter in history but this is largely ignored. The effects are impressive and suitably apocalyptic and inevitably there is the Stan Lee cameo where even Mrs Lee is now getting in on the act and yes there is the end credit sequence which suggests that the Essex Corporation will play a significant role in the next film.

There are good moments but the film is in danger of repeating past glories – Quicksilver racing round saving pupils from an explosions is fun but we’ve seen it before and the wholesale digital destruction is good but again we’ve seen much of this in previous films.

Much has been made about the expectation for this installment not being as high as for previous films but for both fan boys  and general audiences there is much to like but the law of diminishing returns is obvious.