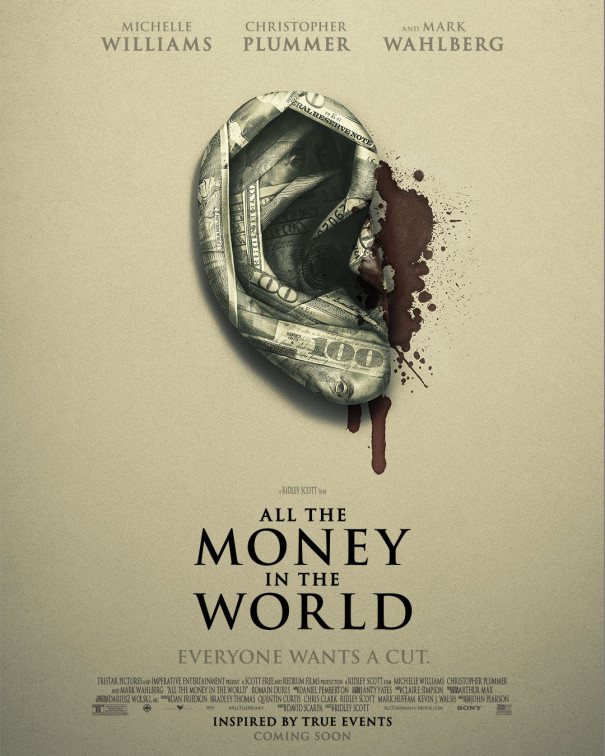 ‘Money is the root of all Evil’, so goes the oft misquoted Biblical verse whereas the actually saying is ‘the love of money if the root of all evil’ and no one loved it more than John Paul Getty who by the early seventies was the richest man the world had ever seen having amassed a fortune from oil. His wealth knew no bounds yet he found himself living alone in a huge house alienated from his son and grandson. Seeing the Getty name as all powerful he determined to start a dynasty and his estranged son John Paul Getty II (Andrew Starchan)  is summoned with his wife Gail Harris (Michelle Williams) and their children including John Paul Getty III (there didn’t seem to be much imagination when it came to naming children) to Rome where his Getty Snr greets them all.

It’s this first meeting which gives an insight into the man as he explains to his grandchildren about the price of a rare artifact he haggled over and is now worth a small fortune. Here is man who knows the price of everything but the value of nothing and it’s a brilliant insight as to how he will deal with the kidnapping of the seventeen year old Getty III (Charlie Plummer – surprisingly no relation!) some years later by a motley rag tag of low life Italian criminals hoping to skim $17m from Grandad’s fortune. What the kidnappers are not aware of is that Getty Snr has cut ties with his own son, a shambling drink addled wreck of a man (sounds like our Editor! – ‘You’re fired!’ – Ed) now addicted to heroin and divorced from the boy’s mother.

Inspired by a true story what’s as shocking about this as much as anything else is the sheer ineptitude of the Italian police who, rather than throwing resources at such a high profile case which had the worlds media and  paparazzi swarming round the family like Harvey Weinstein round a casting couch,

Like any mother Gail is devastated, out of her mind with worry wanting her son back and asking for Getty Snr to pay the ransom. What follows would be funny if it were not true. The richest man in the world and the first known billionaire refuses point blank to pay anything seeing the incident as a business opportunity to get the grandchildren into his care. It’s something to be negotiated for which he has secured a fearsome reputation with his business dealings.  It almost too incredible and he assigns Fletcher Chase (Mark Wahlberg) one of his senior business men and security advisor to get his grandson back without incurring any expense to himself.

If there’s a weakness with Ridley Scott’s film it’s the apparent lack of any real investigation. The Italian police seem wholly disinterested and Fletcher Chase’s own role in securing the return of the grandson don’t seem particularly effective but perhaps that the point becuase ultimately this is about the all consuming greed of Getty and his desire to acquire more and more money regardless at what human cost. And there is a cost because with the grandson being passed on to an even more desperate gang of kidnappers who, after months of inactivity, ramp up the stakes and start removing the grandson from parts of his anatomy and to that end there is a sequence in this that’s even more queasy than that in Reservoir Dogs where even Tarantino could not bring his camera to linger on what Michael Madsen was doing to Marvin the cop.

If ever there was a film that showed what does a man gain if he has the world but loses his soul then this is it and Christopher Plummer as the avaricious business man is utterly convincing in a role which is widely known was played originally by Kevin Spacey until his spectacular fall from grace last year only to find his already filmed scenes removed without any trace from the film. It can’t have been an easy undertaking as the scenes are far more significant and substantial than might be originally thought.

Plummer’s portrayal of Getty is of a man obsessed with money to the detriment of all others, far more interested in a ticker tape than constantly spews out his companies share price and the cost of a barrel of oil. David Scarpa’s script (only his third in 16 years) has several insightful moments and really gets under skin of why Getty trusted no one and found solace in high culture paying millions for works of art but pleading poverty when asked to pay the ransom.  His obsession with seeing everything as a deal to be made, nothing could be spent unless it had a tax incentive which he bewilderingly even broached when it came to the ransom and just how he came to maintain such astonishing wealth is enough to have all those high profile tax evaders frothing at the mouth that they had never thought of that.

It’s a credit to Ridley Scott that these reshoots, shot only a matter of weeks before the film’s release  are undetectable and arguably Plummer should always have played the role as he looks the age of the billionaire rather than hidden under layers of prosthetics as Spacey was. Quite how Spacey’s portrayal differed is anyone’s guess and perhaps will never be known unless those excised scenes pop up on dvd / blu ray later this year.

After a less than stellar year with the disappointing Alien Covenant not performing as well as hoped for this should bolster his reputation as this has his many of his flourishes opening  with a scene in the early 70’s shot in black and white that segues into sepia and eventually colour and the film ending with Getty in a suitably dark and dim house lit only by hellish fires that hint at the eternal damnation that is surely waiting for him. Plummer is superb and Spacey must be kicking himself.