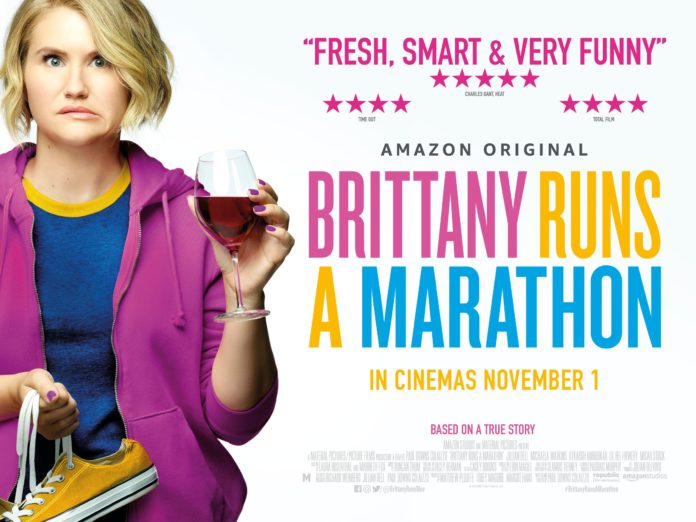 Coming from the catalogue, ‘Does what it says on the tin’, Brittany Runs a Marathon does exactly that.  Starring Jillian Bell as the title character Brittany she’s s a party loving girl only too fond of a drink and a poor diet and its only when she goes to her Doctor that he prescribes a reality check namely, ‘Get Healthy’. Now we’d be the first to admit that gyms are overpriced and seemingly populated by health Nazis, barking ‘Work that body!’ Really? Why don’t you work on your personality? Is usually our reply as we’re frog marched out. Unable to afford gym  membership Brittany is persuaded to start jogging  by her marathon running neighbor and starts bit by bit to run , one street block at a time.

Written by award-winning playwright Paul Downs Colaizzo he makes his directorial debut with Brittany Runs a Marathon. With amusing support from would be love interests and her flat mate Gretchen (Alice Lee) a self absorbed social media obsessed party girl incapable of doing anything but humble bragging.  Gretchen is this frenemy flatmate giving Brittany acerbic put downs that are a cover for her own self loathing and insecurity and it all comes to a head in a brilliant bathroom scene. It’s enough to spur Brittany on to new heights and sets herself the target of running the New York marathon. Jillian Bell is best known for her light comedy appearances in Office Christmas Party and 22 Jump Street and its great to see her get a lead role in what is a life affirming and inspiring film in an age when celebrity salad dodgers Gemma Collins and Alison Hammond are given the oxygen of publicity with their TV appearances. We do obviously have a degree of sympathy with both Z-listers after hearing that each of them have been diagnosed with flesh eating diseases and consequently have each only been given 287 years to live.

Brittany runs a marathon is based on a true story as shown in the end credits and Bell, in true method actor style a la DeNiro in Raging Bull, lost 40 pounds during the movie. Fat is a feminist issue but as this is a bit of a message movie in part but one that’s as relevant to men as it is to women wanting to get healthy. Ostensibly a women’s movie this has plenty for men to enjoy too in what is a feel good film.  Rumours that the British remake starring Gemma Collins will be in re-titled Brittany eats a marathon remain unconfirmed.