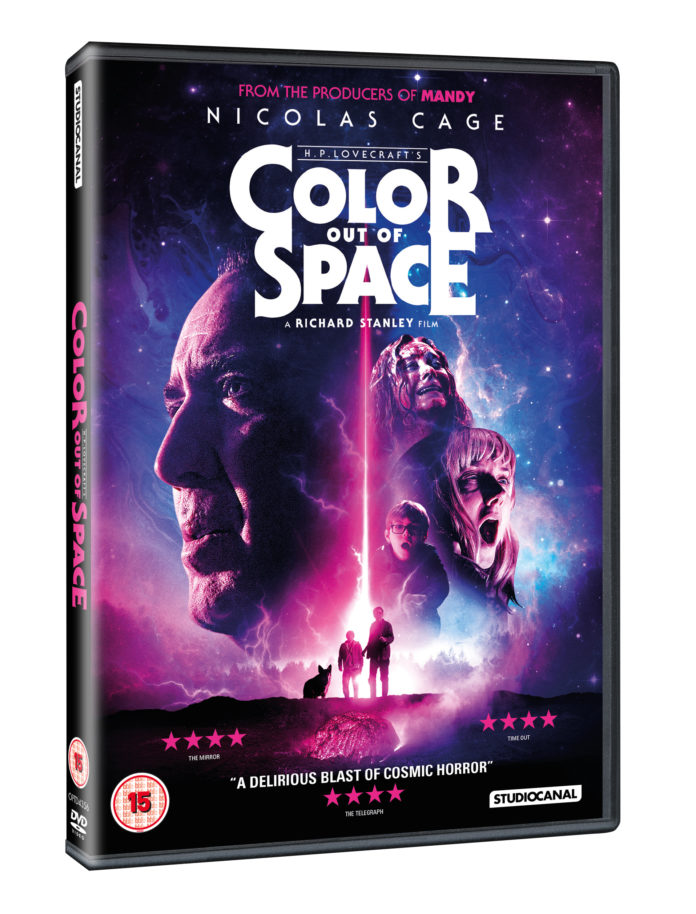 Much was made about Terrence Malick’s absence from film making for twenty years after 1978’s ‘Days of Heaven’ returning in 1998 with the star laden ‘The Thin Red Line’. But for director Richard Stanley his absence from feature film directing was even longer at 23 years. Admittedly he had directed a few documentary’s and shorts but Colour out of Space was a return to feature films after the utterly catastrophic production problems he had making ‘The Island of Dr Moreau’ with Val Kilmer and Marlon Brando which ended with Stanley getting fired but seeing him return incognito to the set over the following weeks in heavy prosthetic make up. Thankfully Colour out of Space has been a far happier experience for him co-writing the script based on the H. P . Lovecraft  novel. But getting it made was not without its initial problems with an attempt to raise finance in 2011 but failing and Stanley even pitching it to investors at the 2013 Fantasia Film Festival without success it was only in 2015 that the project got moving with Nicholas Cage expressing interest.

Cage appears as husband to Joely Richardson who in turn are parents to Madeleine Arthur, Brenen Mayer and Julian Hilliard as their children. They are the Gardner family whose lives are pitched into a technicolour hallucinogenic nightmare after a meteorite lands in their front yard.  Cage as Dad Gardner is uncharacteristically mild mannered and he has moved the family out of the city to start a new life on a farm living off gird and raising alpacas (amongst the horror it’s one of the films consistently funny elements) in rural tranquility which is shattered when the meteorite hits unleashing an extra terrestrial pathogen that slowly begins to wreak havoc. Mutant technicolour flora starts sprouting and animals grow deformities and it’s not long before the family come to realize that their minds and bodies are falling prey to the infection and they must escape from the farm which begins to be engulfed by a magenta tinted cloud.

The film has Cage on his usual manic form and Stanley handles the material well with impressive moments with nods to John Carpenter’s ‘The Thing’. Unfortunately the Colour out of Space DVD is something of a vanilla disc with no bonus features at all and its crying out for a behind the scenes feature. And lets be fair, a commentary by Stanley, after a 23 year absence, is a missed opportunity.

Read a full review of the film HERE

Here’s the Colour out of Space dvd trailer…….