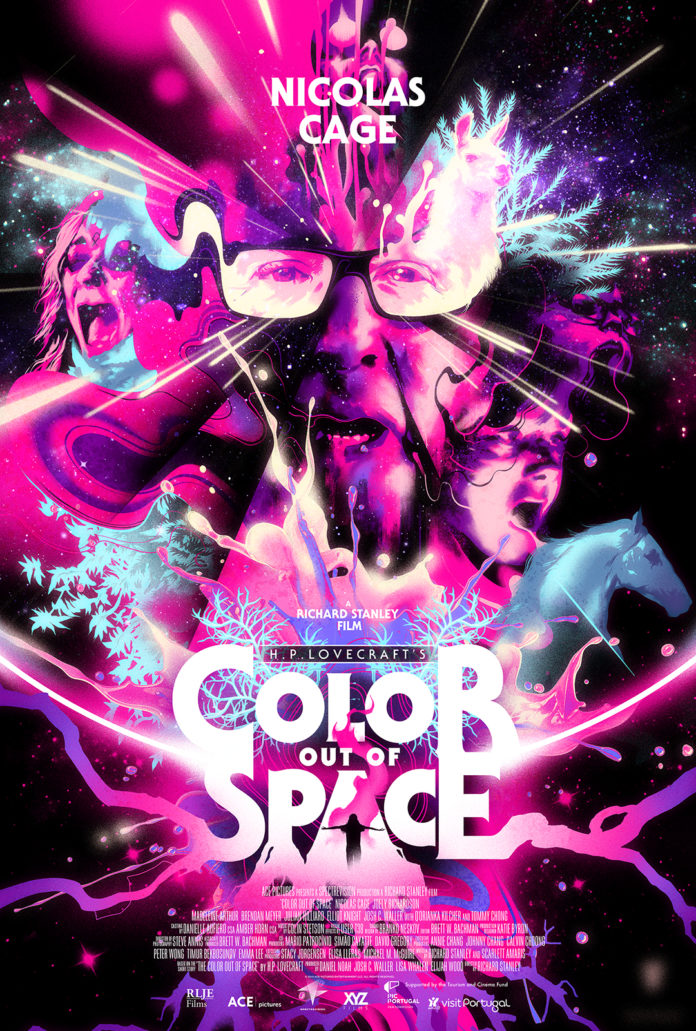 When you’re last film starred an actor with an ego that didn’t match his talent  and co-starred an acting legend who disrupted the shoot by deciding to appear with his face painted white and an upturned ice bucket on his head it’s hardly a surprise that you take  a break from directing. That’s exactly what happened with Richard Stanley’s legendarily chaotic shoot for The Island of Dr Moreau that ended up with him being fired from the production but returning to the set incognito in heavy prosthetic monster make up. 24 years later he returns to direct, Colour Out Of Space, and yet having worked with bonkers Brando on Dr Moreau he’s now cast Nicolas Cage, the sort of actor that must have producer’s faces striking the same look as Prince William’s when Uncle Andrew offers to babysit. 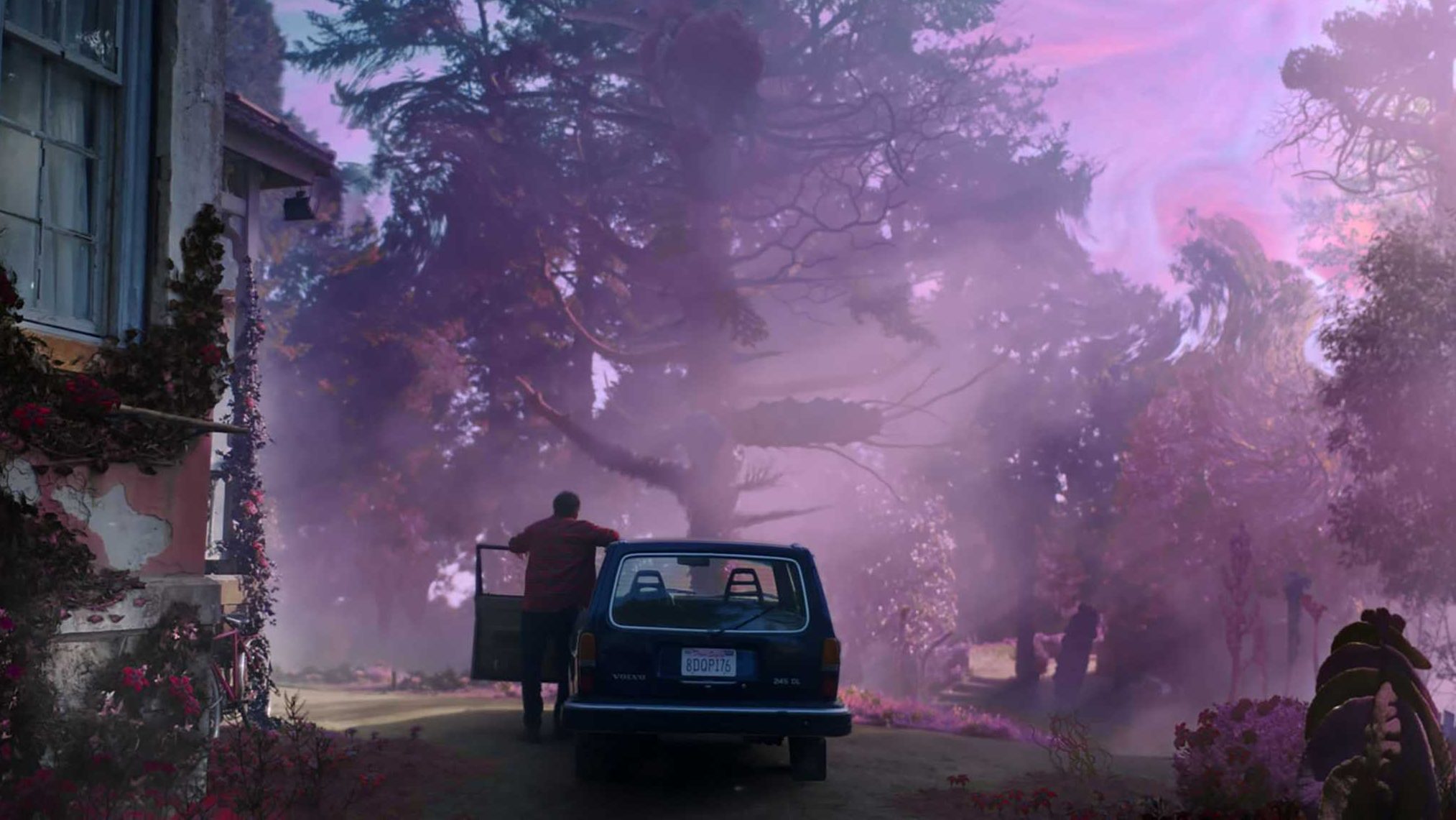 Based on a short story by H.P. Lovecraft, Colour out of Space is co-written by Stanley and  features the Gardner family having relocated from the hustle and bustle of city life to what they hope will be a  country idyll. With their children Lavinia (Madeleine Arthur) , the sort of stroppy teenager you see at music festivals who bores you with stories about finding her inner self when she’s been travelling whereas actually she never been anywhere that doesn’t have a menu without egg, beans and chips, She bumps into Ward (Elliott Knight) a hydrologist carrying out a survey on the lakes and rivers in the area where Lavinia, her stoner older brother and cute little brother  live with their parents. But then one night a meteorite hits the ground nearby with an eerie purple glow permeates the atmosphere and that is the colour out of space that permeates the film as the story progresses. Its caught the attention of the small town police who attend and carry out exhaustive tests on the meteorite, that is to say the cop pokes it with a stick. 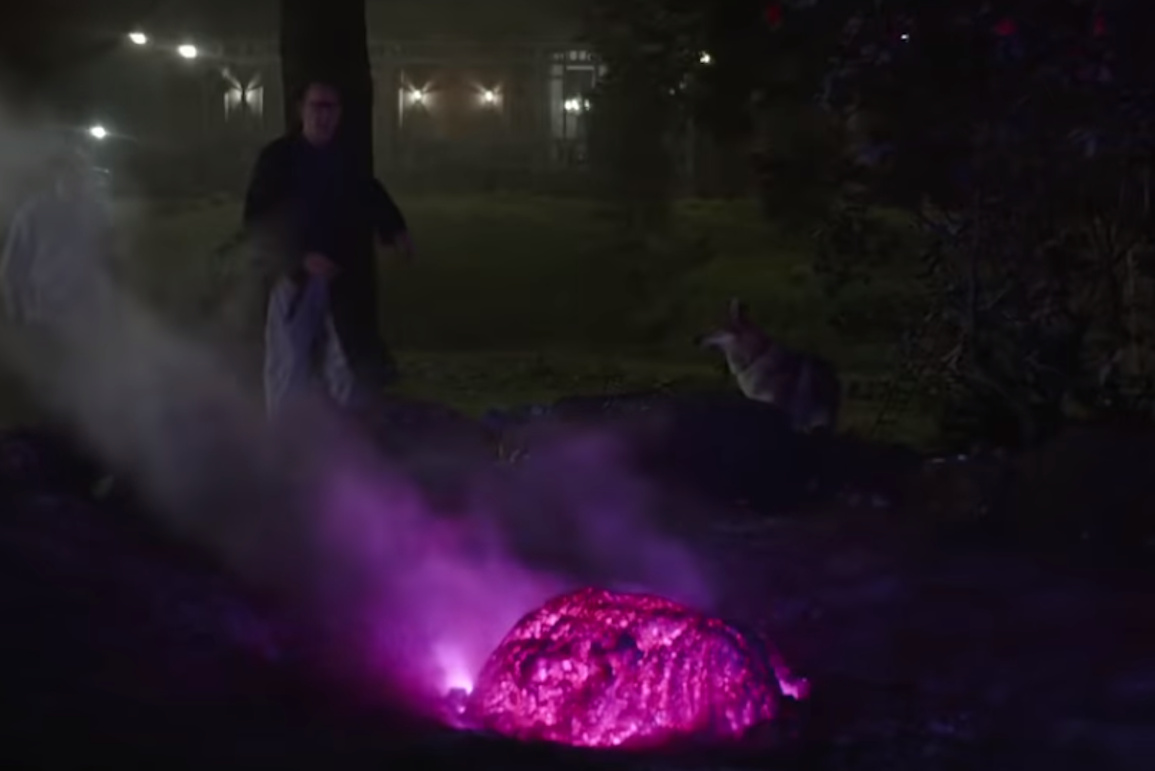 For the first two acts this is all relatively low key with the ambient colour out of space playing an ever more influential role in the film as strange things begin to occur usually with an odd low key garbled noise playing in the background like an internet dial up service is being used by whatever has landed and rendering anything electrical useless. It’s the start of all manner of strangeness that starts to affect the family’s behaviour as things begin to mutate around them. Now for the most of the time Cage is uncharacteristically reserved and gets  loads of laughs with his obsessive concern for his alpacas, seeing  them as his future in farming yet is about as suited to rearing them as Fred and Rose West to children’s  social work.

Its only when one of the kids says, ‘Dad’s getting weird’ confirming that we can sit back and watch Cage plummet into the usual lunatic on screen behaviour he can’t resist pulling the sort of faces that look like he’s gone without any fibre in his diet for months and is unable to take a dump without using a handheld drill to assist him. ‘I’ve had it with your drama!’ he screams probably as much at director Stanley as to his fellow cast members and off we go on another one of Cage’s crazy capers. Whatever arrived with the meteorite has a devastating effect on the family especially Cage’s wife Theresa who is recovering from a masectomy played by Joely Richardson adding this to a string of  roles you wouldn’t expect (her crazy accented landlady in the Hatton Garden Job being one). As a sci-fi horror Colour out of Space tips a wink to John Carpenter’s magnificent ‘The Thing’ with its body horror and Stanley’s low key drama builds to the trippiest of crescendo’s that is rare in horror. Richard Stanley is ideally suited for Lovecraft adaptations and is on the same wavelength bathing his film in an unearthly glow, an unnerving soundscape and some alarming body horror. Cage and Stanley are a dream pairing and it’s been long overdue for Stanley to return to feature films with his idiosyncratic style and Cage is his ideal muse and hopefully it won’t be another 20 years before he makes another film.  Colour out of Space is likely to be more of a cult than mainstream hit but is well worth catching on the big screen.

Here’s the Colour out of Space trailer…….