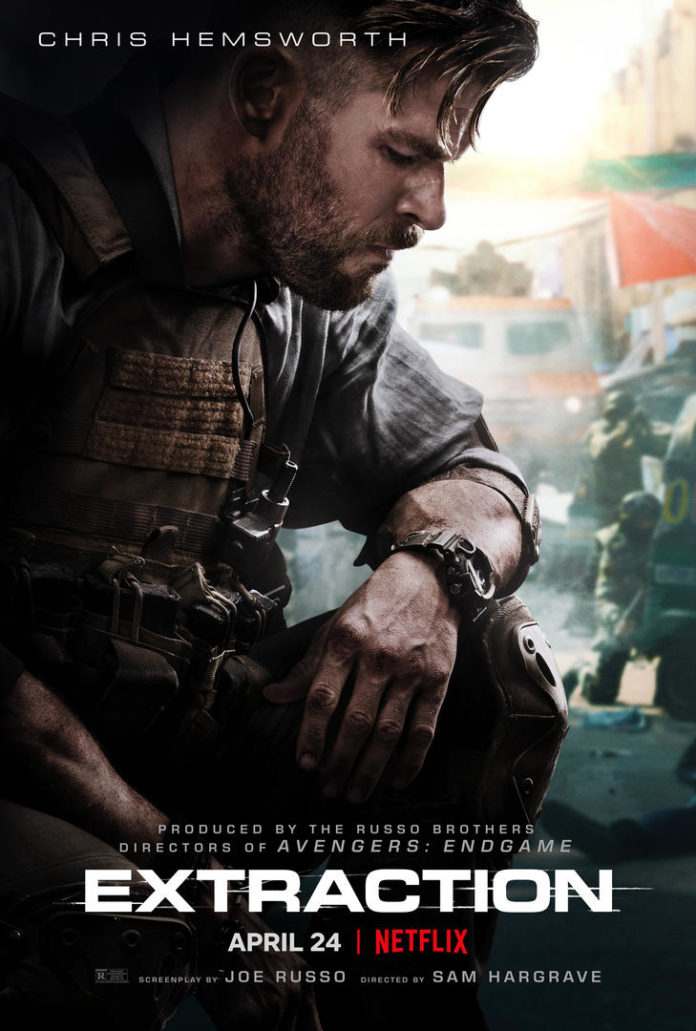 The last time we saw Chris Hemwsworth was as a bloated Thor in Avengers Endgame, a sort of mullet haired Gemma Collins gripping a hammer rather than a ham and cheese toastie. In Extraction Hemsworth is him back in full on action mode as Tyler Rake, a mercenary lounging around in India drinking beer and tombstoning into the sea all in an effort to drown the traumatic memories of the death of his young son. At the same time Ovi (Rudhaksh Jaeswal) , the teenage son of an imprisoned drug lord goes about his private schooling – there’s no sign of the smug, arrogant smirk about him that the usual over privileged kid of a wealthy celebrity has such as Brooklyn Beckham, a lad with seemingly little self awareness that if his parents weren’t who they were there’s precious little hope the actresses and models he pursues would give him a second glance.

But Ovi is a grounded teenager but in a brutal kidnapping finds himself whisked away by an enemy drug lord’s gang and held captive whilst his imprisoned father instructs his second in command to get his son back or a similar fate will befall him. It’s where Rake and his support team come in, hired to make the extraction – get in, get out, take the fee, game over. But of course it’s not going to be that easy. With Ovi having been taken captive in Dhaka, Bangladesh , Rake makes himself known to  the kidnap gang before  he goes full mental jacket on them and there is a blistering action scene that takes up a significant section of the film that like, the Oscar nominated  ‘1917’ is seemingly filmed in one long astonishing shot that takes in a car chase, a foot pursuit through buildings and over rooftops with fire fights and fisticuffs galore. It is an utterly exhilarating sequence with the camera whizzing through car windows, along narrow corridors and falling from heights it is a bravura bit of film making if exhausting to watch.  But now with Rake’s team having been double crossed and their extraction point compromised he has to get Ovi out of the city as the drug lord’s mob of goons and military men hunt them down.

Extraction then takes us on as series of set pieces and double crosses through a city under lockdown by a corrupt military owned by the drug lord.  It’s that first extended action set piece that stands out and sets the bar so high for itself that it never really tops it even in the climax when Tyler has to get the boy across a guarded, traffic locked bridge to the final extraction point.

Written by Avengers helmer Joe Russo based on the graphic novel, ‘Cuidad’, Extraction is the directing debut of stunt co-ordinator Sam Hargrave who worked with Russo on many of the Marvel films but here he’s taken the John Wick franchise and Atomic Blonde as the template and run with it. Hargrave is the latest in a long line of stunt men that have become directors which reaches all the way back to Hal Needham directing Burt Reynolds 70’s action films ‘Smokey and the Bandit’  to today’s action films by David Leitch and Chad Stahelski that in themselves have drawn influence from the bone crunching fight fest The Raid and its sequel. Extraction is the latest film that shows that these ex-stuntmen are proving to be the best action directors in the business setting a new standard and this is a film that would have had an even bigger impact on a big screen. But its credit to Netflix that they are stumping up the cash for high octane films like this as well as Scorsese’s The Irishman even if it did end up coming away from the Oscar’s empty handed.

Extraction is not without its faults – street kids are despatched, particularly in one sequence with a casual callousness which makes uncomfortable viewing yet at the same time there’s a scene with a group of wannabe killer kiddies where its difficult not to want to see them get their come uppance as they attack Hemsworth. And the developing father / surrogate son relationship between Rake and Ovi is not wholly convincing  and sits a little uneasily with the Call of Duty style mission. Nonetheless Extraction  is a superior action fest.