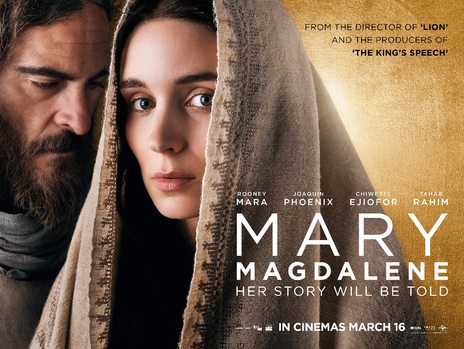 With all the #MeToo and #Time’sUp campaign’s going on it’s now extending, rightly so, to the perception of female historical figures which here is Mary Magdalene. Written by Helen Edmundson and Philippa Goslett it’s a an attempt to reset the perception that Mary Magdalene a key apostle of Jesus was not a prostitute but was an intelligent and independent woman who rejected her families insistence of marriage that was the norm.

This perception of Mary Magdalene as a prostitute was one laid down by Pope Gregory in 591AD and perhaps it was a catastrophic and misogynist attempt to balance the ideal of Mary, mother of Jesus as Madonna . Either way it’s a myth that continued for hundreds of years until denounced relatively recently by the Pope.

So what we have here is another sincere performance from Rooney Mara (‘A Ghost Story’) in a role that’s  as intense as her Lizabeth Salander in ‘The Girl with the Dragon Tattoo’. Matching her in intensity is Joaquin Phoenix (‘You Were Never Really Here’) rocking the hipster look as Jesus and both spend a lot of time staring meaningfully at each other. The film suggests that Mary Magdalene becomes a favourite apostle of Jesus over all the others who were male. It might therefore be the reason why she was the first to see Christ at the resurrection and tell the other apostles. 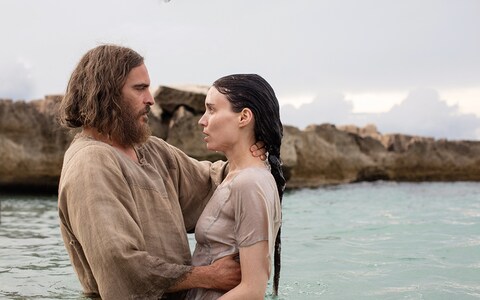 This follows the last few months of Jesus life and goes through a series of well known moments before Christ is crucified all presented in a relatively low key way and the crucifixion itself is almost anti climatic and the resurrection even more so when it’s the cornerstone of the Christian faith. The film does also overlook several significant moments namely Peter’s denial of Christ but perhaps most notable of all for the title character is the moment when she washes Christ’s feet using  her hair.

After so many notable films with Zefferelli’s 1977 landmark TV version of Jesus of Nazareth still large in many minds it’s a unenviable role for Phoenix though he acquits himself well with several scenes where he loses his rag at the Temple being turned into a market or people scrabbling to be healed by him which has the crowds behaving like it’s Black Friday at Asda.

The script has an intelligent and political take on aspects of the story with the apostles believing that Jesus was there to overthrow the Romans and that the Kingdom of God would be an Earthbound manifestation rather than a heavenly one and with regards to this its really only Mary who understands Christ’s quiet message. Equally it’s for this reason that its Judas betrayal that’s presented as a misplaced belief that it will motivate Jesus into taking action yet oddly the film does ignore the 30 pieces of silver.

This is a respectful and thoughtful film with Mary at the centre and attempts to present her as important an apostle as Peter. Garth Davis, whose previous film includes the tearjerking Lion has presented a feminist take on Mary Magdalene without recourse to the vulgarity of the idea of her having sex with Jesus hinted at with Scorsese’s The Last Temptation of Christ and the pot boiler antics of The Da Vinci Code.