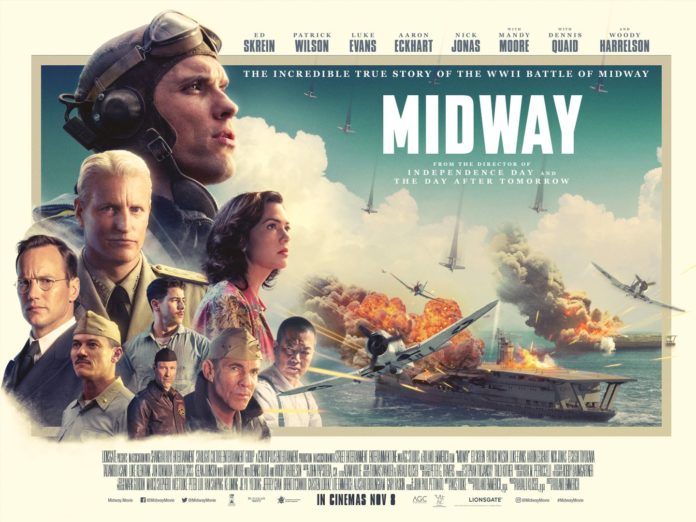 In retrospect director Roland Emmerich made his summer blockbuster ‘Independence Day’ too soon.  About twenty years too soon because that iconic shot of a spaceship blowing up the Whitehouse would have raised an even bigger cheer if Donald Trump had been walking through the front door with a quizzical look on his face, not at the giant spaceship above him, but that Melania was in the cockpit and pressing the button marked, ‘Giant frickin’ lazer beam‘ as the building got blown to smithereens and a comb-over wig spins across the screen in slo-mo. Well we can dream.  Since then Emmerich has been the master of disaster orchestrating spectacle far more pleasingly than Michael Bay does.  He’s never topped Independence Day, though it’s not for want of trying but Midway sees him turn his attention to true life events which were equally spectacular.

To a generation Midway is little known in fact for Z-list salad dodger Gemma Collins the only history she takes an interest in is the Best Before date on a family pack of custard slices.  So now the Midway history lesson……..starting on the 4th June 1942 six months after Pearl Harbour bought the US into the Second World War, the battle of Midway became a crucial battle in the Pacific ocean. The Midway in question was the Midway Atoll and is where the US navy defeated a huge Japanese fleet who were intent on neutralizing any strategic power the US had in the Pacific and solidifying Japan’s dominance and preparing for further attacks on Fiji ,Samoa and once again Hawaii with the intention of taking the West cost of America. The attempt to lure US ships into a trap backfired when US intelligence determined the date and location of the attack and were then able to prepare their own counter attack. The Battle of Midway resulted in four Japanese carriers being sunk, one of which had been involved in the Pearl Harbour attack. The loss of ships and highly trained men by the Japanese were irreplaceable certainly in the time they had and with the US manufacturing industry able to quickly replace its own losses.

It was an epic battle and it’s easy to see the attraction for Emmerich, in what was his first war movie after The Patriot, especially for a script that had been written by Wes Tooke who had an in depth knowledge of this particular chapter in US military history and the script , not altogether successfully, attempts to give balance to the Japanese officers who had much to lose if they failed their Emperor. Midway is typically Emmerich in scope and scale – unable to get a naval carrier for the shoot the production designer Kirk Petrucelli built a full scale deck with two working planes inside one of Canada’s biggest sound stages and here the CGI and blue screen is not always as convincing as it could be.

Emmerich’s Midway epic also attracted a decent cast that included Patrick Wilson, Ed Skrein, Luke Evans, Dennis Quaid, Aaron Eckhart, Nick Jonas and Mandy Moore – so something for every audience demographic and let’s not forget Woody Harrelson sporting a blonde wig that makes him look like Mr Whippyhead.  The huge scale of Midway was matched by its budget of $100m. Unfortunately it only made a $125m worldwide which is  a shame as Emmerich at his best is far better at large scale action than someone like Bay who edits so quickly it becomes incomprehensible – Exhibit A : All the Transformers movies.

Despite its lacklustre performance at the box office Midway is worth a look  and the disc has some decent bonus features with the Blu ray having more features than the DVD and Emmerich’s commentary being worth a listen whilst many of the featruettes are of varying quality if a little vanilla. 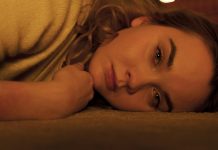