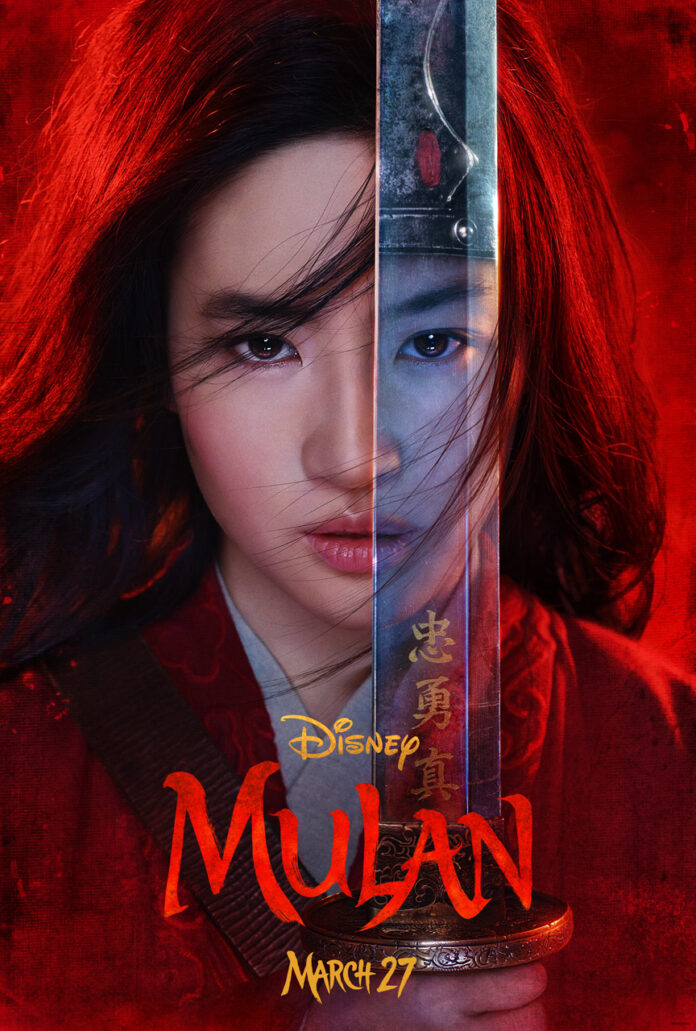 With China gifting the world a Kung Flu pandemic it seems something of an unfair swap that the West offers a sumptuous $200m blockbuster but that what’s happened with Disney’s latest live action film of their 1998 animated feature Mulan. Yifei Liu plays the title character, a young Chinese  maiden living in a small village with her sister and elderly mother and father who has a permanent leg injury.  Mulan is something of a tom boy with an unerring gymnastic ability that’s first glimpsed when she’s chases one of her father’s chickens across the rooftops and into its pen. However it makes little difference to local tradition as she is painted and powdered, wrapped in a kimono and trained in the art of taking tea –  a nicely shot set piece which ends in calamity and Mulan able to demonstrate her gymnastic skills.

It’s when the consort of the Emperor (Jet Li) rides into the village to conscript a male from each family to fight a horde of Northern invaders to the province that things take a turn for the worse. With no son Mulan sees her father instead conscripted into the army despite his disabled leg and overnight she covertly appropriates his armour and sword and assumes the mantle of a male in order to take her father’s place at the training camp. It’s all led by Commander Tung (Donnie Yen) a no nonsense soldier who dismisses those trainees who bring dishonour on his brutal training techniques.  It’s these scenes at the camp which can’t escape the ‘training montage‘ seen in every film from the Rocky films to The A Team.  Disguised as a man Mulan enters into ‘Tootsie’ territory with her identity in danger of being revealed when the men are told to shower and there’s further levity when the commander tells his recruits that he is, ‘going to make men of every single one of you!’ Inevitably the new recruits are to face off against the Northern invaders attacking the province garrison by garrison aided by a witch who shares the same make-up artist as Michael Stipe in his later REM days having had a white stripe of paint daubed across her eyes. Perhaps it’s somewhat unrealistic to expect the raw recruits to defeat the marauding mass of mentalists on horseback and it’s Mulan who saves the day. The conventions of the drama demand that Mulan will be forced to reveal her true identity but that the message of the movie is very much a feminist one in the #TimesUp movement and here, in an ancient era that pushes the theory that only men can lead others, is as necessary as it has ever been. And that extends as far as the director Niki Caro helming the biggest budgeted film of her or any other female directors career and she handles it with aplomb. Whereas Tenet was a summer blockbuster that has decided to go the cinematic release route, Mulan, an equally expensive film, is going the streaming route which is perhaps understandable with studios only too conscious of what is at stake but it’s a shame as director Niki Caro has made a film that misses much from not being seen on a wide screen that would only enhance the stunning vistas, set design and costumes. Caro has done an admirable job here adopting many of the tropes of Chinese cinema with characters spinning up into the air mid fight whilst others catch arrows mid flight and cameras tilting at 90 degrees during action sequences. This live action is something of a different entity from its animated original with no songs and the Eddie Murphy jive talking comedy dragon sidekick consigned to the dustbin replaced instead with a Phoenix motif that occurs throughout.

At two hours Mulan is thirty minutes longer than the animated predecessor a mistake made by the live action Dumbo and once again the film does not benefit from this. Nonetheless Mulan is an impressively shot and extremely enjoyable film endorsing the Disney message that, ‘devotion to family is an essential virtue’ which may might seem outdated but is rightly at the core of the studio’s best films. 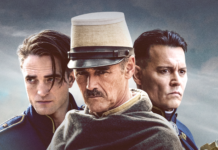