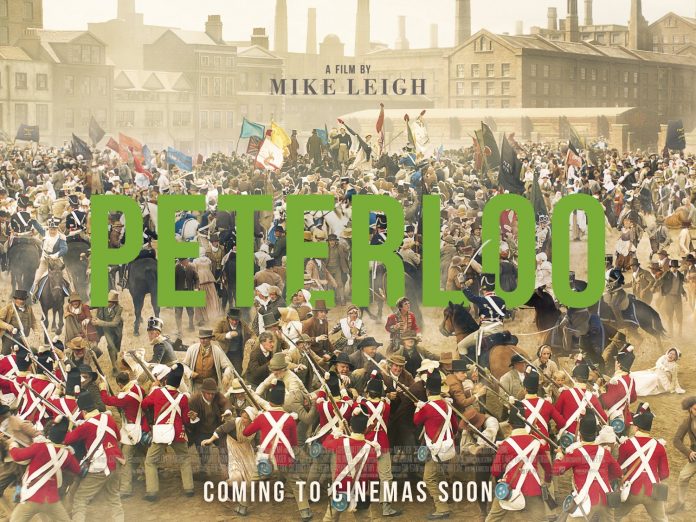 If it wasn’t for Swedish power pop rockers Abba would Waterloo still be remembered?Obviously yes presumably because Peterloo doesn’t quite have the same ring about it. Nonetheless Mike Leigh’s new film opens with a lone army bugle player in the middle of the Waterloo battlefield bewildered by the carnage and explosions going off around him. Suffering from PTSD he makes his way home barefoot to his home up North.

With appalling weather matched only by the poverty against a background of thundering weave looms in cavernous mills it’s certainly grim up North but with stunning production design. It’s here that the bugle player collapses into his family home where his mother Nellie (Maxine Peake) greets him aiding him back to recovery. But it’s not easy as she, along with every other family, is scrabbling a living made worse by wages being cut due to the introduction of corn taxes and the rising cost of wheat to make a basic loaf of bread getting increasingly expensive all driven by London ministers in that den of iniquity, Parliament, not caring about what happens in the North.  With petty crime on the rise the locals find themselves penalized by four magistrates doling out punitive sentences for the most low level of crimes in one of the film’s best sequences as each peasant pleads for clemency for sentences that range from being carted off to Australia to be hung.  Peterloo very quickly becomes ever more downbeat so it’s hardly surprising that the people begin to rise up and speak out demanding reforms. 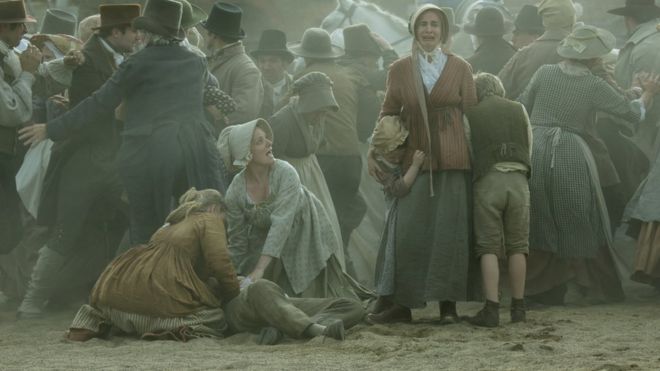 Mike Leigh’s films are something of a national treasure having made classics that include the brilliant Abigail’s Party to his later films many of which have earned him Oscar nominations for directing or writing. Again he writes the script for Peterloo but it’s unlikely he’ll get a nomination for writing here. Whereas many of this films have always had a glimmer of humour this is relentlessly downbeat and grim with many scenes featuring the reformers speechifying to crowds about the social injustice of it all and many of these scenes run back to back with much being repeated by different actors. It’s hardly a surprise then that the film runs to two and a half hours. 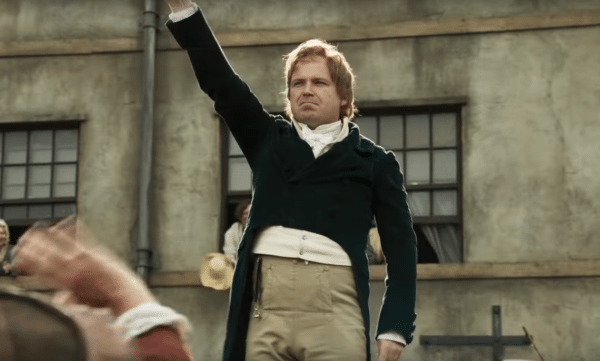 The reformers persuade the well known London based reformer Henry Hunt (Rory Kinnear) up their Petersfield to address what turns out to be an enormous crowd of 60,000 peasants and understandably it sends the magistrates, nobility and the gentry into a tizzy fearful of insurrection and the overthrow of their own comfy lifestyles which have usually been achieved at the expense of the working class. As the reformer Henry Hunt, Rory Kinnear is good showing him as both keen on his own fame publicizing his presence with a white hat amongst the cack covered working class yet at the same time insistent that the rally be peaceful  and that no one should be armed with any weapon which might provoke the authorities. Some of the best scenes are not the ones of the at times interminable speeches but the squabbling of the magistrates and gentry determined to disperse the crowds from the rally but each with their own idea as to how best do this. Ultimately it results with a hastily scribbled arrest warrant for Hunt and an order for the local Yeoman, who have got leathered on lager, are aided by the military to intervene. It’s this scene which the film is building towards the slaughter of innocents and the furious suppression of democracy. Yeoman on horseback charge the crowds slashing and stabbing indiscriminately with swords. Men are impaled, women are beaten and babies are trampled. It’s incredible that this ever happened in Britain yet this is a true story that’s often overlooked.

Leigh’s film though is overlong presenting the working class as oppressed by the evil Southerners in London and it’s all a bit stereotypical, something  which Leigh subverts  or dispenses with in many of his other films. Peterloo was a defining moment for democracy and it’s a theme which is still highly relevent today in a Brexit era but Leigh’s film is overlong bogged down by too many speeches.