The 70’s were an increasingly poor decade for Disney with their animation arm starting to flag with ‘Robin Hood’ followed by a number of live action films including a couple of Herbie films, Freaky Friday, The Shaggy DA, One of our Dinosaurs is Missing, & The Apple Dumpling Gang before having another bash at a live action/animation hybrid that they’d tried previously with moderate success with Bedknobs and Broomsticks. This time it was to be Pete’s Dragon directed by English director Don Chaffey and a stellar cast of old school Hollywood stars including Mickey Rooney, Shelley Winters & the ludicrously monikered  Red Buttons  (yes, that really was his name  though you never heard of his siblings, blue, yellow or lost) With characters that burst into song for no apparent reason and animation which even then looked dated it ran for a two turgid hours.

30 years later times have changed with Disney studios an absolute powerhouse having been the first studio this year to exceed $5billion at the box office in the quickest time ever. The studio over the past few years has found success making live action films of their cartoons (Cinderella , The Jungle Book) and are now looking over their back catalogue and have now started remaking their live action films with state of the art technology and for that reason Pete’s Dragon was ripe for a remake. Stripping out all the immensely unmemorable songs (unbelievably one of which was Oscar nominated but was still immediately forgettable) and introducing a CGI dragon that blends in convincingly with the live action.

Despite the House of Mouse being perceived as being all sweetness and light with its focus on the value of family it’s also featured something to upset not just kids but adults alike – who can ever forget the death of Bambi’s parent at the hands of hunters? and here much like Bambi the film starts happily enough as Pete sits in the back seat of his parents car as they weave along a mountain road that smacks a little of the opening scene of The Shining so you know something bad is about to happen and Lo! They have a fatal car crash with only Peter surviving to scrabble from the car into the woods with his dilemma taking a turn for the worse when a pack of wolves corner. It’s the dragon who Pete names Elliot, after a character in one of his books, that rescues him and they forge a friendship. Fast forward six years and the pair of them have lived undiscovered in the woods. All is well as he lives an almost feral existence until loggers, led by Karl Urban who seems a keen advocate of deforestation with only Bryce Dallas Howard’s perky sheriff’s assistant keen on preventing him, accidently come across him.

Taken into care he does his best to escape back to the woods to be with his pet dragon. It’s this that sparks the interest of Howards father played by Robert Redford who grows increasingly grizzled in every film he appears in. The dragon in the woods has become something of a myth to the townsfolk with only Redford believing as he came face to face with the dragon when he was a boy too.

This is a far more streamlined adaptation than the original giving it a contemporary setting, stripping out all the songs and introducing a loveable dragon and it’s because of this that younger children may be upset when Elliot is captured. Though not as effective it owes much to Spielberg’s E.T. which is no bad thing.  But this is a far pacier remake of a sluggish original albeit still with paper thin characters but the shorter running time means there are few moments that drag and ensures that it doesn’t outstay its welcome. For kids the dragon is in turn funny, sad, heartwarming and uplifting and it’s magic is ideal for kids . 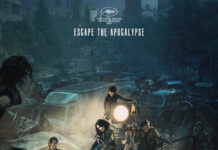