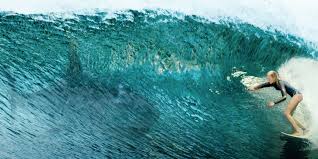 Jaws gave the world a new movie menace which has been recycled umpteen times  and whether it be alleged true life stories (Open Water), scientific guff (Deep Blue Sea) or utter shark shite (Jaws the Revenge) it’s too good a monster for the film makers to ignore and scare everyone back out of the water. So what better way to ruin anyone holiday who intends to surf than with a shark vs surfer movie?

With Blake Lively as a student doctor who’s dropped out of college mourning the death of her mother she goes to a deserted Mexican Bay where the pair of them used to go surfing together.  All is gay in the bay with director Jaume Collet-Serra shooting some spectacular Gods eye view of the stunning seascapes matching this by dipping his camera below the surface with the constant suggestion of danger whenever she dangles her hands and feet in the water. The hints of danger of are fleeting unlike the shots which seem to linger a little too long at times on Lively’s bikini clad bum.

It’s only with the introduction of two other surfers that are destined to be shark fodder at some point that the danger becomes more imminent although when the shark does make itself known its only to knock Lively off the surf board where she scrabbles to a small rock that the low tide has revealed leaving her stranded 200m from the coast. It’s this solitary location where she  is stranded with only a disabled sea gull for company that the film deliberately confines itself  as she struggles to find a way out of her predicament knowing that the rising tide will overwhelm her place of sanctuary.

The Shallows is one of those stripped down to the bone minimalist movies with a tiny cast and moments that make your feet twitch whenever Lively dips hers in the water.  Like Spielberg’s Jaws, Serra has wisely kept the sharks appearance to a minimum aligning Lively’s point of view with the audiences not knowing where the shark is searching the sea surface checking as to whether the beast is still in the area.

Some years ago Blake Lively’s husband, Ryan Reynolds made a similar one location movie called ‘Buried’ which had him buried alive in a highly claustrophobic film and this is her version but conversely  set in a wide open space which she can’t really move away from. It’s the question which the audience are left to ponder  – How would you save yourself?

Special effects especially CGI have eliminated the troubles that Spielberg had with his rubber shark (which appeared to have jowls) and here the shark, when it does appear, is impressively terrifying and is sparingly used to great effect in what is possibly one of the best shark films since Jaws and at 86 minutes its pacy set pieces drag you into the thick of it with an audience pleasing cheer out loud finale that’s sure to make this a summer smash.