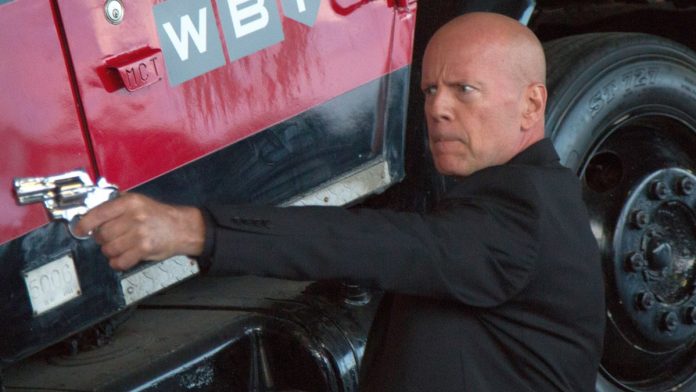 With the unholy trinity of Eighties action stars scrabbling for relevance (Schwarzenegger’s return to films has been less than stellar whereas Stallone’s has return to Rocky has earned him another Oscar nomination) it’s left to Willis to hold the torch and his pedigree has been patchy with only the ‘Die Hard’ franchise still going though increasingly tarnished by each subsequent film. ‘Precious Cargo is not going to reinvigorate the genre for him and despite being the only household name in the film he plays second billing to Mark-Paul Gosselaar (no, me neither) as Jack.  After a Guy Ritchie-lite title sequence it picks up with Clare Forlani as Karen a pregnant criminal in the middle of a back robbery taking a phone call from Willis’s Eddie, a local crime lord, who’s miffed that she’s doing a job that he had planned and demands all the proceeds. A pretty unlikely outcome seeing as he’s also called the police too. Having given the police the slip and now in debt to the murderous Eddie she approaches her ex husband Jack to help with a diamond heist so that she can pay back the debt and start a new life.

Inevitably Jack agrees and with his own crew they carry out the heist knowing that it’s yet another job that Willis and his gang were planning too. It’s all very formulaic and includes those staple action lines, ‘Let’s rock n roll!’  (never hear that line in a mountaineering movie) and the increasingly favoured, ‘Look alive, people!’ a line which you rarely hear in zombie films and the plot plays like a first draft version of a Jeff Abbot novel.

Willis as might be expected is confidently conniving as he breezes through a role which normally has him as the good guy so it makes a change to see him being bad although he does have an unsavoury scene where he threatens  the pregnant Forlani who is a strikingly steely eyed in her best role in years. With piercing almond shaped eyes that lend itself to the glamour puss roles she used to play but have given way to her age where she is ideally cast.  Gosselaar, who has all the presence of a US TV actor, bears a resemblance to Hugh Jackman but is perfectly adequate in the lead role. But its actress, and we use the word advisedly her here, Jenna B Kelly as Logan, one of Jack’s sidekicks that brings things to a crashing halt. Presumably her middle initial is for Bland as anyone would be hard pushed to deliver lines in a more flat and unremarkable way and she seems to have only just learnt her lines moments before the director shouts ‘Action!’ Monotonally reciting words with a delivery that makes Steven Hawking sound emotional she mistakes smoking a cigarette like a teenager trying to be cool behind the school bike sheds for character development. It’s a master class in how not to give a performance.

There’s nothing exceptional about the plot which if Willis had not been on board would have confined it to immediate direct to dvd release as the action is at best,  generic, but it muddles along well enough to fill 90 minutes. Bizarrely though it features a wholly unnecessary gag reel during the credits ,something which is coming back into vogue and is best left to comedies, although recent release, ‘The Boss’ had a wholly gag free gag reel.  Whereas the film benefits from Willis (albeit in a role he plays all too often) he is absent from the  gag reel which is odd as he smirks through every thing else he normally does.