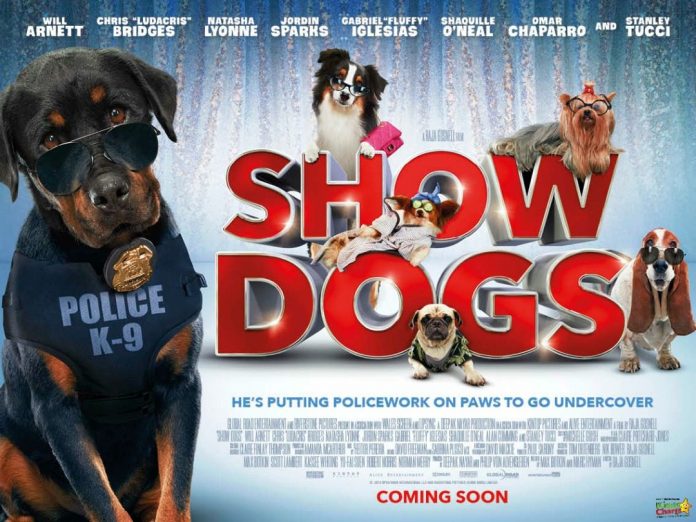 As a bit of pub quiz trivia it’s not widely known that breast implants were first experimented by using them on a dog which apparantly then went on to win Miss Newport 1976. So in a shoe horned link Newport is bizarrely where the opening scene of Show Dogs was shot doubling up for a West coast US shipping port where Max, a Rottweiler police dog is on a stakeout and converses with 3 pigeons watching the operation.Yes it’s a talking animal film so no prizes for guessing that half term must be here.

Max is one of several talking animals employed by LAPD and teams up with Frank a human cop played by Will Arnett who must be wondering why his career has hit such a low. Together they investigate the kidnapping of a prize baby panda which leads them to Vegas and a Show Dogs competition where the biggest surprise is that Amanda Holden is not competing.  Max enlists the help of a bunch of other dogs voiced by Alan Cumming (Battle of the Sexes)  & Stanley Tucci (Transformers The Last Knight) which suggests that they both had unexpected tax bills to pay.

With humans very much secondary to the action Show Dogs is more of a testament to the skills of dog handlers & CGI technicians in getting the dogs to talk. Perhaps the real unsung heroes are the on-set dog poop scoopers who must have been working over time judging by number of dogs on show here.

From talking animals to kid friendly set pieces there’s enough here for kids to enjoy and it does whizz along but these films do smack of studio cynicism. Directed by Raja Gosnell, whose previous includes The Smurfs and Beverley Hills Chihuahua, he is ideally suited to helm this but is hardly a step up.

Albeit there are some lurches in tone for a family film including a farting dog and a dog scrotum squeezing scene. We’ve never understood why show dogs have their scrotum’s grabbed by judges and we can only think that many years ago some deviant persuaded the other judges that this was a legitimate technique although we’re more inclined to believe that it was actually a judges hobby that he managed to turn into a job. Although if there’s anything to be said for incarnation then we’d like to come back as a show dog.

Though set in Vegas, Show Dogs  was part financed by Screen Wales which might explain why so many of the interiors were shot in a studio just outside Cardiff. The exterior shots are definitely Vegas because frankly no matter how much you festoon Newport town centre with lights it’s never going to look like Vegas regardless of how much money you throw at it the Vegas good time girls don’t parade up and down the high strip munching on chips, vomiting in doorways  and urinating in the gutter.

Playing much like a cross between ‘Turner and Hooch’ & ‘K-9’,  Show Dogs optimistically ends with a hint at a sequel. The film makers are over optimistic and they should paws for thought as, though this is not dog eared, it’ll have parents feeling ruff (‘You’re fired!’ – Ed).