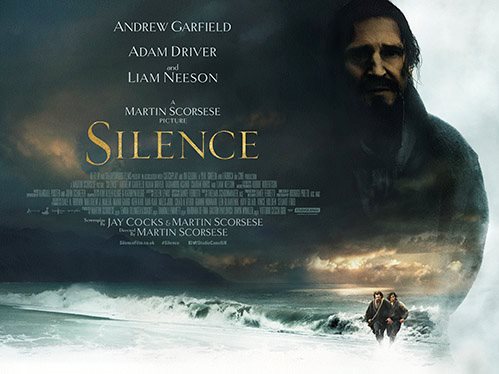 Regarded as America’s greatest living film director Martin Scorsese is on something of a roll after his last film, ‘The Wolf of Wall Street’ being his most commercially profitable ever making over $392m and gathering some Oscar nominations along the way. It’s the sort of success that gives directors a certain amount of freedom by the studio to make whatever film they next want to direct. Unfortunately those expecting more of the same are in for a shock with his new film, ‘Silence’, a critically acclaimed yet little heard of book but which appealed to Scorsese’s religious sensibilities. It’s a film that he’s  been trying to make for 3 decades but after years of financial wrangling and issues over the film rights he’s finally made it.

Catholicism has always been a part of his films right back to his early success with ‘Mean Streets’ to his most overtly religious film ‘The Last Temptation of Christ’, a film which enraged some religious groups  which was unfair because in retrospect that film a sincere exploration of faith.  ‘Silence’ is no different on that front.

Set in17th century Japan where Christianity had been banned and missionaries and Christians were all but hunted down, persecuted and invariably killed in some ungodly manner as seen in the film’s opening scene where  several priests are tortured with boiling water in an attempt to get them to apostatise and renounce their faith whilst their mentor Father Ferreira (Liam Neeson) is forced to watch their agony. Much like the letters of the Apostles in the Bible this is all narrated in Neeson’s voiceover from a letter he writes to his own church back in Portugal which arrives several years after contact with him in Japan has been lost.

The letter is read to two priests that Neeson has mentored , Rodriques played by Andrew Garfield who at times has the most outrageously bouffant hair  and whose movie idol matinee looks are balanced by his fellow priest, Garrpe played by Adam Driver, who in his first scene looks like a living Toby jug. We’re no oil painting but here Driver has the sort of face that you want on a mantel piece to keep the kids away from the fireplace.  Both determine to find the Priest despite the dangers and travel to Japan where the locals who have converted to Christianity and practise their faith in fear of the inquisitors who travel the countryside persecuting anyone they suspect in the most barbaric manner. These inquisitors, all played by local actors, are ruthless and one who smiles throughout his interrogation is especially chilling. The test they put the devout villagers through are seemingly innocuous to the faithless but offensive to the true believers.

Garfield and Driver’s priests spilt up early on in the film which is no bad thing as their scenes together are not particularly engrossing and the film now focuses on Garfield with the inquisitors ultimately catching up with him and the last act of the film centres on the psychologically oppressive ordeals he endures at their hands in their effort get him to apostatise.

This is undoubtedly an incredibly sincere film by Scorsese and is thought provoking right up to its very final shot but at 161minutes it’s a long time getting there in a film which at times is a little repetitive which will not help its cause because this is not a film for fans of ‘Goodfellas’, ‘The Wolf of Wall Street’ or ‘The Departed’ as this is far from commercial in its appeal. There is much in here to appreciate whether it be the stunning photography where the locations shot in Taiwan doubling for Japan are back drops to some stunning sequences notably the believers crucified at the shore to an incoming stormy sea and the scenes as Garfield battles with his crisis of faith as he wonders if at times he’s praying to nothing are provocative. The script has regular nods to the Bible when the inquisitors offer the villagers three days to deny Christ and are offered silver pieces to do so, Perhaps best of all in the supporting cast is Yôsuke Kubozuka as a convert whose faith constantly wobbles at crucial moments when his faith is tested and his parallel with Judas is obvious.

Neeson, who book ends the films with his scenes looks a little like he’s come off the set for ‘The Phantom Menace’ at times but he is the one whose appearance has to justify the quest and what must have been his own idealism has fractured over time. Though the film wears its faith on its sleeve the subtext of the film is really of confronting intolerance and with the world in such a state and a new US leader seemingly intent on embracing intolerance the film is a prescient reminder to stand up and stay strong in adversity.