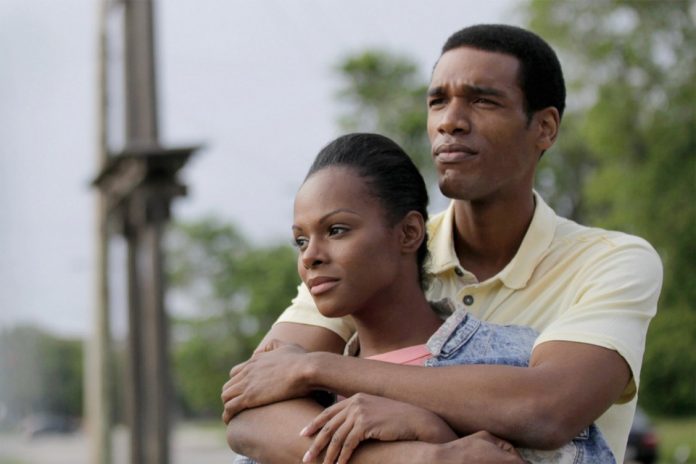 As we enter the final hurdles in the US presidential election where  the leader of the free world will be either a comedy comb over, beetroot faced bigot or a seemingly terminally ill, bare faced liar it seems the time is right to look at Mr & Mrs Obama. We’ve had no end of presidential bio-pics from Spielberg’s ‘Lincoln’ to Oliver Stone’s obsession with presidential films having made ‘Nixon’, ‘JFK’ & ‘W’ and now we have ‘Southside with you’ which ignores Obama’s  two terms in office and instead focuses on Obama and Michelle : the early years or to be exact Obama and Michelle : their first date. It’s seems a pretty thin premise to go back to an afternoon in 1989 when Barack was a temporary employee at a law firm along with a Michelle Robinson as she was then but actually this is thoroughly engaging for its most part.

The phrase ‘all talk and no trousers’ would seem equally appropriate and inappropriate for a film about a first date but this is a film which is all dialogue and there are few who can carry out such a dialogue heavy film, apart from maybe Tarantino, even if like this it runs only for a fleeting 84 minutes and admittedly it does flag slightly towards the end. With Parker Sawyers as Barack and Tika Sumpter as Michelle both putting in assured performances and there’s an easy charm to his chain smoking and punctuality free lawyer and her fiercely independent woman. Sumpter, who also produced the film, has the less sympathetic role as she, at times, becomes annoyingly stroppy in her insistence at maintaining that their afternoon is not a date wary that her image at the company would be tarnished if it were known that she was dating a temporary employee. It’s written in such a way that you’re crying out for her to fall for his obvious charm and she only temporarily lets herself go when she dances to a band of drummers in a park with a small child.

Of course only two people really know what was said that day and neither were likely to have recorded it verbatim for future use so much of this is obviously conjecture on the part of writer / director Richard Tanne who keeps it all moving along nicely. Inevitably the script has its moment where we finally get a glimpse of a future world leader and it’s at a community meeting about the building of a new church that we see him shine and he holds his audience entranced with a convincing oratory which takes in a veiled compliment to Michelle as well as praising the US and it all gets a little too schmaltzy by the end. In the end it’s a speech which acts as a precursor to his campaigning logo, ‘Yes we can’ although eight years later it seems that a more accurate logo would be,‘No we couldn’t’.

Aside from this it’s a charming if slight film built around an initially stroppy Michelle trying to resist the easy charm of a patient Obama as they walk around Chicago’s  Southside.  Any know whether they did get together?