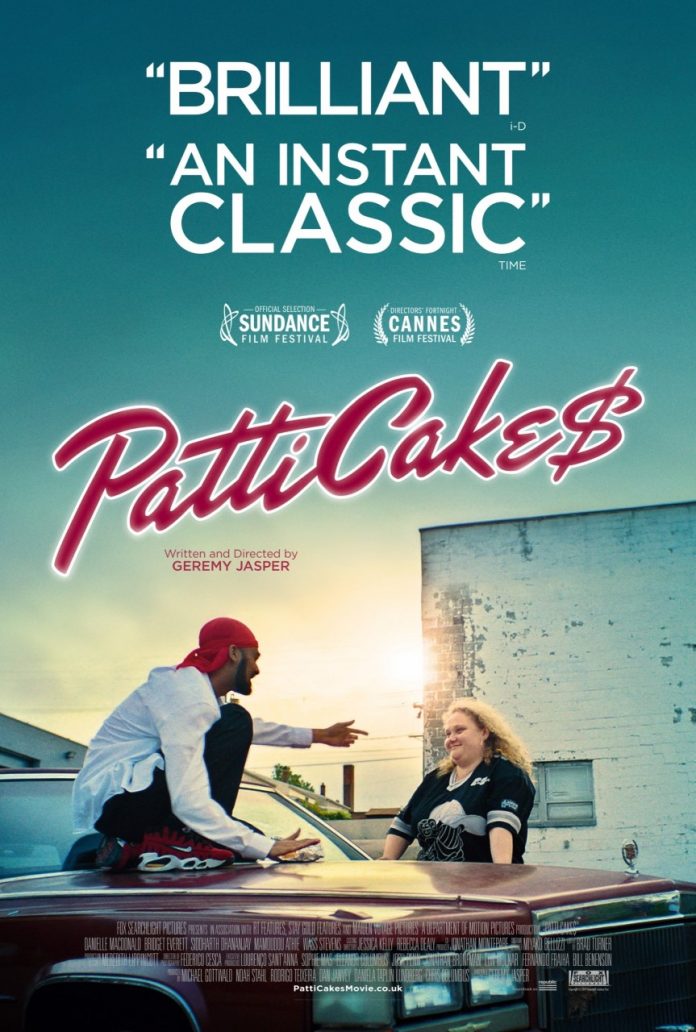 Perhaps the only gift that Simon Cowell has contributed to TV entertainment is offering up an array of feckless tosspots with a deluded belief in their ability to trot out a tune delirious to the fact that that an entire nation is laughing at them on prime time TV. It’s given rise to a whole generation of equally deluded numbnuts swaggering down the high street looking like the bastard offspring of an illicit liaison between a 17th century mental asylum and a car boot sale. Regrettably our Editor has also fallen foul of this delusion and frankly after he’d seen the NWA biopic ‘Straight Outta Compton’ and the sight of a paunchy middle aged white bloke white parading around the office with his trousers hanging around the back of his knees baring his best Primark pants was luaghable. (Yo. don’t diss me! Aiiiiii – Ed). However in fairness for every Jedward there is the occasional talented individual.

Patti Cakes starts off with a morbidly obese teenager Patti (Danielle Madonald) aka Killa P aka Patti Cake$ aka utterly delusional teen being praised by her rap idol O.Z. until it’s found to be a day dream. Patti is as unlikely a rap star as Notorious B I G and from the very starts you can’t help feeling that this is no different from the equally delusional real life hopeless half wit Honey G from a recent series of The X Factor. Between dreaming of being a rap star Patti works behind a bar where her mother Barb, a really great turn by Bridget Everett who’s a dead ringer for Alison Moyet, frequently breezes into for their karaoke nights and belts out old 80’s power ballads. The faded dreams of her mother seem to be hereditary for Patti as she continues her quest to break in to the rap scene. All seems destined to failure as seen in a poorly attended new bands gig which is also attended by another act , the family friendly, ‘ Bastard the AntiChrist’  – quite why he didn’t stick with his own name of Colin is anyone’s guess?

Their all out to failure seems assured until a pivotal scene where Patti with her friend also an aspiring rapper along with her grandmother (an unrecognisable Cathy Moriarty) team up with Mr AntiChrist and record an astonishing rap, ‘PBNJ’. It’s a  pivotal moment which makes them credible as Patti’s true potential is revealed and she suddenly becomes a viable potential star.  Taking its cue from Eminem in ‘8 Mile’ it all culminates in a rap battle where Patti seems to have transformed into Adele. It carries the standard tropes for this battle over adversity and reach for the stars type of film where she comes up against the misogeny of the rap music scene but it’s not without its large serving of cheese in the climatic rap battle but this is far better than expected especially considering it’s been produced by, of all people, Chris Columbus, a man whose given us the Adam Sandler disaster ‘Pixels’ as well as Fantastic Four,  and rightly forgotten flop, Monkeybone. This is writer director Geremy Jasper’s first feature film and its wholly credible even more so when he’s written the rap tunes himself which are better than a lot of tunes heard these days which are usually a load of utter rap with a silent C.