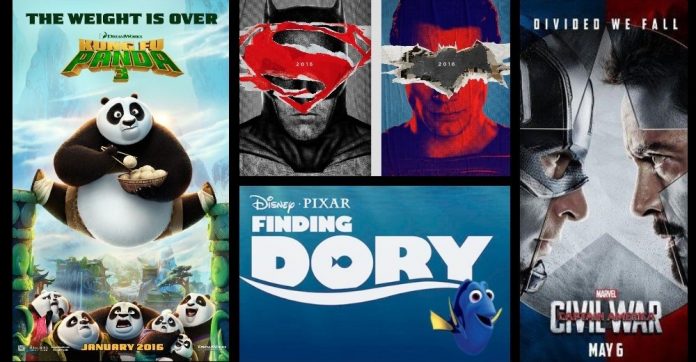 Summer 2016 was not a great one for blockbusters and the year saw several sequels crash and burn and the possible end to one particular franchise. Remakes and adaptations did badly too and, like the Editors belly over his belt, flopped badly (‘you’re fired’- Ed). That said with the huge success again of the latest Star Wars film it’s likely that 2016’s films  will have an overall box office gross higher than 2015 but the fact that inflation and ever increasing ticket prices, especially premium tickets, soar ever upward it can’t disguise the downward trend in cinema attendance as it competes with VOD, steaming, piracy and online entertainment.

An indicator of how things might go started back at the start of the year with Kung Fu Panda 3 which made a healthy $521m worldwide but was markedly down compared to the second film which made $665m and the original which made $631m. But this was as nothing compared to the bomb that was Zoolander 2. In fairness the original was only a moderate success making $60m on its $28m budget but the sequel ticked all the boxes for a bloated sequel to fail (bigger budget, dozens of cameos, a laugh free script). Costing $50m the films international tally was a pitiful $55m which probably would have been equal to the films marketing budget alone although when films fail this badly those details, much like the Editors expenses, are conveniently unavailable. (You’re still fired! – Ed)

The first blockbuster of the year was the hugely anticipated Batman v Superman which opened with an impressive $166m weekend and by the end of its run made $873m. Pretty good if the film hadn’t cost $250m to make with an equal amount spent on marketing the film and Warner Bros really needed it to make $1billion. The studios reboot of Tarzan though visually gorgeous fared badly making only $356m off its rather large $180m budget and director David Yates would go on to far more success with the Fantastic Beasts film later in the year.

Disney studios however have had the best year of any studio ever and have five of the biggest box office films in the year’s top ten grossers primarily due to each film from their franchise divisions performing brilliantly. Pixar’s Finding Dory grossed $1,027,771,569 Marvel’s Captain America: Civil War made $1,153,304, Disney’s The Jungle Book made $966,550,600, Disney Animations’ Zootopia/Zootropolis made $ 1,023,784,248 and Marvel’s Doctor Strange made $657,813,341 and let’s not forget the low budget art house film Rogue One which at time of writing has made $789,714,705 in just over two weeks. Disney stockholders have had a very, very good Christmas. If there was one fly in the ointment it was Alice Through the Looking Glass, a flop costing $170m to make yet earning only $299m –Tim Burtons Alice in Wonderland in 2010 made  £1,025,467,110! And perhaps audiences are getting tired of Johnny Depp plundering his dressing up box. Disney also part financed the normally bomb proof Spielberg and his adaptation of The BFG which cost a whopping $140m only to make $178m worldwide. For Spielberg it was a rare box office failure.

Back to the superheroes franchises and 20th Century Fox’s X-Men Apocalypse costing $178m made a respectable $543 which made up for last year’s Fantastic Four foul up. But things were grim with the much delayed sequel to Independence Day and seemed to be a good judgement call by Will Smith not to appear in it with the film only making $389m (budget $165m) compared to the originals $817m (budget $75m). Ice Age 5: Collision Course was a big disappointment, a franchise which in the past has been highly reliable but this time performed nowhere near as well as the previous four films and made less than half what the other films had made in their opening weekends. With the first four films making respectively $383m ($59m budget), $660m ($80m budget), $886m ($90m budget) & $887m ( $95M) it was a clear disappointment that the fifth film made only $407m ($105m budget) though its unlikely to kill off the franchise there’ll clearly be a major rethink for any future film in the franchise.

The game adaptation of Warcraft opened to generally poor reviews and made an even poorer $47m in the US but was massively boosted by its box office in China of all places taking it to a final total of $433m.

Having lost out with Zoolander 2 it lost out again with the second Teenage Mutant Ninja Turtles sequel,  a decent enough film which made only $245m off its $135m budget. Their Summer blockbuster was Star Trek Beyond written by our own Simon Pegg but again this disappointed with its $343m box office from a $185m budget and perhaps the Star Trek anoraks are dying out with no new younger audience backfilling. It really wasn’t a good year for Paramount with the 3D reboot of Ben Hur really serving them badly and its bad reviews and even worse box office earning a paltry $94m from its $100m budget and probably making it the biggest loser of the year.

Sony did little better with the much anticipated Ghostbusters sequel getting much flack from highly vocal chatroom gloom-mongers. A  project which had been kicking around for years on end with fans eager to see the original team only to find them reduced into a seemingly never ending trail of cameo performances with only Rick Moranis to maintain his moratorium on appearing in films and the new film cost $144m – a huge amount for a comedy – and taking a measly $229m worldwide. Executives really needed it to make at least $300m to break even and to make at least $400m t o make a sequel feasible. There will be much deliberation as to any possible future for the franchise.

Even initially critically anticipated films crashed and burned. ‘The Birth of a Nation’ riding the coat tails of an #OscarSoWhite campaign then found the director, Nate Parker, embroiled in an unsavoury rape allegation (of which he was acquitted) but was unpleasantly celebratory/ accusatory in his public stance. Combined with the fact that the film turned out to play a little too fast and loose with facts didn’t help either and in the end the film was ignored by audiences making only $15m. Director Ang Lee also had a flop with his 3D, 4K resolution,  120fps film, ‘Billy Lynn’s Long Halftime Walk’. It’s technical sophistication however meant that only a few theatres could really show it at its best and it was rolled out in a normal format and failed to make its money back.

Despite all this the studios will still push out yet more sequels and reboots this year and the year after and the year after that. As the great screenwriter William Goldman said when it comes to knowing what will do well at the box office , ‘No one knows anything’.

Films are preview audience tested to within an inch of their life before released and the marketing departments really have to be at the top of their game as audiences, especially the crucial 15-24 demographic,  are swayed by their peers, social media and of course what they read on the AnyGoodFilms website.

The cinemas are battling against steaming services like Netflix and who knows what effect The Screening Room proposal will have on films if it takes off. It could have the studios uniting to try and see it off as the music industry did with Sean Parker’s  Napster who, ironically, is also the man behind The Screening Room.

What will crash and burn this year is anyone’s guess.