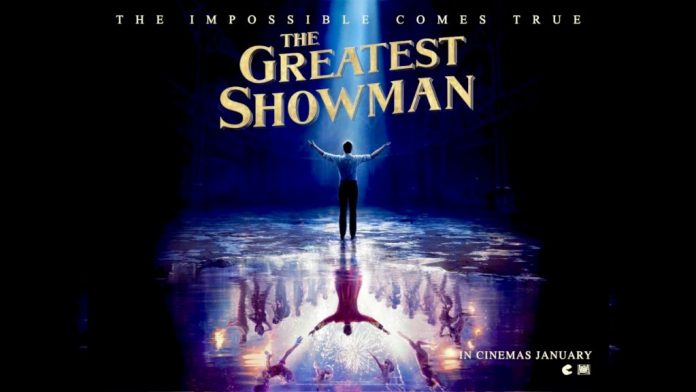 It was an astonishing feat to see the man wrap his own legs behind his head and in true showman style then walk down the street on his hands. Unfortunately it was our Editor after 12 celebratory pints of strong lager who then found himself in A& E for the rest of the night after he put his back out and found his legs locked in that position. Circus ringmaster PT Barnum’s status as The Greatest Showman was never going to have any competition from The Greatest Tosspot, as the Editor is commonly known (‘You’re fired!‘ – Ed).

After all the family  rows over Christmas dinner ‘The Greatest Showman’ is an excuse to get out of the house and see something which is positively upbeat as we follow the story of P T Barnum played with aplomb by Hugh Jackman.  Broad in scope this is loosely based on the story of the showman who came from penury married above his station and through sheer drive and imagination he created the spectacle of circus that would become a phenomena worldwide.

Jackman is no slouch when it comes to musicals having played the lead in ‘Pan’ which bombed and several stage musicals which were a success and is ideally cast as the showboating impresario. Written by Jenny Bicks and Bill Condon ( whose previous includes ‘Dreamgirls’ & ‘Chicago’) have written story that shows Barnum’s first foray into entertainment being a museum that fails before he assembles a bunch of people that include a dwarf, a bearded woman, Siamese twins, a fat man and Amanda Holden (alright we made that last one up) but all freakish attractions for his circus which draws in the crowds. It’s a slightly uneasy and not always successful balance because essentially, though these people form a family when rejected by society, Barnum is ultimately exploiting them for his own financial benefit and it seems to be rubbing the salt in the wound when the devilishly handsome Zak Efron (Baywatch) is employed by Barnum.

The glossing over continues when he becomes the manager of  singer Jenny Lind (Rebecca Ferguson) and leaves the circus and his family to take her on tour where he comes across as a little self-centred though he does resist the temptation to have an affair with Lind. It’s a shortfall of the script that takes an all too brief a nod at social politics with again the circus members being presented as a different social class and throws in an interracial romance between the all too perfectly formed Zafron (who for once is stripped to the waist to show off his enviable abs) and Zendaya ( who was so great in Spiderman Homecoming). None of this is really explored to any satisfaction

Being a musical it should stand and fall on its songs but like so many modern musicals as rousing and enjoyable as some of the songs are notably ‘Come Alive’  & ‘Never’ they are almost immediately forgotten as soon as the song is finished.

Competently directed by Michael Gracey in what is his feature debut he handles the song and dance set pieces well albeit a little too stagey at times and the cast attack each set piece with dynamism but it’s difficult to have much empathy with such an outmoded entertainment as the circus with its thankfully CGI elephants parading around on their hind legs it’s all enough to have the cinemas petitioned by animal rights groups.  It does whisk along at a pace sacrificing its interesting sub stories to do so  but as with most modern musicals its difficult to know just who this is aimed at with its ‘Hey let’s put on a show here’ approach with some subtle anti-Trump jibes but this focuses on being an upbeat feelgood movie whilst glossing over Barnum’s darker side.