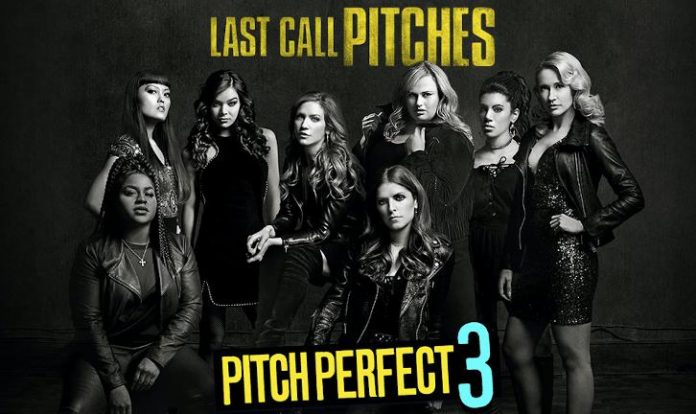 Unlike Amanda Holden caterwauling her way through a West End musical the girls in this third film in the franchise are Pitch Perfect that is if they were singing rather than obviously miming along to a backing track whilst jigging around in front of the camera. Yes, the all girl a cappella group are back with the usual problem of evenly balancing the script between them all but whilst Anna Kendrick (The Accountant) and Rebel Wilson excel in their roles the rest get far less of a look in with the script even getting Wilson to quip that she doesn’t know the names of two of the girls whilst another, Hana Mae Lee, stands around looking like her face has been badly photo-shopped.

The story, such as it is, picks up with the girls having left college and pursuing their careers with Kendrick having become a record producer to some scrawny numb nut knuckle dragger and Wilson as a Fat Amy Winehouse tribute act. The others have also gone on to even less impressive jobs and it’s when the group mistakenly reform at a business conference that they decide to give the group one more try and via one of their fathers military contacts they set off to entertain the troops (though the undoubtedly the troops would be disappointed to find that it was by singing). Anyway they find themselves competing with two other groups to support the headline act DJ Khaled, a real life DJ apparently (No, us neither) who looks  more like a kebab shop owner who has closed up shop and had to eat all his own stock before its best before date expires.

One of the groups call themselves, Evermoist, which inspires some enjoyably smutty jokes from Wilson, and are led by ex model Ruby Rose (John Wick 2) a curiously androgenous yet strangely attractive woman whose role just peters out half way through the film. It’s indicative of several of the characters and plot lines because the love story for several of the girls goes the same way and the gloriously inappropriate a cappella commentators who were one of the best things in the first two films are shoehorned into the film as documentary makers following the group and are largely wasted. It’s John Lithgow (Daddy’s Home 2)who probably comes out of this worst as the Rebel Wilson’s dad who makes a valid attempt to win worst-Australian-accent-ever-committed-to-celluloid award. The girl group come out all of this well with their natural appeal and upbeat approach to their roles which in fairness can’t have been easy for a singing format that is cheesily naff however you look at it. That said their version of Britney Spears ‘Toxic’ and George Michael’s ‘Freedom’ are uplifting and hugely enjoyable in a bubblegum kind of way.

With the film written again by Kay Cannon who throws in some enjoyably knowing references, ‘Whoa! That was a lot of exposition!’ it’s the thinnest of storylines and just about lasts its 93 minute running time.  For fans of the franchise this story brings a definite end to a enjoyably fluffy trilogy which isn’t as good as Part Two but after the bloat of Christmas dinner this is an ideally light dessert.