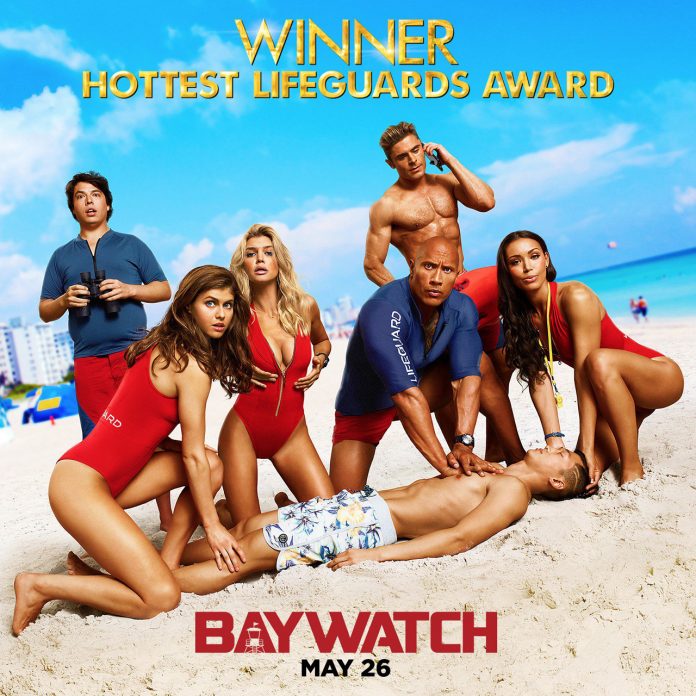 With its glamorous setting, beautiful babes and brain free plots Baywatch became a huge international success.  Unfortunately its British counterpart,  with its greasy chip munchers, litter strewn, sewage laden beaches and plots centred on removing sand from folds of flab was never going to take off.  Whitley Bay Watch was not to be.

So inevitably and somewhat belatedly a film version of the TV series is now upon us suitably starring The Rock aka Dwayne Johnson in the David Hasselhoff role. The light hearted frothy comedy is produced by, of all people, the horror maestro Eli Roth which in certain way is appropriate. Following the TV template this big screen version has a candy floss light plot with Johnson as the head honcho lifeguard recruiting an extra 3 guards via a beach set Iron Man type contest which results in disgraced ex Olympic gold medal winner Matt Brody (Zak Efron), beautiful but stony faced Summer Quinn (Alexandra Daddario) and (un)funny fat boy Ronnie (Jon Bass) to supplement his small team.  It’s the battle between Efron & Johnson to be alpha male that is at the core of the team with the women rightly seen as more competent than both Ephron and Bass but utterly bereft of any beach body bitchiness between Daddario, Kelly Rohrback (who plays Pamela Anderson’s role as CJ) and Ilfenesh Hadera.  Unlike the TV series It puts the women partly to one side and instead panders to  Ephron’s huge female following in awe of his, admittedly extremely toned, body which remarkably appears even more sculpted than Johnson’s. Unfortunately for a male audience its hardly balanced because despite a couple of boob jokes about Daddario and Rohrbach (who appropriately is a Sports Illustrated model too) with the occasional flash of cleavage this is all a little vanilla when considering how heavily the TV series relied on its female stars. Together the team suspect that a local business woman Priyanka Chopra is up to no good when dead bodies litter the script with little intervention of a police investigation and it’s The Rock who uncovers her secret drug smuggling business at his beach with a corrupt councillor.

The TV show ultimately became self aware and a film version was ripe for self parody but with its modest budget has gone down the action comedy route and fails on both counts with the action not being anything to write a postcard home about and any comedy peters out after the first half an hour. It’s the dearth of jokes and decent action (despite one character meeting their maker in a style which wouldn’t have been out of keeping in an 80’s Shane Black script) but the sporadic action and weak jokes drags the movie to a slightly overlong 116 minutes. So it’s left really to the Johnson / Efron dynamic to carry this along and while both, when given the right material, are extremely good light comedians they have very little here despite four people writing the screenplay. It’s worse for all 3 female leads who evaporate into the background with little to do and even when the inevitable Hasselhoff and Anderson cameos crop up  they’re something of a let down. In its quest for laughs the film which has used a a load of profanity to no effect and  several candid jokes with full on shots of droopy male genitalia it then resorts to end credits outtakes most of which are the fluffing of lines as well as some scenes that have been deleted but all of which do little to salvage what could have been a far better film with sharper, funnier scriptwriters.