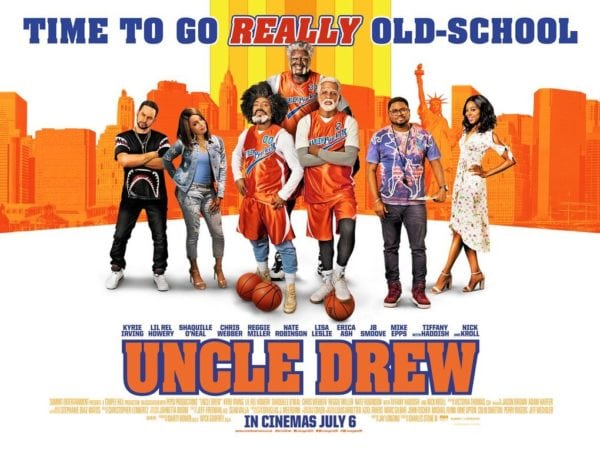 With the uplift in more ethnically diverse films and the massive success of Black Panther we now have Uncle Drew the latest in a long line of black comedies.  Uncle Drew is a long forgotten but supremely talented black basketball player who has long disappeared with no one knowing what happened to him. His skills are eulogised by a plethora of retired old school real life basketball players.

With Uncle Drew’s credentials now known we flash forward to Dax  (Lil Rey Howery), an amateur basketball coach, who works in sports shoe shop to fund his dream of coaching a team to win a championship. That is until his star player is poached by the gum chewing opposing coach Mookie (a loathsome Nick Kroll) who then also takes the rest of his team. Out of pocket, dumped by his girlfriend and in debt having bought expensive high tops for his recently departed team Dax accidently comes across an old man on a housing estate basketball court who runs rings round the young men.

It is of course the long lost legend that is Uncle Drew and together they set about getting Drew’s his old basketball team back together and in that respect it follows the Blues Brothers as they persuade ex players who are now a preacher, a kung fu teacher, a wheel chair bound man and a blind man to make up a new team for Dax. Beside the obvious disabilities all of them are elderly men. At least they would be if they weren’t wearing some of the least convincing prosthetics since Amanda Holden left the Britain’s Got Talent make up room. The pensioners are played by amongst others Shaquille O Neal and most of their ageing process seems to consist of wearing greying fright wigs.

It will come as a surprise only to someone who has never seen a film before that the geriatric players will eventually come up against Mookie’s team and the only surprise is quite how this got made. What’s even more of a puzzle is that the film’s title character is really more of a supporting role too. But in fairness this is more amusing than it sounds (especially a doddery dance off with some young clubbers) and certainly one of those films that’s better watched in the cinema as a communal experience than at home on your own.