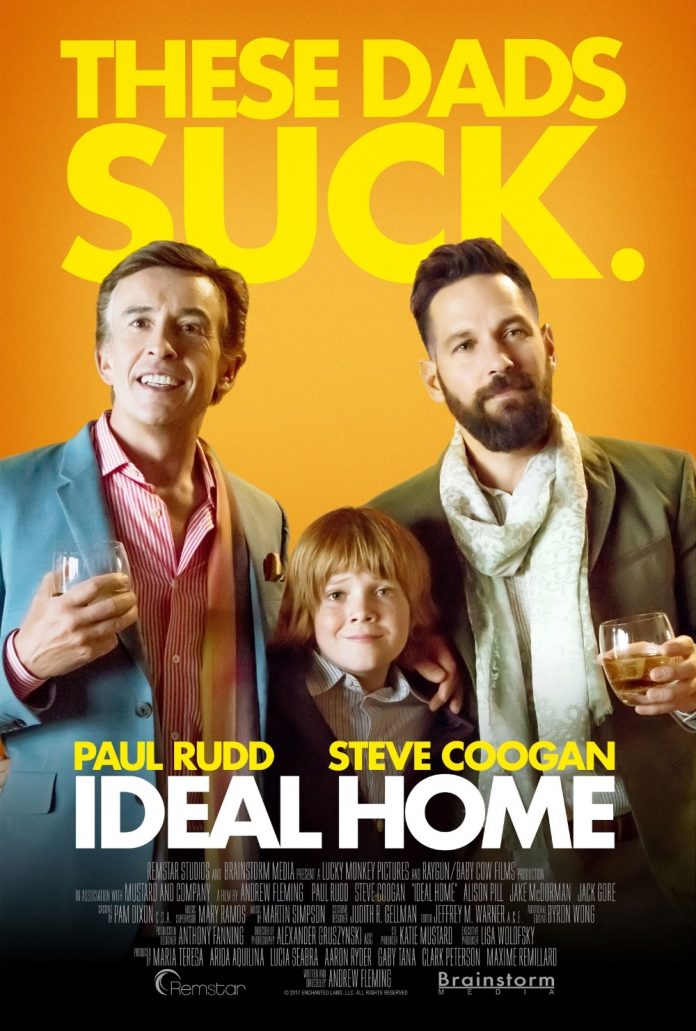 With the novelty of the TV show Big Brother having worn off and the only contestants now being the saddest of wannabe’s  who would willingly perform  in front of a supermarket  CCTV  if it got them a modicum of fame. The only interest for  viewers now would be to introduce a rabid Bengal tiger into the house which these days is from being an Ideal Home and the one presented in Steve Coogan’s new film is hardly any better.

Coogan plays the unlikely named Erasmus, a flamboyantly gay actor, who fronts a food channel’s  Mexican recipe programme and infomercials all of which are  directed by his boyfriend Paul (Paul Rudd) who grows increasingly irritated by Erasmus’s flirty campness. There are a number of half decent gags and one liners which soon evaporate when the film’s storyline bombshell lands –  that Erasmus  has a hitherto unknown grandson who is on the run  from US social services  when his father was arrested and jailed. The boy now finds himself at his grandfather’s house where he seeks refuge with the gay couple, so what follows is a clash of cultures  that Erasmus, now with unwanted parental responsibilities, has to man up for a duty he’s ill equipped for whilst Paul grows resentful of the boy impinging on their already strained relationship.

This is hardly an Ideal Home  for the child but what initially starts as a comedy very quickly reveals itself to be a ‘message movie’ as all party’s battle to overcome obstacles and the inevitable breakdown in the Paul and Erasmus’ relationship.

It’s a meandering 91 minutes that is intent on pushing its message that, to no one’s surprise, same sex parents  can be just as good as a male husband and female wife and it’s a message that’s hammered home with a jarring end credit photo montage sequence of same sex partners and their children which initially suggests that Ideal Home might be a true story (it isn’t) .

Co-produced by Coogan’s own company Ideal Home is a well intentioned but slightly optimistic story but the film desperately needs a sharper script as there’s ample opportunity for some waspish one liners from the bickering couple.  Steve Coogan (Mindhorn) is a supremely gifted comedy actor but this is another Hollywood film with a script that needed a script polish by someone like Henry Normal who produces much of Coogans’ work. At times the film plays like a massive product placement for Taco Bell take away’s with frequent references, consumption of its food and even a scene set in one of the restaurants to such a degree that Taco Bell would actually seem to be the child’s ideal home. It’s a missed opportunity and Coogan is far better than the material he has here.