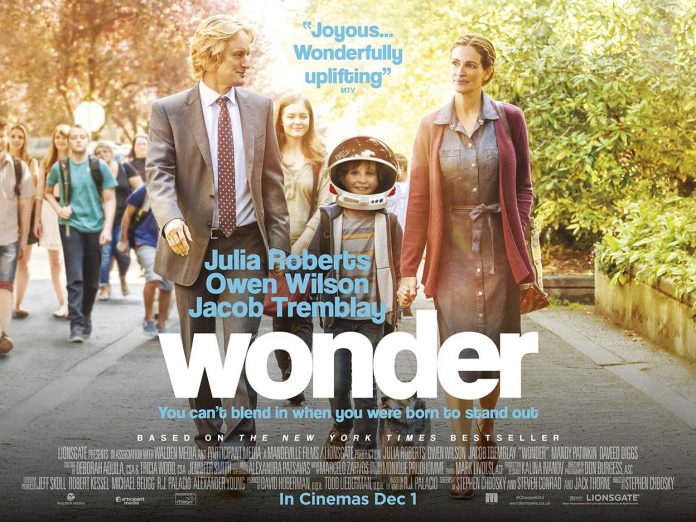 Kids can be mercilessly cruel. Take our Editor who was told by the school bully about the blue goldfish that lived in one of the toilet bowls only for him to peer inquisitively down the pan and find his head pushed further down and the toilet flushed. Bad enough to happen to any child but the Editor was at his son’s school’s parent’s day at the time.

‘Wonder‘ is based on the novel by R.J Palacio and follows Auggie, (Jacob Tremblay) a young lad born with severe facial disfigurement and has undergone numerous reconstructive surgeries and his mother (Julia Roberts) has home schooled him until the time comes when he has to go to school. It’s a scary enough experience for any child starting a new school but with the facial scars marking him out as different Auggie is even more wary. Reluctantly he meets the school headmaster, an avuncular and friendly figure endearingly played by Mandy Patinkin who is now a world away from his ‘Princess Bride’ days. He gets 3 children from his intended class to show him round and inevitably one of them , Julian (Bryce Gheisar) starts to ask intrusive questions about his face. It’s him who goes on to be Auggie’s main tormentor along with his little gang which bizarrely includes a kid with a ginger afro who inexplicably seems to escape any mockery. It’s no surprise that Auggie’s appearance singles him out  and its heartbreaking to see him at a lunch table on his own as the kids have spread a rumour that if you touch him you’ll get a disease.  The taunting is only too real and its only the support of his family that keeps him going with his mother who gave up a promising career as an illustrator to home school him. She’s ably supported by his father (Owen Wilson) in a rather underwritten role, who remains resolutely upbeat for his son and his big sister Olivia (Izabela Vidovic) who herself has been spurned by what she thought was her best friend, Miranda (Danielle Rose Russell) who has just returned from summer camp. Unusually the film occasionally borrows the narrative structure technique from Kurosawa’s ‘Rashomon’ where several incidents are seen from a different characters point of view when the film appropriates chapter headings for the different child characters (Auggie, Olivia, Jack Will & Miranda). All the characters have one reason or another for ostracising Auggie and the film drops in scenes that gives a glimpse into pressure on the kids from outside sources to steer clear of Auggie and the film has a secondary storyline involving his sisters burgeoning love story and her broken friendship which all successfully intertwine with Auggie’s .

Though this is a fictional story it’s much like 1985’s ‘Mask’ with its subtext of never judging a book by its cover with the kids having far more going on below the surface but unlike ‘Mask’ it doesn’t wallow in sadness with a tear jerking finale though its not without its occasional moments. Instead this is far more uplifting and life affirming. This will appeal to children too and the audience we saw it with was heavily weighted towards a younger audience who were utterly rapt with the story.

For all its gentle approach this is one of the most beguiling and wonderfully warm films you’ll see in a year of bombastic blockbuster bombs. Wonder-ful.