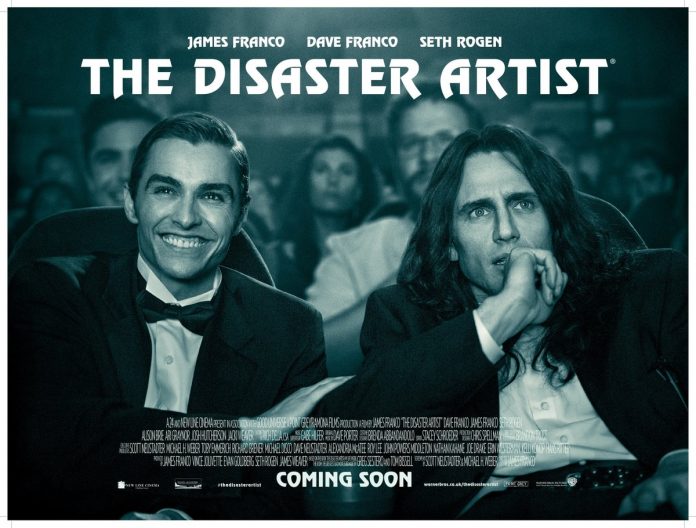 Few would doubt that a director like Michael Bay would be wholly unsuited to directing an arthouse film or that Amanda Holden would be ill equipped to be a talent show judge (oh, too late) but not one is in any doubt that aspiring actor/director Tommy Wiseau has directed and starred in possibly one of the worst films ever made. ‘The Room’ (NOT the Oscar nominated, Room) was a self financed film released in 2003 and was unintentionally hilarious in its awfulness. Released for one week Wiseau paid for it to stay in theatres for another week as it would then make it eligible for Oscar nominations. To no one’s surprise, except maybe Wiseau, it earned none.  Costing $6m the film earned a pathetic $1800 on it release but the film quickly became a cult on the midnight circuit with people going to see just how bad it is.

‘The Disaster Artist’ is based on the book of the same name and is about the tribulations of the making of the film which went way over its budget which Wiseau had financed from sources which remain a mystery to this day. That, in itself, was one of the mysterious of the enigmatic Wiseau who was of indeterminate age and equally indeterminate origins though he insisted he was American despite him sounding like Christopher Walken channelling Borat. It’s easy to see the appeal for  James Franco in playing Wiseau in a role that is a  comic tour-de-force in this his latest outing as director.

From the start it sets the tone with a number of Hollywood names that include JJ Abrams and Kevin Smith praising The Room before it segues into Dave Franco (James real life brother) as real life actor Greg Sestero in a dreadful audition at a stage acting class run by  Melanie Griffith, who for unknown reasons sits in the shadows, in one of several cameos that includes Zak Efron (Baywatch), Bryan Cranston (who co-starred with Franco in ‘Why Him?‘) and Sharon Stone.

He’s quickly followed by Wiseau in an unjustifiably confident audition which is hilariously bad involving him wailing away and throwing himself off the lighting rig.  Sestero is smitten with Wiseau’s swagger and they strike up a friendship and move to LA where they try to break into the movies. But whereas Sestero finds limited success with an agent to who takes him on Wiseau is understandably laughed out of every audition he attends with particular highlight being an impromptu audition for Judd Apatow in a restaurant. Refusing to believe that his looks are more akin to a villain than the leading man he believes himself to be. It’s a credit to Franco that as lacking in any self awareness he’s also to a certain degree somewhat sympathetic. His constant rejection and barely contained envy of Sestero’s success spurs him on to making his own film, the lamentable ‘The Room’.

Wiseau is a mass of contradictions, bold yet secretive, arrogant yet insecure and this all comes to the fore with the making of his movie which provides the bulk of the film. Much of the humour comes from Wiseau’s delusional belief in his own non-existent abilities exacerbated by his ludicrously comic accent

With support from Seth Rogen as his disbelieving script supervisor this is an engaging if slightly overlong film about a film but unlike its source film this is certainly one of the best comedies this year.