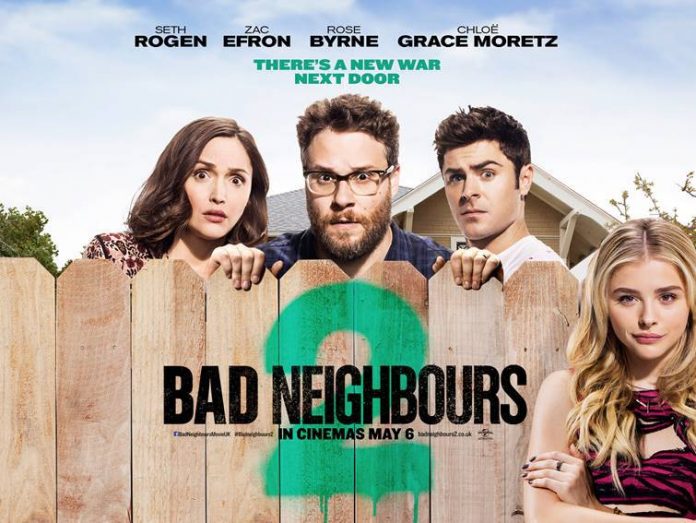 Our Editor is of a certain age where he had a government funded student grant and the height of debauchery at that time was to wear a traffic cone on your head whilst being pushed round in a shopping trolley whilst clutching a giant can of Watney’s Red Barrel under his arm. Apart from a beer gut and a comprehensive selection of road furniture he has acquired he hasn’t changed a bit with a grant being replaced by an expense account. However things have certainly changed since he was in college. Decimalization for a start (‘I’m not that old, you cheeky sod! – Ed). However the level of debauchery certainly has and after the success of ‘Bad Neighbours’ a couple of years ago raking in $270m it meant a sequel was inevitable with Zac Efron, Rose Byrne and Seth Rogen all returning joined this time by Chloe Grace Moretz as a new student disillusioned with the sexist Frat boy parties. So with two friends and Zac Efron,  now something of a slacker since leaving college,  starts up her own independent sorority house. Unfortunately for Rogen & Byrne it’s next door to their house which they are in the process of trying to sell to a couple who have a 30 day period when they can pop in unannounced – so raucous parties at the neighbours house are the last thing they need to see. What could possibly go wrong ?

So when their perfectly reasonable request for the girls not to have a party for 30 days is ignored Byrne & Rogen finds themselves pitted against Efron and the sorority girls.

The contrast between parents with young children and carefree students are at the heart of many of the scenes but the generational gap is brilliantly illustrated as Efron finds where he gives the girls a fatherly type speech not realising he’s being ignored whilst the students text each other as to whether to evict him…….. which he is and is forced to switch allegiance to Rogen and Byrne and are further assisted by Ike Barinholtz as Jimmy who also returns.

Fans of Seth Rogen’s  style of comedy will not be disappointed as this is as profane  as can be expected with the usual penchant for drug culture and lewd jokes many of which are absolutely hilarious with many throwaway lines being just as good (listen out for the Bill Cosby joke). Rogen’s schtick has served him well with back to back hits ‘This is the End’, ‘Neighbours’ & even ‘The Interview’  although ‘The Night Before’  was something of a misfire. Many of the jokes hit the mark whether they be slapstick or jokes at the expense of parenting with a running joke about a sex toy throughout. But even a scene involving tampons, which may leave many men feeling slightly queasy,  makes a pointed comment about the laddishness of gags featured in gross out comedies.

Efron has a likeable screen persona and it would appear that, yet again, he’s been contractually obliged to be stripped to the waist in many scenes which is sure to please his legion of fans but inspire envy from the rest of us who are closer to Seth Rogen who also has several scenes in a similar state of undress. In addition Moretz is a welcome screen presence bringing an innocence to the role of the student who wants to buck the system but actually is just a sweet girl at heart who, in the words of the leading 20th century philosopher Cyndi Lauper, tells us that actually, ‘Girls just wanna have fun’.