Horrible Histories is neither Amanda Holden’s acting CV nor is it our Editor’s internet usage but is a big screen version of the massively popular children’s TV series which in itself is based on the equally popular books. Whereas the TV series was episodic with its choice of sketches here the Horrible Histories The Movie Rotten Romans films makers have concentrated on the era of the Romans and all starts pretty well with a casting coup of Derek Jacobi playing ailing Roman emperor  Claudius and sending up his celebrated TV portrayal of the man and is bumped off by his wife Agrippina (another coup getting Kim Catrall who’s clearly having a whale of a time) and her upstart wannabe emperor son Nero (Craig Roberts). 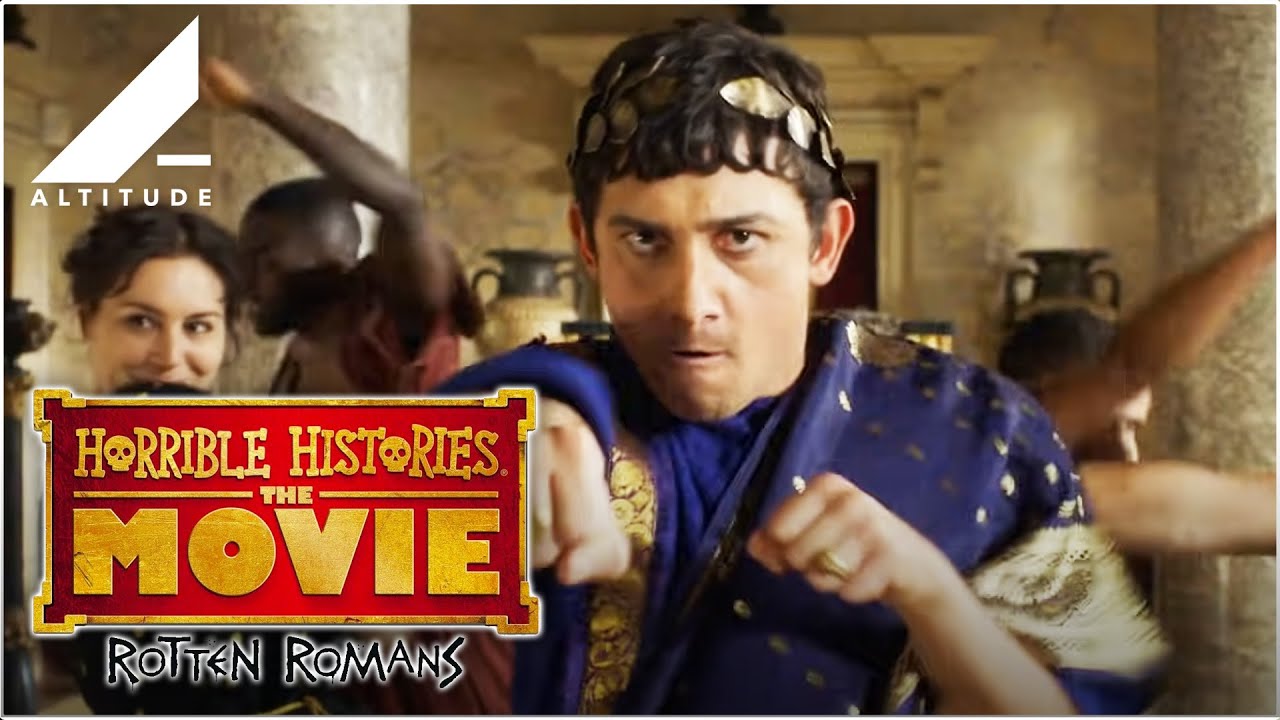 It’s only when he ends up washing his face in horse piss – yes, that is the level of the humour – due to Atti a roman teenager who’s thrown into the roman legions as a soldier and packed off to England to repress a rebellion led by Boudicca (Kate Nash).  Now kids who are avid fans of the series will know what to expect and there a level of daft Dad jokes and scatalogical jokes that they will love and to deliver them the film has landed a load of well known TV comedy faces that includes Lee Mack, Nick Frost, Rupert Graves, Alexander Armstrong, Alexander Armstrong, Sanjeev Bhaskar, Chris Addison (whose feature film directing debut was The Hustle)  and one of our favourites , actor Tony Way  who was great in the recent Ray & Liz. 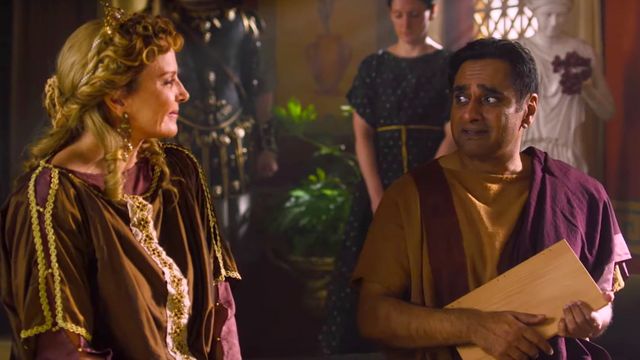 So they all get into the spirit of things and when Atti becomes prisoner of Orla a teenage girl keen to become a warrior but her Dad won’t let her,  Atti has to help her outwit the Romans to stay alive and in way this is a bit of a female empowerment story a la the #TimesUp movement. There’s a glimmer of a love story here which is left undeveloped probably because the age group this is aimed at would turn their noses up at that sort of thing.  Written by Caroline Norris & Giles Pilbrow both of which are very experienced in TV comedy but Horrible Histories The Movie Rotten Romans has a few chuckles but relies heavily on running jokes not all of which get funnier as the film progresses and there’s a sense that the songs are there purely to pad out the running time to feature film length of 92 minutes. The songs aren’t great either and the song finale that preaches about tolerance, equality and co-operation with the Romans whilst all very worthwhile has a touch of a Brexit remainers campaign about it. It does move along swiftly and the production values are decent for a TV adaptation but when you have Lee Mack in the cast whose sitcom has more laugh out loud jokes in half an hour than many films do it seems a crying shame that he was not approached about a script polish.

It’s a pity as the Horrible Histories do an excellent job of subverting the genre by giving history lessons disguised in a comedy wrapper but this focuses quite a lot on the toilet humour and there are a few too many nods to well known Monty Python jokes and the end credits is an out and out lecture by a rat puppet about what happened to Boudicca. Directed by Dominic Brigstocke an extremely good award winning comedy director with credits that include the TV series of Horrible Histories as well as Reggie Perrin, Ricky Gervais & Jimmy Carr stand up shows, Green Wing, Smack the Pony, I’m Alan Partridge  and The Mrs Merton Show and his is a safe pair of hands that gets the best out of the jokes. Fans of the series will like this and whilst Horrible Histories The Movie Rotten Romans is not horrible it, like a teachers comment on a child’s school reports, could do better.