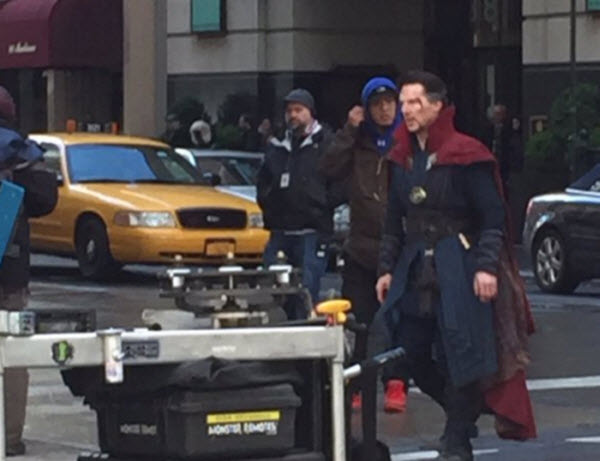 It seems that although the recently released Doctor Strange was in the US the film was shot nowhere near there.  In fact much like The Avengers: Age of Ultron which was filmed on the front lawn of the Metropolitan Police’s Hendon based training school Doctor Strange was shot on sets at Longcross Film Studios in Surrey.

The film has pushed the visual effects envelope too as the lead character explores different astral plains and to do this the production team needed the controlled environment of a sound stage and the usual green screen technology with plate shots also filmed in London and New York to provide the backgrounds for these sequences. Additionally, streets in Hong Kong were photographed and mapped specifically for effects purposes and merged with aerial shots of the city shot at night and the cityscapes of the astral plains were inspired by the surreal architectural drawings of artist MC Escher with those images shot in New York.

For the scenes in Nepal the crew went out to the country to film scenes in the capital Kathmandu but as the local film industry is not particularly well developed over there the crew were forced to shoot almost in guerrilla style. Preparation for this part of the shoot took place before the earthquake that struck the country in May 2015. James Lengyel returned to the city a few weeks later to assess the quake’s impact on their location options as Marvel were still keen to shoot there to support and promote Kathmandu. “To take advantage of the magical colour and unpredictable vibrancy of Kathmandu, this was more naturalistic filming, with less street control – Strange journeying through the real streets and temples of the city,” said Lengyel.  “The limited filming infrastructure for a studio film [in Kathmandu] required us to establish unorthodox shooting methods but we received fantastic and enthusiastic support from the city and our local production services Durbar Associates and Mountain Tiger.”

It seems though that south-east England will be used less and less now though as MArvel has started using the US city of Atlanta as its main production base, which is one of America’s main filming hubs.

Here’s Benedict Cumberbatch introducing the film at the London premiere……