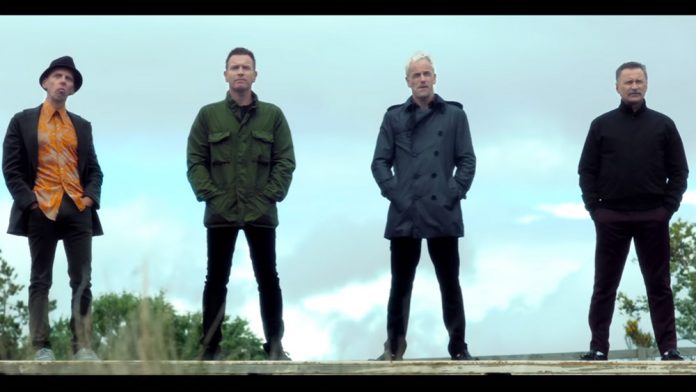 Distressed at the failure of his mission the killer cyborg hooked up with 3 drug raddled Edinburgh drop outs and a equally psychotic hard drinking criminal and indulged in all manner of hedonistic behaviour. Thankfully that  was never going to be the basis for Terminator 2 though frankly it would have been a vast improvement on Terminator Genisys but it’s still no reason why Trainspotting, the iconic Brit flick of the nineties was been monikered with the T2 tag. Even something like 2rainspotting or Train2potting would have been better. But I digress……

Twenty years later we have a belated sequel to a film that captured the hedonism of nineties brit pop and comes with much expectation. With the original film ending with Ewan McGregor’s Renton having swanned off with thousands of pounds from a drug deal and apart from leaving Spud (Ewan Bremner) with £4K the other two, Begbie (Robert Carlyle) and Sick Boy (Jonny Lee Miller) with nothing and both are simmering with rage 7 thought of revenge at what their friend did to them.

Opening in a similar vein to the original only this time Renton isn’t running from the law but running on a treadmill in a gym. He’s the only one who appears to have changed his druggy lifestyle and he ironically flies back from Amsterdam to Edinburgh where he finds the others have changed little or in Spud’s case not at all as he still cuts a pathetic-figure addicted to drugs and at the mercy of teenagers dealing to him on a rundown estate. Having separated from his wife and son Spud decides to put an end to it all with an overdose but is saved by Renton coincidentally calling. Their friendship renewed Renton visits Sick Boy who now owns a pub whose business who is so poor that he runs a sideline in blackmailing men using his girlfriend to catch them in compromising positions. Sick Boy’s welcome is a wholly different one to that of Spud’s. Throw into the mix Begbie, still incarnated in prison and still raging at the world, made even worse that he’s still remanded after 20 years inside and decides to make good his escape. Inevitably his and Renton’s paths will cross.

With both the audience and the characters now older and in different places in their lives director Danny Boyle and his scriptwriter John Hodge have used the film to look back on the foursome’s past which inexorably binds them all together. So we have frequent throwbacks to the original film frequently using shots from it. As one of them says, ‘the past is something you forget’ but here they never do and whether it be the soundtrack (Born Slippy is remixed by The Prodigy’s Liam Howlett) and there’s a sly nod to Iggy Pop’s Lust for Life when Renton for the briefest of moments drops a needle on a vinyl record playing the for a split second the briefest snatch of the instantly recognisable drumbeat. It’s not the only back reference to the first film with knowing nods to that toilet scene. Indeed toilets play a significant role in the film – Renton & Begbie find themselves in neighbouring cubicles and a toilet comes to Rentons aid at a crucial moment though not as you might expect. It borders just on the right side of becoming  too reverential to itself.  Each of the actors are still as good in their defining roles as they ever were and  there are cameos from writer Irvine Welsh as well as Kelly Madonald with an ironic joke about age bearing in mind her role in the original.  The film frequently ponders about them all aging notably in Renton’s riff on his Choose Life speech but here he looks at youth culture from the perspective of a middle aged man unable to comprehend what youth culture is all about now.

The first film was so iconic that any sequel has a lot to live up to and this has an almost impossible job in doing so. Boyle still throws in creative flourishes with his camera nearly always unbalanced and an end shot which is giddily hypnotic and with its Iggy Pop remix you can’t help but smile. This should appease those who have such fond memories of the original though quite whether this has quite caught the zeitgeist for current twentysomethings is unlikely. As Sick boy tells Renton ‘ You’re a tourist in your youth’ . He’s right.