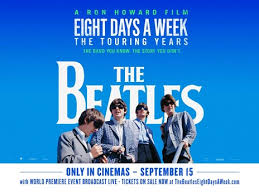 Mop topped, tune chanting warblers the Beatles, as fab four-tastic as they were, did have some rather dodgily titles songs. ‘Hello , Goodbye’ seems they couldn’t make up their mind, ‘Strawberry Fields Forever’ showed a woeful grasp of seasonal agriculture and the less said about ‘Come together’ the better. Ron Howard’s  new documentary ‘8 Days a Week’ if nothing else shows that their calendars were over egging things by at least 24 hours. However after 50 years of the band there can be little left that hasn’t been forensically examined and there can be little footage left that hasn’t been unearthed so the films angle here is the touring years.  With new interview footage from McCartney & Starr, some archive interviews with Harrison though strangely nothing from Lennon the film intersperses  clips from their concerts with their talking heads. The concert footage despite having all been seen before is a great reminder of the pressure cooker environment of their gigs with fans on the brink of hysteria than make today’s fans look demure in comparison. If nothing else there’s a new found delight in seeing Ringo Starr’s drumming because the way he goes at the those drums feels like a warm up for the madness of The Who’s Keith Moon without the horse tranquilizers.

But the film quickly makes apparent the bands obvious enjoyment of playing live which quickly declines over the next few years culminating in the Shea Stadium gig where they cut a solitary figure in the middle of the ground surrounded by a wall of insanely screaming fans as their music is played over tin pot tannoys. As McCartney says early on, ‘in the beginning it was quite simple but by the end it was quite complicated’. With the band having to be whisked out of the stadium in an armoured van as they rolled about in the back it was Harrison who first pipes up that they can’t go on like this and further emphasised when Lennon wrote what turned out to be the autobiographical ‘Help!’ encapsulating exactly how the tours were making him feel.  Documenting their growing disenchantment with how the touring made them feel it’s only their first film 1964’s ‘A Hard Day’s Night’ which offered them any relief partly due to the novelty of it but by the following year when they filmed ‘Help!’ they were totally bored and with their tax affairs now becoming a topic their advisors regularly spoke to them about, hardly the most rock n roll lifestyle, and they set scenes in Bahamas as a tax write off. It was also where they indulged in cannabis which explains why their behaviour in some of the scenes from the film that were shot there are so off the wall. In fact smoking is the one surprising thing that appears throughout because there’s little archive footage where the four of them aren’t puffing away on cigarettes like their lives depend on it …or not as the case might be.

The documentary briefly touches on the bands stance supporting the civil rights movement as well as the ‘bigger than Jesus’ comment by Lennon which sees him in unusually apologetic mood when the band realise that the US is quickly turning against them and their records sales are only ating as fuel for bonfires as they’re ceremoniously set alight.

The film puts into perspective today’s crap popstars and their crap self adulating documentary’s  no names mentioned, oh alright then… Justin Bieber….all sent up mercilessly in the recent PopStar:Never stop never stopping.

Despite most of the footage having been seen before there’s a certain poignancy to the last scene where the band, having stopped touring for some years, play one last time atop their office roof in central London and doing it for the sheer fun and enjoyment of playing music again on their own terms . For dedicated fans this is a must see and anyone else it’s a a reminder that even after 50 years there’s never been a band like them.