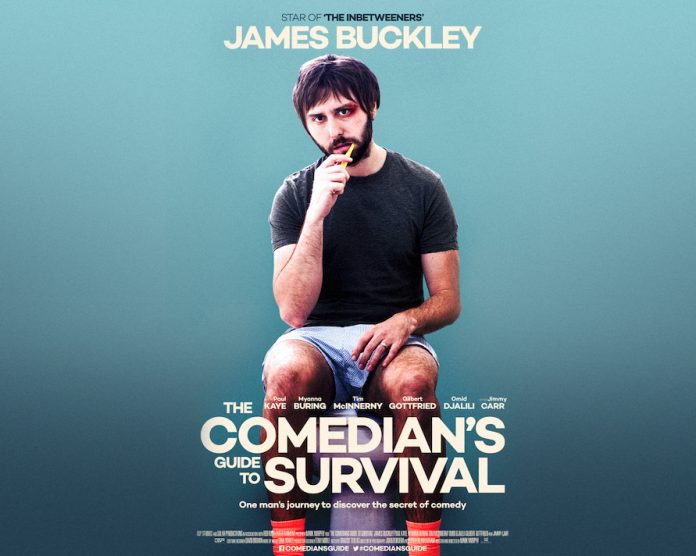 Incredibly this is not the life story of our Editor surviving a near fatal beating from ‘A’ list stars minders at press junkets but a loosely based series of events in the life of James Malinger early days as a stand up comedian on the club circuit whilst holding down a day job as a writer at a magazine with a near psychotic Editor played with gleeful odiousness by a potty mouthed Paul Kaye.

Starring James Buckley as the hapless hopeless wannabe comedian Mullinger this is a small budget British film and follows his efforts to break into the big time. His career is hardly helped by a barrage of weak jokes (which we never hear in any great detail) but also the fact that he can’t stop wetting himself in front of an audience when heckling him. If that isn’t bad enough there’s someone filming these incidents on their phone and downloading them onto YouTube. The only laughs he actually gets are at his expense from the thousands of YouTube hits.  With his gloriously vile boss giving him an ultimatum to pack in the comedy and take the deputy Editor job he has salt rubbed into the wound when he’s given an assignment in the US to interview famous and successful comedians.

Like many films about stand ups few are actually funny, even Tom Hanks in Punchline (one of his rare misfires) and this is no different because as good as Buckley can be the goodwill he’s been carrying since The Inbetweeners is starting to wear thin. Having had roles in far from great films like The Pyramid and a blink and you’ll miss it appearance in the recent Popstar: Never Stop Never Stopping he really needs to get more selective about the roles he’s taken and with this he even executive produces.  Unfortunately for him he’s overshadowed by Paul Kaye in a monstrous role but also the under rated but always great Kevin Eldon as his American chauffeur. Even the quirkily twitchy Mark Heap puts in yet another great cameo which only serve to show up Buckley’s shortcoming in such a bland role. The script has also been co written by the real life Mullinger who has gone on to success in the US himself but here, if this is anything to go by, it’s a wonder he has made it. Its best moments are usually the throwaway 4th wall breaks where other characters in the film wonder who he is talking to. But as good as these moments are the antithesis is the rather annoying line he spouts starting, ‘the comedians guide to survival says….’ and then spouts a truism which isn’t.  The only truism he doesn’t spout is that the comedians guide to survival is to make the audience laugh and to this end the film is occasionally intersperses the drama with real life internationally renowned stand ups such as Michael McIntyre, Ricky Gervais, Louis C K, Jerry Sienfield, Peter Kay & Billy Connolly commenting on the trials and tribulations……..at least you think they might have used some household names like these but instead we get  Aussie loudmouth Brendan Burns,  comedy vacuum Gina Yashere who thankfully emigrated to the US and Gilbert Gottfried who delivers his lines like he’s having haemorrhoids removed. The only decent comedian featured is Omid Djalili who is curiously restrained in this and Jimmy Carr who introduces a Mulliger onto the stage late in the proceedings….. And it s shame because there is surely a decent film to be made about stand up comedy but this isn’t it and even at a brief 90 minutes even this outstays its welcome.